The E-Pace has smaller dimensions than the F-Pace, at 4.39 m long, 1.98 m wide and 1.65 m high. The trunk has a capacity of 550 liters. Therefore, it is called to compete with premium models like the Audi Q3, BMW X1 or Range Rover Evoque, vehicles that have been very well received by the public. The E-Pace plays with the trump card of a sporty design, similar to its big brother, the F-Pace. Visually it is very compact.

The engine range will consist of three diesel engines with power outputs of 150, 180 and 240 hp and two petrol engines with 249 and 300 hp. The traction can be front or all-wheel drive, and the gearbox is a six-speed manual or automatic torque converter with nine ZF-sourced ratios. 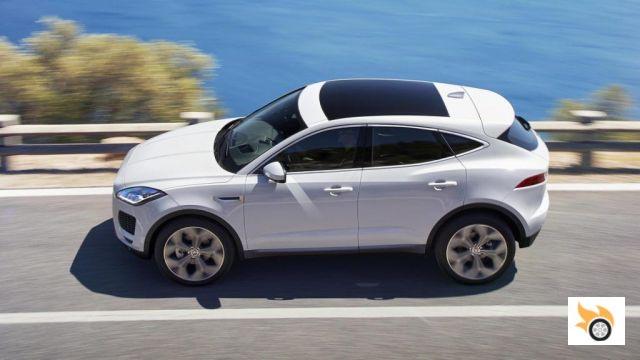 The adaptive suspension system, which Jaguar calls Adaptive Dynamics, evaluates vehicle movements every 2 milliseconds and calculates the necessary damping force every 10 ms, so that we get a continuous adaptation of the suspension. This system is part of the Jaguar Drive Control, which allows us to adjust various vehicle parameters in addition to the steering. It has four operating modes: Normal, Dynamic, ECO and Rain, Ice and Snow, the latter optimized for driving in low grip situations.

Another of the systems that equips is a selective torque control that, acting on the brakes, simulates the action of a self-locking differential. These systems are part of the optional equipment and a fixed-stiffness damping system is fitted as standard.

The chassis is made of high-strength steel, aluminum and lightweight composite materials, achieving a fairly high coefficient of torsional stiffness. The maximum towing weight -for braked trailers- is 1,800 kg, the trailer towing system is not available on the two-wheel drive versions. The platform is derived from the one used in the Land Rover Discovery Sport and shares many parts with the Range Rover Evoque. 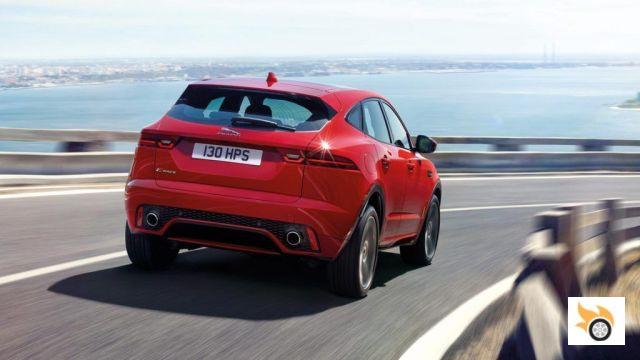 Depending on the engine there are two all-wheel drive systems. For the less powerful versions -the 150 and 180 diesel and 249 hp petrol- we have a system of the same type as the competition, which is able to send almost 100% of the torque to the rear axle when it loses grip in front. For the rest of the versions it equips the same system that Land Rover uses in the Evoque. It is called Active Driveline and has a rear differential whose clutches are bathed in oil.

The versions with automatic transmission can add an additional control, called All Surface Progress Control (ASPC), which optimizes the movement on low-grip surfaces and maintain a constant speed when driving on steep slopes. This system has an operating mode designed for starting on slippery surfaces called Low Friction Launch.

Like the F-Pace, it can carry the Activity Key, a bracelet resistant to shocks and humidity designed to wear it when we carry out an activity in which carrying the car key is uncomfortable. With this system we can open and close the vehicle by simply passing the bracelet over the rear license plate. 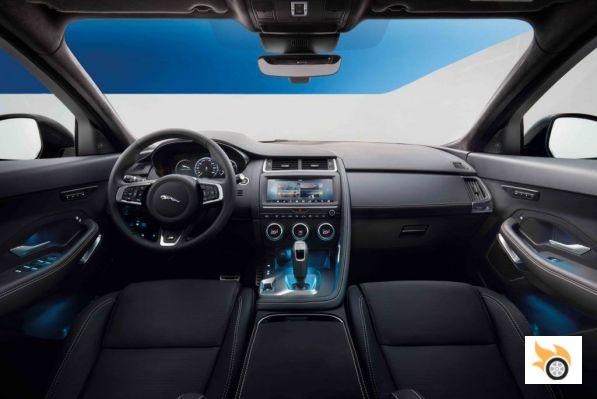 A new Thin-Film Transistor Head Up Display (HUD) system, which according to Jaguar, allows 66% more information to be projected onto the windscreen. A digital instrument cluster with a 12.3-inch TFT screen is also available. The Touch Pro infotainment system mounts a 10-inch screen whose display is capacitive - like that of a mobile phone or tablet - so it allows for quicker and smoother movements.


It is equipped with a number of safety and driving assistance features, such as the pedestrian and obstacle detector with emergency braking, the cross-traffic detector and the pedestrian airbag, which is the first time it has been fitted in a model of the British brand.

In the first year of marketing of this model, the brand will offer a special version called First Edition for the 180 hp diesel engine and 240 hp petrol combined with the automatic gearbox. This version includes the R-Dynamic SE package, 20-inch alloy wheels in Satin Grey with double spoke and mirror polish, Windsor leather in Ebony. It is available in three exterior colors: Yulong White, Santoriny Black and Caldera Red, the latter is exclusive to this version.


The start of production of this model is scheduled for the end of this year and the first units will be delivered in early 2018, although orders are already being accepted. Its starting price will be 37,450 euros for the 150 hp diesel version with front-wheel drive and manual transmission. An equivalent BMW X1 is priced slightly lower - at around €35,000 - and the corresponding version of the Q3 starts from €31,195, a much lower price. The Mercedes-Benz GLA 200 d starts at 33,650 euros. All three rivals mentioned are cheaper than the Jaguar and can be cheaper still as they offer less powerful versions. The closest is its cousin, the Range Rover Evoque which costs 36,250 euros in its access version.