Citroën presents the C5 Aircross to the Chinese public

If we move on to analyze the details of this new model, we find a car that uses the EMP2 modular platform of the PSA group that use models like the Peugeot 3008, 308, 2008 or Citroën C4, including the Opel Grandland X. However, this model equips unique elements, among which is the suspension system with Progressive Hydraulic Cushions -Progressive Hydraulic Cushions- which debuts this model, and thanks to which the brand ensures that it will be the most comfortable model in its segment, as has become tradition in the brand of the chevrons.

For the development of this suspension 20 patents have been registered, although its operation is quite simple and is not related to the mythical Hidractiva.

In addition to the suspension system, the C5 Aircross will be equipped with interesting features such as a system that purifies the air entering the passenger compartment - AQS or "Air Quality System" - by detecting particles and automatically adjusting the air circulation mode inside the passenger compartment. It will also be possible to see the quality of the air entering the cabin on the central display, a system Citroën calls "Clean Cabin". This is a major selling point in China, given its rampant urban pollution.


The vehicle's dimensions are 4.50 m long, 1.84 m wide and 1.67 m high. In terms of interior space, with a wheelbase of 2.73 m the brand claims it will be the most spacious in its class in the rear seats with a legroom of 201 mm and a distance of 954 mm. As for the trunk, it offers a simply discreet capacity with 482 liters in five-seat configuration -some rival, even smaller, offers a slightly higher trunk capacity-. If we fold down the rear seats, we can get a completely flat cargo area. We don't have pictures of the open trunk.

In terms of engines, 165 and 200 hp petrol engines will be offered with a 6-speed torque converter automatic gearbox -EAT6- for the Chinese market, where it will arrive before the end of this year. It is worth mentioning a plug-in hybrid version with all-wheel drive consisting of the 200 hp petrol engine and two electric motors, one for the front axle and one at the rear, which will provide a combined power of 300 hp, making it the most powerful Citroën in history. It will be able to drive in all-electric mode up to 60 km, after that it is no longer the most powerful in history. For the European market we expect more discreet engines and obviously some diesel.

Like the Peugeot 3008, will equip the Grip Control system, an electronic management system ESP with different modes adapted to various terrains, especially in difficult terrain such as snow or mud, specializing in front-wheel drive. It will also be linked to a Hill Assist Descent Control (HADC) that keeps the vehicle at 3 km/h on steep ramps. This feature makes more sense in an SUV than in a crossover, but it can be useful from time to time.


As usual, it includes the latest driving assistance systems such as speed and traffic sign recognition with an interesting function that allows you to send the speed limit to the speed regulator/limiter with a simple gesture. Other systems included are the city emergency braking assistant, the blind spot monitoring system, the warning of involuntary change of active lane or the 360-degree vision system. 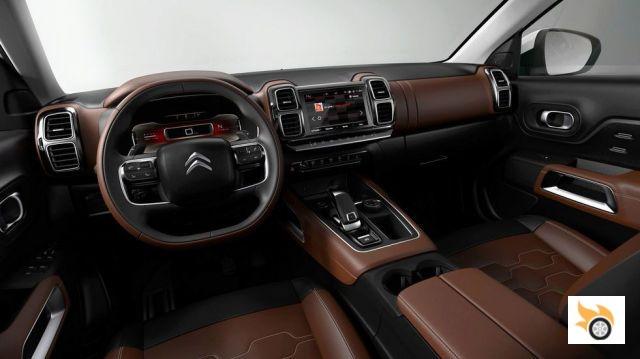 On the subject of prices and equipment the brand has not yet provided information, for it will have to wait a little longer.