The new Audi RS5 incorporates numerous improvements over the previous generation despite being continuous in terms of design. Designers have been inspired by the Audi 90 quattro IMSA GTO for the exterior design of the car. This second generation RS5 has grown in dimensions reaching 4,723 mm long and 1,360 mm high, which is an increase over the previous version of 74 and 6 mm, respectively. The width remains virtually unchanged at 1,861 mm. The wheel arches have been widened by 15 mm compared to the previous generation.

As new stylistic features we find a new front grille - known as Singleframe - wider and flatter than before and with honeycomb design in which we find the logo of quattro and RS5. Below this grille is a trim in contrasting color. Air intakes have also been incorporated in the corners of the headlights.

But let's stop talking about design and move on to what really matters in a car of this type, the engine and chassis.

The previous 450 hp naturally aspirated 4.2 V8 FSI has been replaced by a twin-turbo V6 2.9 TFSI of identical power, with a maximum torque of 600 Nm - 170 more than the previous one - between 1,900 and 5,000 RPM. This engine transmits power to all four wheels via an 8-speed Tiptronic automatic gearbox with torque converter.

The engine is derived from the 3.0 TFSI used in the Audi S5 and has been slightly modified to withstand the higher forces derived from this power. The valve lift has been shortened by 3 mm, staying at 86 mm. The cylinder liners are made of cast iron and the main crankshaft bearing grows 2 mm in diameter. The block is made of an aluminium-silicon alloy and weighs 182 kg, a 31 kg reduction over the previous V8.


The V6 is arranged at 90 degrees and the two turbochargers are located between the two cylinder banks; each turbocharger acts on one cylinder bank. With this configuration it is possible to place the exhaust of the cylinders on the inside and the intake on the outside, thus achieving a faster response to the accelerator. 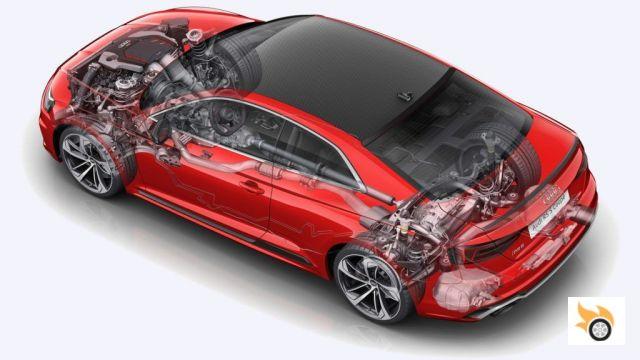 Equipped with a new combustion system called B cycle, which consists of an opening of the intake valves for a shorter time, the compression phase begins later than usual allowing a compression ratio of 10:1, a high value for a turbo engine. The expansion phase takes place over a longer period of time, which improves efficiency.

It also incorporates a two-stage valve lift system called Audi valvelift system (AVS). At high loads and speeds the system closes the inlet valve later, remaining open between 130 and 200 degrees of crankshaft rotation, for its part the valves increase their lift of 6 to 10 mm. The centered position of the injectors inside the combustion chamber in the area of the inlet valve makes it possible to modify the mixture in the fuel charge. The gasoline is injected at a high pressure of 250 bar, this means that the fuel is applied very pulverized, taking advantage of its combustion to the maximum.

The Audi RS5 has separate cooling circuits for the crankshaft housing and cylinder head, being integrated exhaust manifolds in this, which reduces exhaust temperatures and therefore fuel consumption. 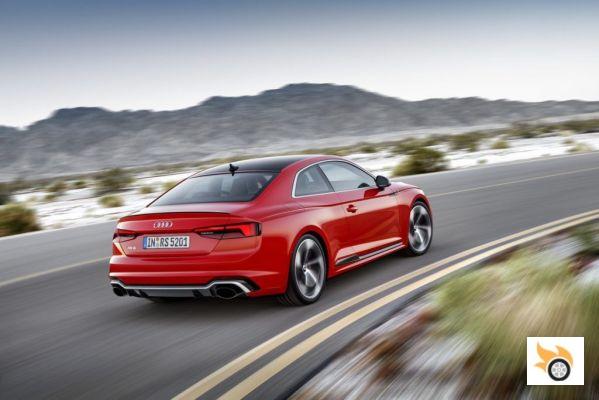 The quattro all-wheel drive system ensures that the vehicle moves as efficiently as possible. Under normal conditions it sends 60 percent of the torque to the rear axle and 40 percent to the front. If the system detects a loss of grip, it is able to send a maximum of 85% of the torque to the front axle and 70% to the rear. To put the icing on the cake, a sport rear differential can be chosen as an option, which distributes the torque between the two wheels of the rear axle. It also has a wheel-selective torque control system that applies selective braking to the inside wheels during cornering.


With all the arsenal of technology that incorporates mechanical level, the Audi RS5 gets an acceleration of 0 to 100 km / h in 3.9 seconds and a top speed electronically limited to 250 km / h, which can be increased to 280 km / h with an optional Dynamic package.

If we talk about chassis, we must say that the front axle mounts an improved five-link structure, on the rear axle the previous trapezoidal suspension has been replaced by another five-link. The suspension of the car lowers the height of the body 7 mm compared to a normal A5, and can optionally choose another suspension with a sportier fit and steel springs with adjustable dampers in three stages through the Audi Drive Select, connected to each other by diagonal oil ducts and a central valve. 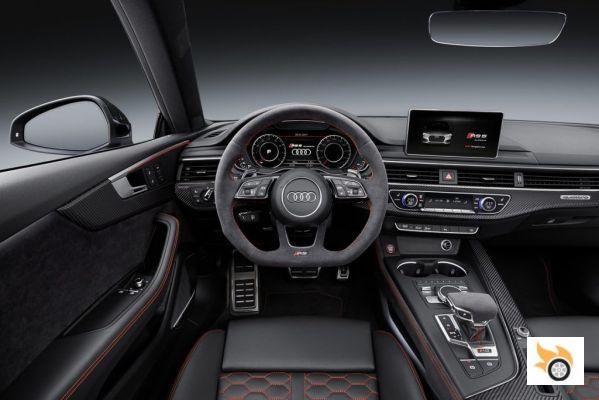 The RS5 has a weight of 1,655 kilograms, managing to reduce it by 60 kilograms over the previous generation. We can optionally choose a carbon roof with the structure seen, reducing the weight of the vehicle by 3 kilograms more.

In Spain are part of the standard equipment 20-inch wheels with various designs with 275/30 R20 tires, we can also mount a 19-inch 265/35 measures. The RS brakes are fitted with 375 mm drilled steel discs on the front wheels and 330 on the rear with six-piston calipers painted in black or red, the latter optional. A 400 mm ceramic brake system with six-piston calipers is also available as an option.


Once explained the technical aspects of this RS5, we must say that in the other elements is quite similar to the other versions, the differences we can see at a glance are various design details both inside and outside, so that aspects such as habitability or elements of driving assistance or infotainment remain virtually unchanged from other versions, including the infinite list of optional equipment that can make us increase the bill for the car in several tens of thousands of euros.

Speaking of price, this Audi RS5, which arrives in dealerships in June 2017, has a starting price of 99,390 euros. Expensive? Cheap? If we compare it with its two most direct rivals, we have that a BMW M4 costs 94,650 euros and the Mercedes-AMG C 63 Coupé 98,475 euros, so the Audi is the most expensive, although the price difference is not excessive.