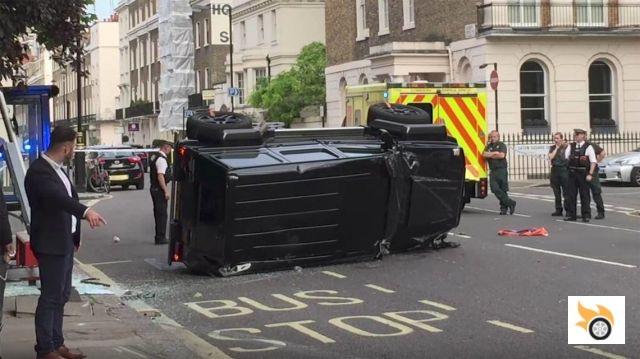 Now let's analyse what happened. The truth is that it matters little or nothing that the Prius has 136 hp combined or that the Brabus G500 4×4² puts out 500 hp; it's as relevant a detail as the color of their bodies. What is relevant is the physics behind this collision.

The Mercedes G-Class is an SUV designed in the 1970s, very good at what it's good at, which is getting into very tricky terrain thanks to its triple differential lock, generous ground clearance, etc. The G500 4×4² is an even more radical preparation, which is also not lame in power: it's close to three tons. It's the wet dream of anyone who wants to take on the rangers off-road. Brabus put some of its own stuff in it, for good measure.

However, that setup - the 4×4² - amplifies one of the G's dynamic shortcomings: it has a very high centre of gravity, so it's more unstable. This isn't just an anti-terrain cliché, it's a reality. The extended ground clearance is what it's all about.

On the other hand we have a normal passenger car, a third generation Toyota Prius, which has the centre of gravity in the right place, because it is designed to drive on the road at the right height. So it's more stable than the G500 no matter how much Brabus preparation it has. The tendency to roll over is much higher in the G.

In fact, everything points to the G500 running a traffic light and both hit: the Prius is hit front side on the left, the G500 on its right side near the front wheel. The low relative height of the car caused a wedge effect that sufficiently altered the G500's centre of gravity to cause it to roll over and drag several metres before coming to a stop. There is a noticeable sagging of the roof, as the bodywork does not support so much weight and the speed was relatively low!

It makes my hair stand on end thinking about a higher ramming speed that would result in a complete rollover of the G, where the A, B, and C pillars can collapse and turn it into a speedster. Ghoulish version: roof completely caved in, passengers dead or with very serious head and spinal injuries. Thank goodness it didn't.

A car has more longitudinal stability than lateral stability, it's elementary because of the dimensions. The G500 4×4² is 4.5 meters long, 2.1 meters wide and 1.78 meters high. The Prius is almost the same length at 4.46 metres, but narrower at 1.75 metres, and shorter at 1.49 metres. In terms of mass, the difference is brutal, the Prius weighs almost half as much. This does matter, and not the hp (but that gives morbid, clicks and visits). As a curiosity, the G consumes three times more fuel than the Prius, and that in homologation...

Therefore, it's more than evident that the G500 has a much poorer lateral stability than the Prius.

Now, what if it had happened the other way around? For starters, a side-on collision of a G into a Prius would be disastrous because the G's bumpers and the hardest points of its structure more or less coincide with the Prius' pillars, which aren't designed to take an onion hit of that caliber. I don't know if the Prius would have rolled over, but the damage would have been enormous.


The structure of the G500 is more rigid in the chassis part and less given to dissipate kinetic energy, it would have been eaten by the car. The Prius has a monocoque frame, which is the norm, and the G-Class is a ladder frame with a bolted body. In terms of collision compatibility it is a very unfavorable case, the occupants of the G suffer a large deceleration and the most severe damage is taken by the vehicle of correct height, size and mass to go through urban areas.


The difference would have been whether it would have hit the driver's side or not, bearing in mind that in the UK the steering wheel is on the right hand side. This example of the G500 has the steering wheel on the left, and given that the roof collapse was on the opposite side, the driver was very lucky. The Prius collided with the left side, the opposite side to the driver, frontolaterally, a case not very favourable to the car.

If it was already ridiculous to move around a city as big as London with such a mammoth, now it is even more so. This type of 4×4 should do its job: go out on the road, not be used as a business representation/posturing vehicle, although it's clear that it attracts more attention than a Prius.

For $22.5 million, this Aston Martin DBR1 becomes the most expensive British car ever auctioned. ❯

97%
Our users have valued with this percentage the resolution of the problems that have been found when consulting this article.