For $22.5 million, this Aston Martin DBR1 becomes the most expensive British car ever auctioned.

This 1956 Aston Martin DBR1 is the equivalent of the Ferrari 250 GTO and Mercedes-Benz 300 SLR, and only five were built between 1956 and 1958. This one you see on the screen is chassis number one, a model built and developed specifically by chief racing designer Ted Cutting.

The Aston Martin DBR1/1 was designed to win at Le Mans but, while it failed to take the chequered flag in 1956 after 246 laps, a later model - DBR1/2 - did so in 1959 with Carroll Shelby and Roy Salvadory at the wheel.

This the first of a series of five race cars, one of which won the 1959 edition of the 24 Hours of Le Mans. This particular car won the 1,000 km Nürburgring race that same year. It was subsequently sold, converted and made road legal in 1962. 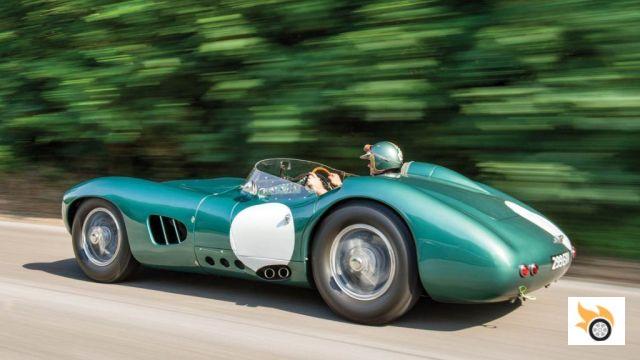 The original DBR1 featured an inline six-cylinder engine that evolved from its 1956 debut. It started with a cubic capacity of 2,493 cubic centimeters and 250 hp while, on its last run in 1959, the engine had a cubic capacity of 2,992 cubic centimeters and produced 271 hp. The original engine is included in the price of the car, but nowadays it has a modern engine developed by R.S. Williams with no historical value, so it can be raced without worry. This new engine boosted the car's power to 301 bhp.

add a comment of For $22.5 million, this Aston Martin DBR1 becomes the most expensive British car ever auctioned.