The manufacturer describes the update as practically complete, "from top to bottom" (sic) although it's not that big a deal. It gets new full LED headlights - a first for Subaru - new rear lights, new rear light clusters, 10-spoke aluminum wheels, rear spoiler and updated bumpers.

The interior features a new 4.2-inch multifunction display that is integrated into the dashboard, as the eighties style of the car was very evident in this area. In addition, a different leather has been used for the steering wheel, to maximize the grip with the hands, while the rim is smaller. In general, more refined materials have been used for the cabin.

Changes to the powertrain, suspension and engine are mentioned to improve the driving experience - without going into detail - although power remains the same. In fact, the BRZ STI Sport Concept was shown at the Tokyo Motor Show and there are no improvements in that sense either. No, they don't intend to make the engine more powerful, it doesn't need it either! Most of those who say that 200 hp is not enough for this car, is that they haven't taken it out of a parking lot.

We finish the section of new features with the "TRACK" driving mode, which affects the electronic aids and the feel of the accelerator pedal, and the HSA system to help the hill start, so that the car does not give an inch while the driver releases the brake, clutch, put in first gear and accelerate. For the Spanish market we will have official information later. 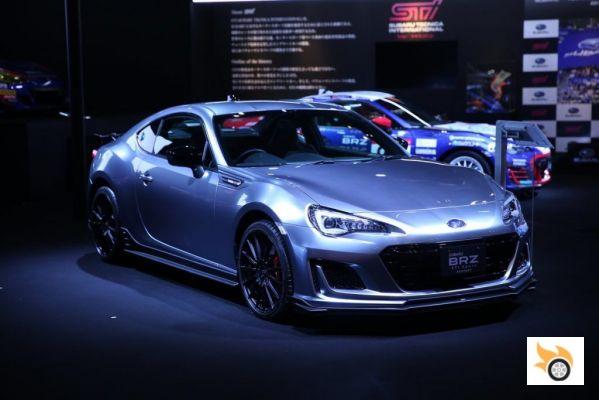 This is the Subaru BRZ STI Sport Concept. Don't think of it in the same sense as comparing an Impreza and an [Impreza] WRX STI. Watch out for the "Sport" surname. Subaru won't be the first or the last brand to look for a middle ground between the "pata negra" and the mainstream model.


It's more appropriate to think of this as BMW's M pack or Audi's S Line. It has performance-focused upgrades, such as a stiffened chassis with a bar linking the suspension turrets in the bay and flexible underbody chassis mounts. The exhaust is less restrictive, although it doesn't change the power data. Instead of 17″ wheels, it has them one inch longer, in matte black on aluminum.

Complete the makeo modifications in the bumpers and side skirts, the spoiler, new optics ... Regarding the interior, the usual in these cases, give better appearance with better quality materials on the steering wheel (which was already leather), upholstery, Alcantara here and there ... What is a more posh BRZ, but with a more interesting behavior ... Will it come to Europe? From the Subaru division in Europe, not a peep, maybe the English will get a few in the boat because of the right-hand drive... and we must not lose sight of the fact that it is a prototype, it will not start selling tomorrow.


This is Mazda's new SUV without camouflage ❯

add a comment of This is the 2017 Subaru BRZ