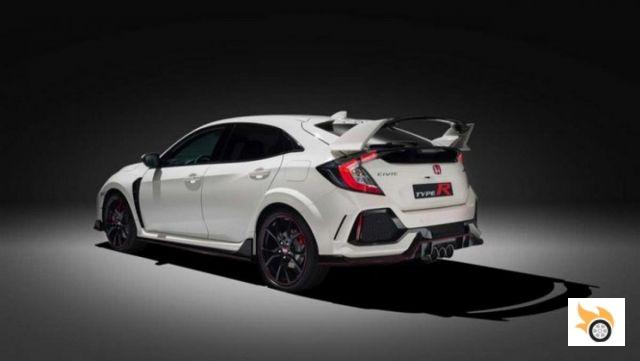 Nowadays, the most sporty front-wheel drive vehicles have elements such as self-locking differentials and complex electronics that allow a considerable increase in their performance. However, brands still have to deal with one of the biggest handicaps of front-wheel drive cars: their ability to transmit power to the ground. It's no use having an engine with hundreds of horsepower if much of that power is lost through the wheels when cornering or starting from a standstill. This last sentence could be summed up in that mythical slogan starring Carl Lewis, "power without control is useless".

Back to the subject at hand, this article is dedicated to the five fastest compact cars in the Green Hell. And which are these five hot hatchbacks? Pole position goes to the new Honda Civic Type R (2017), followed by the Volkswagen Golf GTI Clubsport S (2016), the Honda Civic Type R prototype (2015), Renault Megane R.S. 275 Trophy-R (2014) and Seat Leon Cupra ST 280 (2015).

Honda did it again. In 2015 they already proved that they were capable of making not only the fastest front-wheel drive at the Nürburgring, but also one of the most fun and engaging with the driver. A title that was taken away from them by the Golf GTI Clubsport S last year but which they have regained without much trouble.To set the time, Honda resorted to a unit in its last stage of development, complete with safety cage. To compensate for the extra weight of the cage, the Japanese removed the multimedia system and rear seats. Honda claims it didn't help improve the time. Another thing is the issue of tires, which were not specified. The standard Continental ContiSportContact 6 tires are sporty but not as radical as the Michelin Pilot Sport Cup.


It is noteworthy that it is 23 seconds faster than the Ford Focus RS, a compact with all-wheel drive and 350 hp from a 2.3 EcoBoost engine (and also 158 kg heavier). Recall that the Type R has the same two-litre V-TEC turbocharged engine as its predecessor but tuned to 320bhp.

The quintessential 'compact sports car' set the record on the German track last year beating the previous record by three seconds. Like the Type R, the GTI Clubsport S also lacked rear seats (and no centre armrest) but did have a roll cage. However, unlike Honda, the Wolfsburg-based company did sell this car without the rear seats and with the same tyres that set the record, Michelin Sport Cup 235/35. These are tyres specifically designed for track use (semi-slick), and if possible in the dry. With 310 hp under your right foot it's not difficult to lose control.

The bad thing about it? That only 400 units have been produced. Yes, it was once the fastest FWD at the Nürburgring, but with a production run of so few units you won't find many, unlike its Japanese rival whose production is only limited by the years of manufacture.

Curious, isn't it? Two Civics in the top five fastest front-wheel drive cars. If there's one thing the Type R has been known for over the years, it's its ability to efficiently transmit power to the front axle, as well as generate great driver-car involvement and enjoy the V-TEC 'kick' at over 7,000 revs. We all held our hands over our heads when we heard that the famous fast-revving naturally aspirated engines were going to be replaced by a turbocharged engine. Fortunately, even though downsizing is on the rise and naturally aspirated engines are on their last legs, Honda hasn't left tradition behind and its turbocharged V-TEC engine offers a very linear response with the ability to be stretched to almost 8,000 rpm.


Like its successor, the Nürburgring record was set with a unit in its final stages of development. Equipment items such as the passenger seat, climate control and audio system were removed. All of this was to compensate for the weight of the safety cage which, according to Honda "was installed expressly for safety reasons and not to provide increased rigidity". This time was achieved in May 2014, with technical specifications very close to those of the production model. It had in fact a standard engine tune, leaving us with the 2.0 V-TEC Turbo block developing 310 horsepower, with its transmission, suspension, exhaust system, brakes and aerodynamics being the same as the Civic Type R that came out and recently 'blew up'. The tires used for the record were not specified, only said to be the same 235/35 that would take the production model.

Probably the most radical of the whole list. Its chassis has been praised by all, one of the best we can find within the compact sports segment, with 100 kilos less weight compared to the normal version. It has a roll cage in the rear (obviously without seats), a lithium-ion battery 16 kilos lighter than lead, a titanium Akrapovic exhaust system and Recaro Pole Position monocoque polycarbonate seats. The tuning was also revised, with 275 hp extracted from the two-litre petrol engine, adjustable Öhlins Road & Track dampers, Michelin Pilot Sport Cup semi-slick tyres and a high-performance braking system comprising 350-millimetre diameter steel and aluminium discs adapted for intensive track use.

Like the Golf GTI Clubsport S, the Megane R.S. 275 Trophy-R is a very exclusive car, only 250 units were produced at a price of 45,000 euros per unit. Seeing the bubble that is generated around the automotive world, it will be a car for which not long from now will be paid more. In fact, there are already some units for sale for which they ask more than 50,000 euros ...


His replacement could have all the ingredients to break a new record, although unfortunately, will not be in this classification; Renault has already confirmed that it will be four-wheel drive front-wheel drive with four-wheel steering.

The Leon Cupra ST's record is a curious one. It's the fastest front-wheel drive estate on the Green Hell, beating even its five-door variant and the previous fastest estate to lap that circuit by 11 seconds, the RS4 Avant.

The record was set by driver Jordi Gené with a unit equipped with a manual gearbox and the Performance Pack. With this pack, the Seat Leon Cupra not only improves its exterior appearance, but also receives important modifications that further improve its performance on the track. Specifically, the pack includes high-performance sports brakes with Brembo calipers, 19″ multi-spoke alloy wheels 2.1 kg lighter in black or orange shod with Michelin Sport Cup 2 235/35 R19 tires and side skirts in the body color.