This is the Rolls-Royce Sweptail, the yacht that dreamed of rolling down the road

The steering wheel on the right hand side limits the nationality of the owner to the United Kingdom, some Commonwealth countries or former British colonies, Japan...

If we look at its design, the grille is the largest installed on any modern Rolls-Royce. It is made from a single piece of aluminium, before being hand polished to a mirror shine. Most notable, however, is the rear, where the swept tail that gives the car its name (swept - swept, tail - tail) is located. Rolls says that the way the bodywork wraps under the car with no visible limit to the surfaces is similar to the hull of a yacht. Meanwhile, the bullet-tipped central brake light and lower bumper combine to create a greater sense of elegance in motion, as the manufacturer makes clear.

The highlight of the exterior, however, Rolls says, is the panoramic glass roof. They claim it is one of the most complex ever seen on a car. It's certainly one of the largest. Certainly, the two occupants enjoying the interior will not complain about the lack of light. 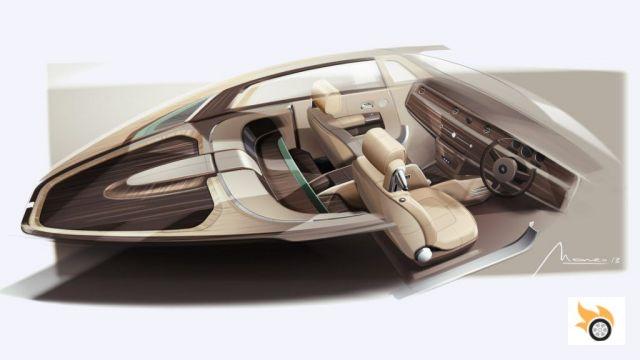 Inside, its opulent character is predictable, with lots of wood, leather, metal, ebony and other high quality materials and craftsmanship. Two suitcases, one on each side, conceal custom briefcases. The centre console also houses a mechanism that pours a bottle of the owner's favourite champagne (and rotates it to the perfect angle for collecting) and two crystal glasses.

Rolls hasn't given us any technical details, but the Sweptail will likely feature the 460bhp 6.75 V12 under the hood.

The firm's CEO, Torsten Müller-Ötvös, said the car would be "the most substantially expensive, probably the most expensive car in years... or maybe ever built". Rumors point to a price tag of over 10 million euros... I'm going to see if I have the cash in my pocket to order one.

add a comment of This is the Rolls-Royce Sweptail, the yacht that dreamed of rolling down the road