The look is raw, but discreet, very much in the style of the M5 E39. Its differentiating elements are noticeable in its large wheels, its large air intakes at the front, the rear diffuser, its widened tracks or in the four exhaust outlets.

Let's move on to the data. In cold, hard statistics. The BMW M5 (F90) has the same 4.4-liter TwinPower Turbo V8 as the outgoing model (F10), but it's been thoroughly revised. It features two new turbochargers, higher injection pressure and improvements to the exhaust, lubrication and cooling systems, delivering 600 horsepower between 5,700 and 6,600 rpm, putting it on par with the not-so-ancient Mercedes-AMG E63 S. Impressive too is the 750 Nm of torque (70 more) that is maintained on a curve between 1,800 and 5,700 rpm. 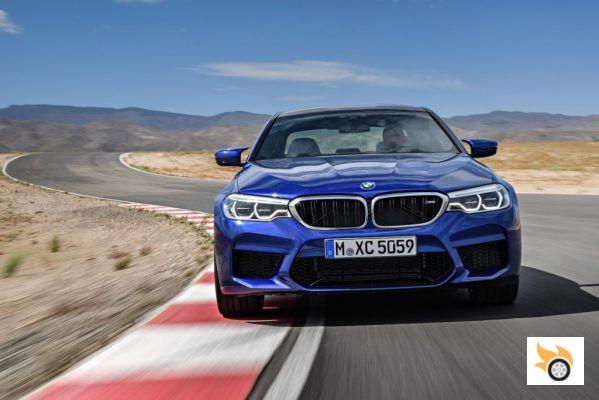 All that torrent of power is digested by the M Steptronic gearbox, an eight-speed torque converter automatic transmission that has its own oil cooler to keep the temperature at bay even on the racetrack. Drivers can choose between three modes of operation: a "tranquis" mode, a "fire" mode and a sequential mode, either via the steering wheel paddles or from the gear lever. Note that, in sequential mode, the transmission will not shift to the next gear even if we are in the injection cut.

From the infotainment system we can choose three driving modes: 4WD, 4WD Sport and 2WD. BMW has not wanted to lose the pure essence of its propulsion sedan.

As we already knew, the new M5 has an all-wheel drive system. This system, called M xDrive, is designed to generally send more power to the rear wheels - which are separated by an active limited slip differential. In 4WD Sport mode, the rear axle is prioritized even more, allowing for a more playful rear end until the electronic controls act on the car. In case you really want to go drifter, there's always the 2WD (propulsion) mode that will allow the M5 to steam your tires in a matter of minutes. 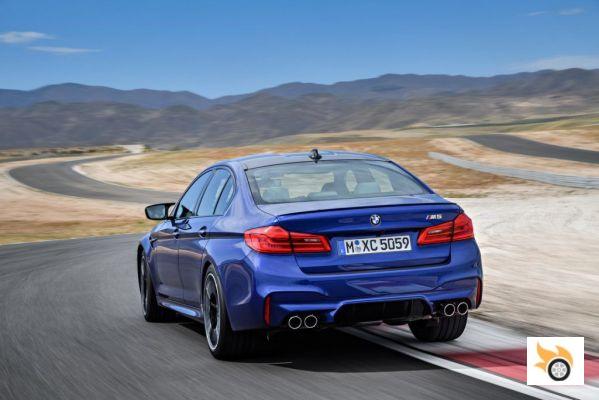 On paper we have a 0-60 mph sprint in 3.4 seconds and 0-200 mph in 11.1 seconds. Top speed will be limited to 250 km/h although, if you opt for the optional M Driver's Package it can be increased to 305 km/h. These are very serious numbers for a saloon in this segment, which has an average fuel consumption of -only- 10.5 litres per hundred kilometres.

When it's time to stop, the standard 395 mm discs with six-piston calipers up front and 378 mm discs with single-piston floating calipers on the rear axle should be powerful enough to handle the task with ease. But if you see that the nearly two-tonne weight needs better brakes to stop, BMW also offers carbon-ceramic brakes.

The new M5 has been trained on circuits like Mirama in the south of France or the famous Nürburgring Nordschleife. BMW promises the "agile and precise handling you expect from an M5".

On the outside, the latest addition to the M family gains some weight-reducing add-ons. BMW has put its weight, according to European homologation, at 1,855 kilograms without driver. To achieve this, there are numerous aluminum components and body elements assembled in carbon fiber, such as the roof itself. BMW also details that it has created a significantly lighter exhaust system, but also optimized to offer a more forceful and evocative sound that will feature a system of valves and resonators. Among the options available include variable hardness dampers - with Comfort, Sport and Sport Plus modes - or the M Servotronic electromechanical steering, also with three modes of hardness. 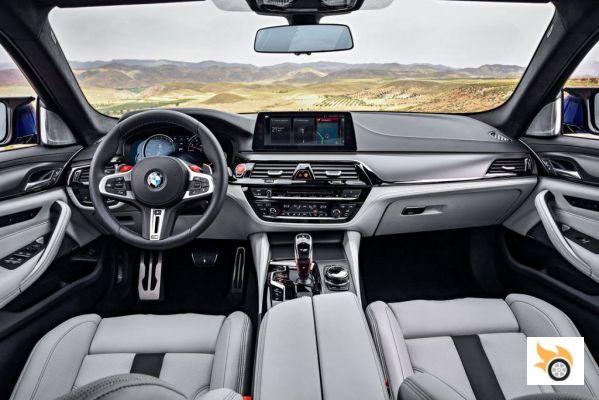 Inside, the new M5 offers all the usual niceties and high-tech options found in a well-equipped BMW 5 Series. But the M5 also gets some upgrades in keeping with its mission, including M Sport seats with standard, electrically adjustable Merino leather upholstery (multifunction ones with more settings and backlit M logo are optional). Other M interior details include a specifically designed digital instrument cluster, multifunction steering wheel, red accents and gear knob.