The new SUV of the Czech brand shares a platform with the Volkswagen Tiguan and Seat Ateca, however, the Kodiaq has a larger size, as it reaches 4.7 m and can have seven seats. It has a wide range of variants, to which two new ones are now added. They will be unveiled at the Geneva International Motor Show, which will be held from March 7 to 19, 2017.

The Scout version is the most camper variant of this SUV that, like most of its rivals, will circulate 90% of the time on asphalt. What this version brings to the table is a more country approach and a more robust appearance than the rest of the range as well as small improvements to increase efficiency in difficult terrain, as happens to other models that carry the Scout surname, such as the Octavia Combi Scout. 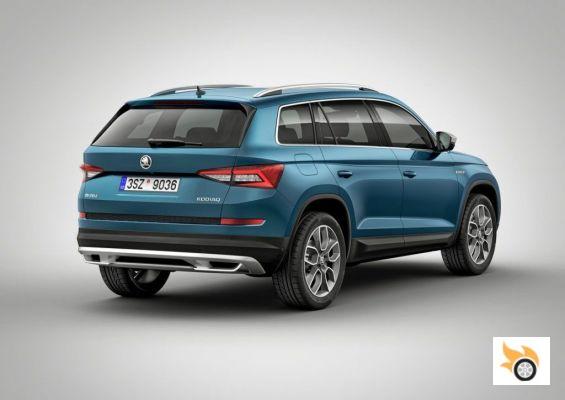 All versions of this Scout finish equip the all-wheel drive system with Haldex multi-plate clutch as standard, which prioritizes traction to the front axle and sends torque to the rear axle when the system detects traction loss. This system is the same as Volkswagen's 4Motion.

The Scout version comes standard with 19-inch wheels with a specific design and tinted rear windows, as well as aluminum-colored details throughout the body, such as the radiator grille, roof bars, mirror housings and window frames and an underbody protector on the front bumper. We can see the logo of this version in the front wings and in the glove compartment.

In addition to the design, the Scout version has specific equipment elements. It is based on the Ambition version, over which some elements are added, such as the Off-Road Assist, a package that includes an underbody protector, as well as the front and rear parking assistant. Also included in the standard equipment is the Driving Mode Select mode selector with six operating modes (Eco, Comfort, Normal, Sport, Individual and Snow), which acts on the engine, automatic gearbox, steering and air conditioning.


In the standard equipment we can also find the LED ambient light adjustable in 10 colors, the Modular Infotainment Matrix (MIB) infotaiment system with eight speakers, seats and door trim upholstered in Alcantara with the Kodiaq logo or aluminum pedals. 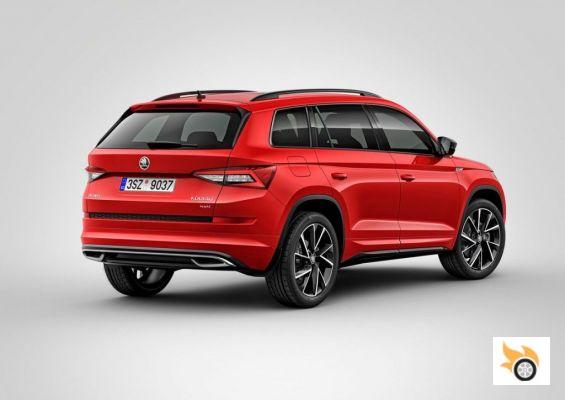 Corresponds to the version with the sportiest image of the Kodiaq range, its equipment is equivalent to the Scout version, but with a different approach, mechanically are indistinguishable. Like this, it is placed above the Ambition finish. While the focus of this vehicle is not at all sporty, there may be customers who do appreciate this less conventional design.

In this version highlights the decorative elements in black to highlight the sporty image: the radiator grille, roof rails, exterior mirror housings and window frames acquire this color. The rear windows are tinted and at the rear we find a silver trim. As standard it is fitted with 19-inch alloy wheels, although 20″ wheels are available as an option. In the front wings we can find the badge that indicates this Sportline version.

On the Ambition finish, it is equipped with sports seats (the driver's seat is electronically adjustable and includes memory function) with Alcantara covers and silver stitching. The steering wheel and gear lever are leather-wrapped and the pedals are aluminium. The display includes new functions such as G-forces, turbo pressure, instantaneous engine power and oil and coolant temperature.


The rest of the equipment is the same as in the Scout version with the exception of the upholstery, which has a specific design in this version. 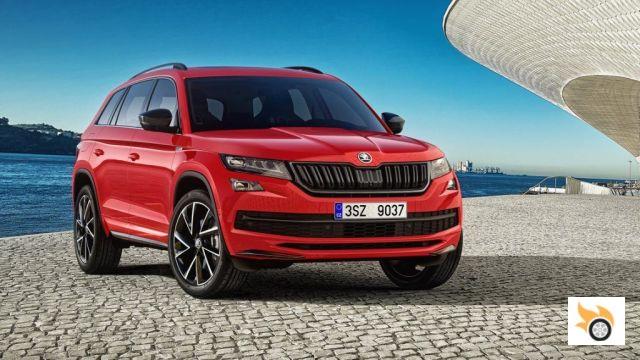 For both the Skoda Kodiaq Sportline and Scout there are two petrol and two diesel engines available:

Skoda has not yet confirmed the price list for these two new equipment variants.

add a comment from Skoda Kodiaq Scout and Sportline, new for Geneva