The Z coupe, has always been a special car for Nissan, and it is the model that with the Nissan became in the 70s in an important brand in the U.S. market. More than forty years after its launch and with the rebound of notoriety that gives Nismo to the current 370Z, we thought it was the right time to remember the 240Z, the model that started it all. 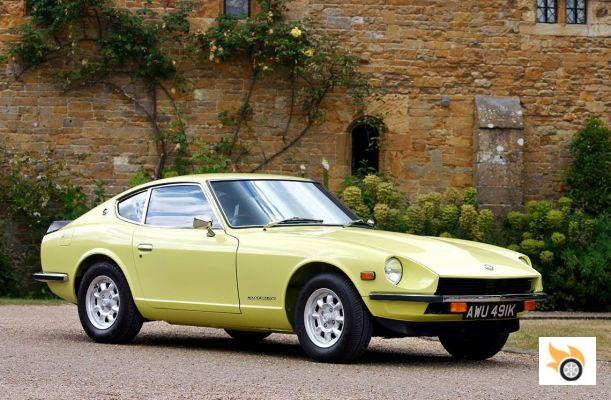 When Nissan, through its export brand Datsun, decided to enter the U.S. market, it did so by drawing inspiration from the best of European production, but at the same time without renouncing its Japanese origins. Character, attractive design and, above all, an unprecedented price/performance/driving pleasure ratio in the United States made the Datsun 240Z an icon of motoring.

It was under the impetus of Yutaka Katayama, president of Nissan USA in the 1960s, that the creation of this sports car was pushed forward. A market study conducted in the United States by Nissan revealed the presence of an untapped niche market for affordable sports cars. Even so, the niche market in question represented 24,000 units per year. And in the 1960s, that was a large enough volume not to be missed. British roadsters were in full decline (outdated, modest performance) and the rest of the sports cars, all European, weren't exactly cheap. Of course, there was the Corvette, but its market was that of European sports cars, i.e. luxury. Nissan had a free hand and could occupy the market almost without competition. The operation for Nissan was not only to gain an entire market segment, it was also, one might even say above all, to improve its image as a manufacturer of cheap models, what today we would call low-cost. 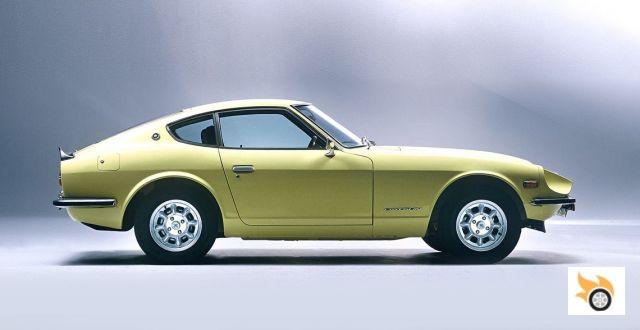 Datsun entered the US market in 1958. That year it sold a whopping 58 Bluebirds. In a market of nearly 4.5 million cars, those sales are anecdotal, a footnote. Fortunately, sales would gradually improve, but without great results. In 1960, a small roadster arrives, the Fairlady, equipped with a 1,200cc. Its small engine and baroque design did not correspond to the tastes of the American market. In 1962, a new Fairlady entered the market. Its design, inspired by British creations such as MG and Triumph, was well received, but its performance was too modest to make a real mark on the market. In 1968, the Fairlady receives a 2.0-litre engine that allows it to reach 200 km/h (124 mph). The model began to gain popularity in American club racing and even took part in the Monte Carlo rally.

For Nissan's top management, that's not enough. It is necessary to mark the minds, to make the brand known with a product that surprises, that attracts attention in a positive way. It's no longer about competing with British roadsters, which have gone out of fashion, but about attacking the European nobility directly. The new model is to be a rival to the Porsche 911 and Jaguar E-Type. It is an ambitious project for a Japanese manufacturer unknown at the time. 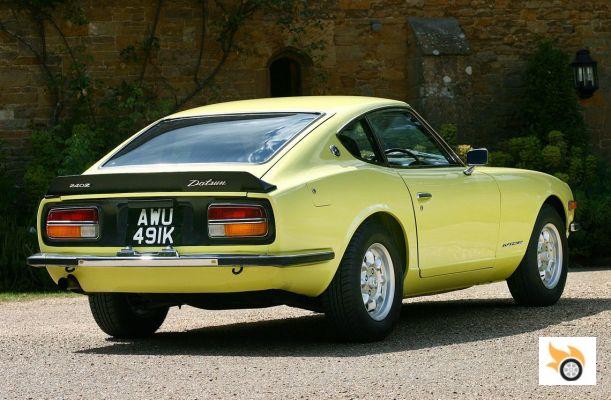 The proportions and lines are powerfully reminiscent of European productions of the time.

Stylist Yoshihiko Matsuo, head of the design department, leads the creation of the bodywork. The original design was for some time attributed to the German Albrecht Graf Goertz, author of the Toyota 2000GT, but Nissan categorically denied it, recalling that it was an in-house design. Jonathan Mantle, in his book "Car Wars" explains that Goertz -as well as in other occasions Pininfarina- had the contractual obligation to keep secret their participation in the design of the Japanese models. However, it is true that Goertz previously worked on a joint project between Nissan and Yamaha called 2000 GT (nothing to do with the eponymous Toyota). Nissan would build the chassis and bodywork, while Yamaha would be in charge of the 2.0-litre twin-shaft engine. In the end, the two brands failed to reach an agreement after the construction of two prototypes and the project was abandoned. We'll never know if part of that project was reused in the 240Z. One day, perhaps, the truth will be known. For now, officially, Yoshihiko Matsuo is the author of the design. In addition to being Nissan's chief designer, he was also the development director of the Z project. The European influences on the design are evident. In fact, the brand itself acknowledged having taken as references to the Jaguar E-Type, Porsche 911 and the work of the great Italian coachbuilders, such as Pininfarina. Its proportions are classic for a two-seater coupe (the 2+2 would not arrive until 1974 accompanied by a fatter engine). The long bonnet has a hump, like the E-Type or Chevrolet Camaro, while the passenger compartment is almost over the rear axle. The roofline, dynamized by the rear wheel arches and the truncated rear end give it a certain muscularity. The black spoiler and rear end, as well as the numerous chrome elements (mirrors, window frames, etc.) are characteristic of the late 60s. 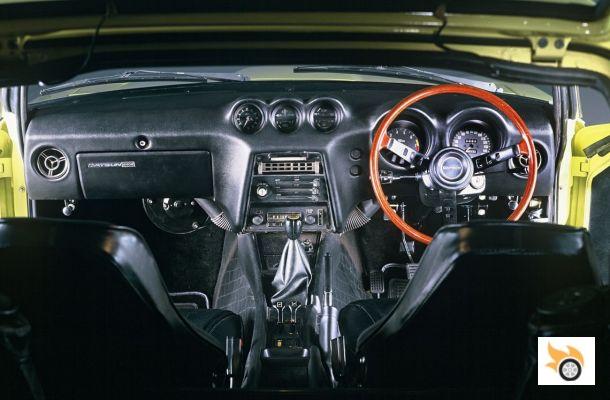 Black plastic everywhere, the norm in Japanese models of the early 70s.

In the cabin it is impossible to escape the Japanese standards of the time: everything is plastic and black. Of course, over time, the upholstery could be chosen in another colour, such as red, but it was still made of plastic (skai) despite its false piping, moulded directly into the cover. At least its design was in keeping with the style canons of the time. Two large dials behind the steering wheel and three additional gauges above the centre console. The three-arm steering wheel has an excessively thin rim, even for the era, and the gear knob is at the perfect height for quick operation, as it is close to the steering wheel.

As for the mechanics, Nissan used the organs available in the rest of the range to limit development costs, on the one hand, and propose a car affordable maintenance, on the other. The engine is an inline 6-cylinder, derived from the Cedric and Gloria saloons, front-mounted in a self-supporting monocoque structure with four-wheel independent suspension. 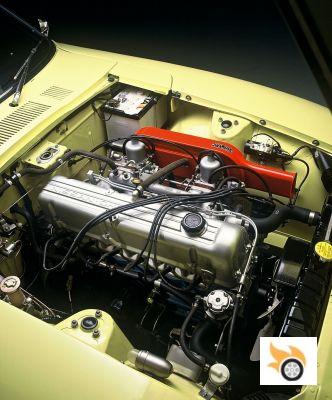 The 2.4-litre inline 6-cylinder was also fitted to the Nissan Cedric and Gloria.

The 240 Z is finally introduced at the 1969 Tokyo Motor Show under the Fairlady Z name. For tax reasons, in the domestic market, it has a 2.0 liter, but exports have a 2.4 liter engine. This 2,393 cc, single overhead camshaft inline 6-cylinder has its origins in the 4-cylinder of the 1967 Nissan Bluebird 510. Powered by twin SU carburettors, it develops 151 SAE bhp, which roughly translates to around 135 DIN bhp. It delivers 20.1 mkg at 4400 rpm. The performance, without being diabolical, was similar to that of a Porsche 911 T: 200 km/h top speed and around 30 seconds in the 0-1000m. Tests of the time evoke a fun car, with an ordinary sound, but with a willing engine above 3,000 rpm and pushing relentlessly up to 6,000 revs. For the time, the dynamic behaviour was praised for its agility, 2.30 m wheelbase and four-wheel independent suspension. The front triangles were said to have come from the Laurel 1800 saloon, while the rear ones had been blatantly and simply copied from those of the 1963 Lotus Elan. The result was a balanced, noble and agile car. Just right for the American market. 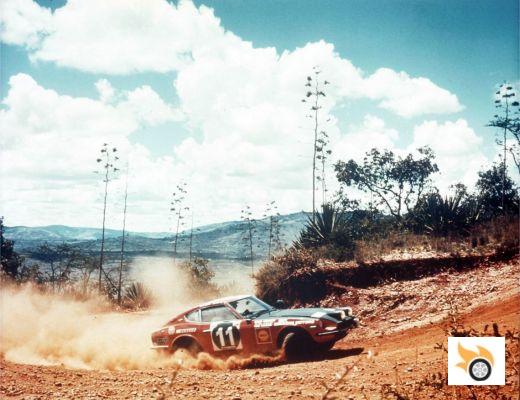 Initially, the Z cost $3,500. For the time, this was a very attractive price for anyone looking for a nice sports car with good performance. A Porsche 911 T was $7,000 and a Jaguar E-Type was $6,000 - better than the sales. But to win with more than just a competitive price, it had to face the relentless judge that is the competition.

In Europe, the 240Z was also successful in competition. It finished 5th in the 1971 Monte-Carlo and 3rd in the 1972 Monte-Carlo, but its greatest success came in the very tough East African Safari Rally, a precursor to the Dakar, winning the 1971 and 1973 editions.

Finally, the commercial success is much more overwhelming. With its first competition victories, the success of the Datsun 240Z is phenomenal. In 1970, a 1969 240Z was more expensive than the new model, Nissan couldn't afford it. The factory in Hiratsuka (Japan) had to increase its production, initially planned at 2,000 cars per month, to 11,000 units per month. Over the first four years of its commercial life, more than 250,000 units were sold, and almost 200,000 in the United States alone. Not bad for a brand that started very quietly and for a model that was expected to sell just 24,000 units per year. 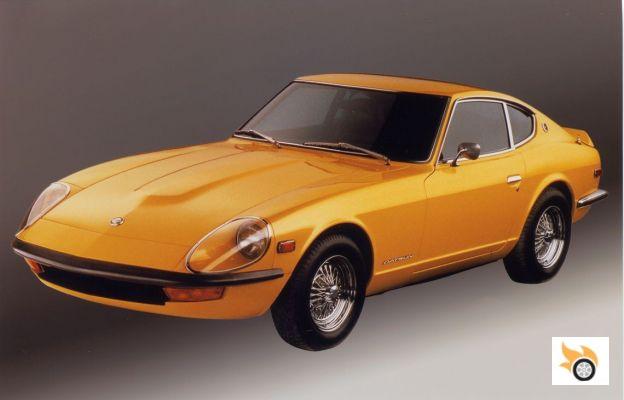 Today, the 240Z has achieved iconic status. So much so that in 1997, authentic, fully restored, like-new 240Zs began to be sold at some Nissan dealerships. The idea was born in 1996 when Nissan executives realized they wouldn't have a sports car in their lineup for at least three years. So they approached the workshop of Pierre Perot in Hawthorne, California, who specialized in Zs and whose restorations were considered the best. Vintage 1997 240Zs sold for $25,000 with a one-year or 120,000-mile warranty. It's that iconic status that has allowed Nissan to relaunch its Z coupe lineup, first with the 300ZX, and then with the 350Z and 370Z clearly inspired by the formula for the original Z's success. 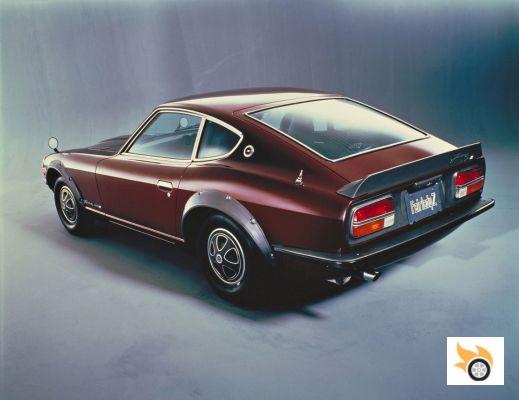