Nissan e-power hybrids are a good alternative to diesels 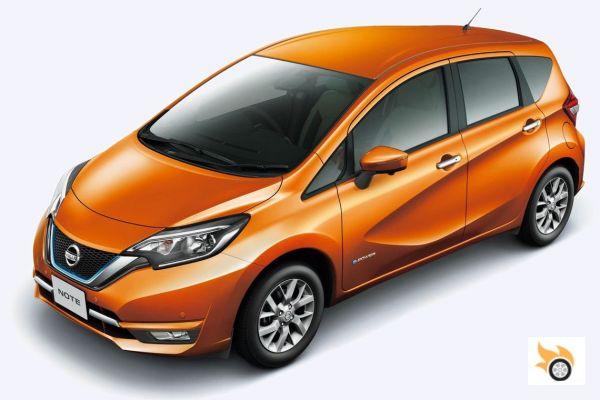 Nowadays, when we talk about hybrids, it is easy to think of parallel or combined hybrids, in which the internal combustion engine does transmit mechanical power to the wheels (always or part-time). However, there is a variant in which the petrol engine is not connected to the transmission, i.e. a series hybrid. The drive is always electric, the petrol engine is used as an electricity generator. No gearbox or clutch is required.

In a parallel system both engines push at the same time or are connected to the transmission at the same time. In a combined system, it can work both in series and in parallel. Toyota's system works like this, the electric motor can push on its own with the combustion engine disconnected altogether, work with the gasoline engine, or the gasoline engine can be used only as a generator.

In the Nissan Note e-Power has a very small battery, 1.5 kWh, similar in capacity to that of a hybrid to use as the Prius, Auris or Yaris. This is 20 times less than an average electric car, such as the Leaf. It is not necessary a large storage capacity, in fact that energy is usually enough for two to three kilometers on the flat. A series hybrid is not plug-in by definition, in fact, it doesn't have a plug. If it were plug-in it would need larger batteries, and that is more price, more weight and more volume occupied.

As we can see in the video, it's a very simple system. As long as power is needed, the petrol engine works, but in working conditions in which it is more efficient, so consumption is reduced. If that power is no longer needed, it stops completely and the Note e-Power works temporarily as an electric car, without emissions. In Japan, this system produces just 55 hp, but it's more than enough to get around Japanese cities.


The concept is likely to be exported to other markets, such as Europe, where the pressure against diesel engines is increasing due to the future Euro 6c regulation, which limits the pollution that can be tolerated outside a homologation laboratory, that is, on real roads with realistic conditions. The technology already exists and it is not a headache to implement it in large series models like the Note, although it is not exactly a bestseller on this continent.

The e-Power system is not to be confused with Renault's 48-volt semi-hybrid system for the new Scénic and other platform derivatives.

A pure electric car has range limitations, but the Note e-Power does not. For Europe, the power delivery will have to be fine-tuned a bit to better suit the driving style that we spend here, where most roads aren't limited to 80 km/h. On the other hand, it's a cheaper technology than Toyota's, which may give Nissan a competitive advantage. The big rival has shown that hybrids can be successfully mass-marketed by hitting the right keys. On the other hand Suzuki has shown with the SHVS system that a light and cheap technology can be competitive with the hegemonic manufacturer in this respect.

It's more worthwhile for Nissan to invest in adding this option to its compacts and subcompacts than in perfecting the anti-pollution systems of the dCi engines. Moreover, we know that these segments will be the first where diesel engines will disappear because customers are not willing to pay a higher price premium just to pollute less.

Nissan's hybrid system has a very low fuel consumption, but the Japanese homologation (JC08) is less relevant for Europeans than NEDC (which is saying something) because it gives ridiculously low values. In any case, as hybrids, Nissan e-Powers have several advantages that should not be underestimated, such as access to low-emission zones, lower taxes, easier maintenance, less wear components, etc..


Yes, Nissan has to be encouraged to bring this technology to our market. According to Daniele Schillaci, Nissan's global vice president of marketing and sales, the possibility is under study. Given that this gentleman has already worked for Toyota and knows the whole hybrid racket very well, the prospects of these cars coming to Europe are very encouraging.