Mercedes-Benz completes the E-Class with the Convertible

Like its predecessor, it will be equipped with a soft top and will be based on the coupé model, adapting its features to those of a convertible model. In terms of equipment, the Coupé and Convertible will be closely matched. Both come with LED High Performance headlamps as standard - MULTIBEAM LED headlamps are available as an option. For the first time in this model, we will be able to equip our E-Class Convertible and Coupé with the 4MATIC all-wheel drive system. Another new feature is the illumination of the tail lights when the car is opened, which emit a sequence of lights as a greeting to greet or bid farewell to the owner.

Both Coupé and Convertible models have a chassis lowered by 15 mm compared to the saloon and Estate. The soft top is available in dark brown, dark blue, dark red or black and its elements are very similar to those of the S-Class Cabrio. The opening and closing operation is completed in 20 seconds and can be performed while driving at speeds of up to 50 km/h (31 mph).

In combination with the fully electric control unit, which is part of the optional cabrio comfort package, the driver does not have to stop the vehicle to manually operate the boot partition, which has a capacity of 385 litres, or 310 litres with the soft top open. With the top open, the boot capacity is somewhat larger than that of some cars, such as a Volkswagen Polo, while with the top closed it could be compared to that of a Golf, although this E-Class Cabrio will have more irregular shapes and loading it will be a somewhat more complicated task.

But let's stop talking about the trunk, the one who buys this car does not do it for this aspect, but because he appreciates luxury and driving with the sky for a roof, and in this aspect the E-Class Cabrio offers numerous amenities for us to enjoy the car with the top folded. The sport seats with all-round aesthetics have pronounced sides, integrated headrests and, optionally, integrated heating in the headrest AIRSCARF.


The standard equipment includes automatic seatbelt adjusters in the front seats. The rear seats now offer standard access to the passenger compartment from the luggage compartment and are optionally available with seat heating. The interior lighting is LED and the ambient lighting can be adjusted in 64 shades. It is also equipped with the AIRCAP automatic windshield system. 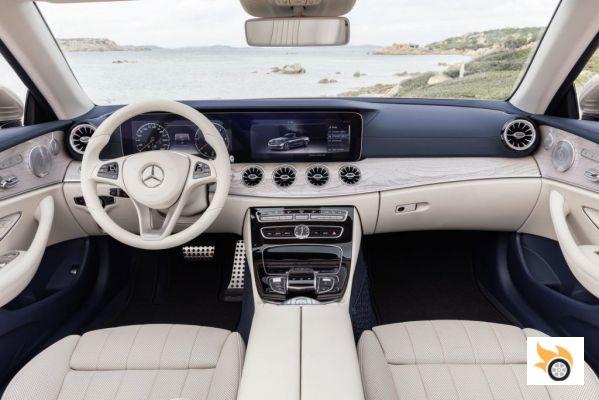 The chassis has been reinforced specifically for the Cabrio model, resulting in greater torsional rigidity. The intelligent lightweight construction of the coupé has been retained, with an aluminium hybrid body. Most of the body shell components are made of die-cast aluminium and sheet steel. The front fender, hood and trunk lid are made of sheet aluminum.

In terms of safety systems, it is at the same level as the rest of the range, incorporating in the case of the cabrio version elements such as rollover protection, consisting of two cassettes mounted behind the rear seats without detracting from the design of the vehicle. If an imminent danger of rollover is recognized, these elements are extended by pyrotechnical means.

An optional system that attracts a lot of attention is MAGIC VISION CONTROL, an intelligent and highly efficient windscreen wiper and washer system. It has a wiper arm with water ejectors on both sides that spray the washer fluid directly in front of the wiper blade in every wiping direction. This means that there is no water jet during the washing process to restrict the driver's visibility, while at the same time ensuring maximum wiping efficiency. 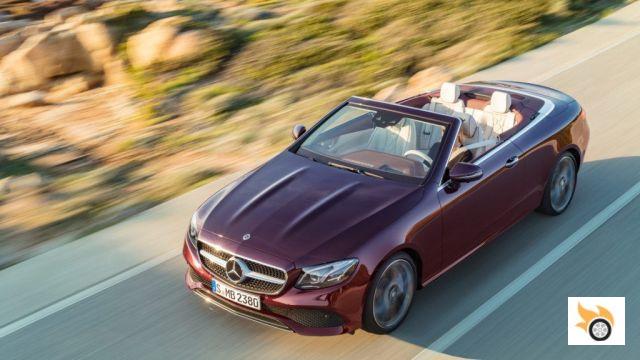 In addition, the electronics include a specific function for cabriolets that reduces the amount of water when driving with the soft top open and activates the washing mainly in the downward sweeping movement. This means that the windscreen can be conveniently cleaned at any speed, without water penetrating into the interior when driving with the soft top open. The entire system, including the wiper blade, is heated at low temperatures, which prevents snow or ice from sticking to the windscreen in winter.


The air conditioning system has been specially developed for convertible models and reacts differently depending on the position of the soft top. In contrast to conventional systems, the air conditioning control is fully automatic, with no need for the driver to select a specific mode if the soft top is folded down or up, or to memorize temperature settings for each of these options.

An additional function ensures maximum climate comfort in the cabrio when opening and closing the soft top, which is particularly complex from an air-conditioning technology perspective. 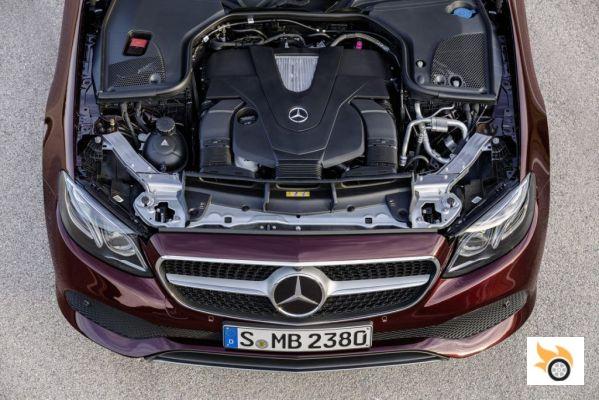 The rest of the elements is almost identical to that of its range brothers, especially the Coupé model, with which it will share the range of engines in which the new four-cylinder diesel 220d with 194 hp stands out as a novelty.