If you like the Kuro, based on the imminent retractable hardtop version, maybe you'll see your wishes come true and you'll be able to buy an MX-5 with that semi-matte metallic paint. Personally I'd advise against it, as it's almost impossible to keep that kind of paint flawless, but if you dream of the Speedster Evolution, you'd better wake up, because it's not the first MX-5 prototype without a windshield -or with a lowered windshield- and none of the previous ones have gone to series production.

But despite how far it is from making it to series, the radical MX-5 Miata Speedster Evolution is the more interesting of the two. The concept-tuning is actually an evolution of the previous MX-5 Speedster introduced last year, which managed to lower the 1,050 kg of the new standard MX-5 to 943 kg. 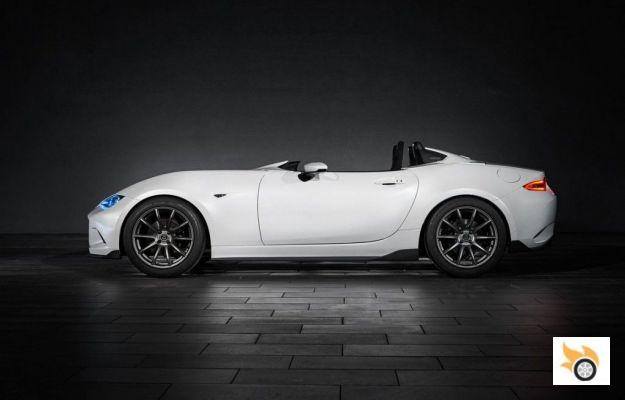 With respect to the previous Speedster, the new Speedster Evolution replaces the original clocks with a screen, eliminates the lower part of the dashboard, changes the original 11.4 kg lead battery for a lithium one of only 2 kg, abandons the Brembo brakes of the previous Speedster - returning to those of the MX-5 2.0 street - and mounts carbon body components. In addition, it mounts the MX-5 Global Cup racing suspensions, its 17×8.5" wheels with 225/45R17 tires, and all this to leave the final weight at a rachitic 898 kg -including fuel and driver- making it the lightest car at SEMA 2016.

So what does the Roadster Evolution have to offer?

Keep in mind that while the rest of the brands present at SEMA emphasize customization and increased power, the Roadster Evolution focuses almost exclusively on weight reduction of an already lightweight model, a car that shaved 105 kg (9%) off the weight of the previous generation.


Also, it is worth remembering that Nobuhiro Yamamoto (head of the MX-5 project) explained that the 2.0 engine of the current MX-5 was added because they thought that the American market would not accept an engine as "small" as the 1.5, but according to him, the real MX-5 ND is the 1.5, and so much so, that in Japan only the MX-5 is marketed with the smaller engine. On the other hand, the same Nobuhiro Yamamoto recently stated that Mazda is working with different ideas and materials - such as carbon fiber - to make the next generation MX-5 even lighter, and thus can equip smaller engines... 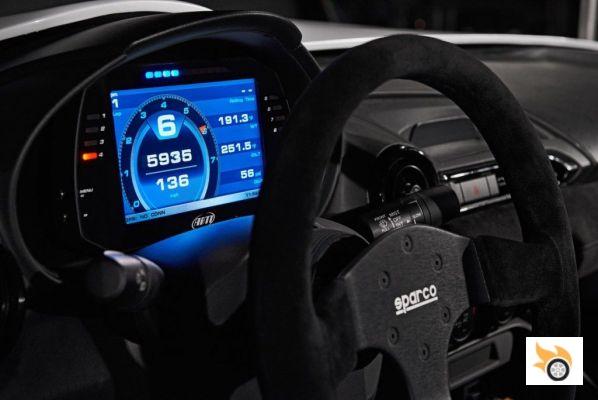 Well, although the Japanese roadster is the best-selling of all time, we have to keep in mind that its sales (and therefore profits) are actually testimonial, which in practice means that it will always be difficult to justify investments in new generations. On the other hand, we will have to see if in five or ten years there will still be a market for this type of car (I hope so), and also, how the possible and gradual replacement of "pure" internal combustion engines with hybrid and electric technology evolves...

As far as engines are concerned, and although Mazda's current Skyactiv-G petrol engines are -in real driving- very frugal in consumption, Mazda says it is still working on a new and more efficient generation of its petrol engines, with ideas such as auto-ignition. But keep in mind that some cities are already announcing that in the future they could ban "polluting" cars, which would force -de facto- the hybridization or electrification of all new cars...


That's why I imagine that Mazda is not sure if the day the next MX-5 appears the legislation will still allow "pure" thermal engine cars, and that should partly explain their obsession with lowering the weight of the future MX-5, either to homologate lower figures -with smaller engines of 1.3 or 1.5 liters- or to compensate for the increased weight of the batteries of the MX-5 of the future. 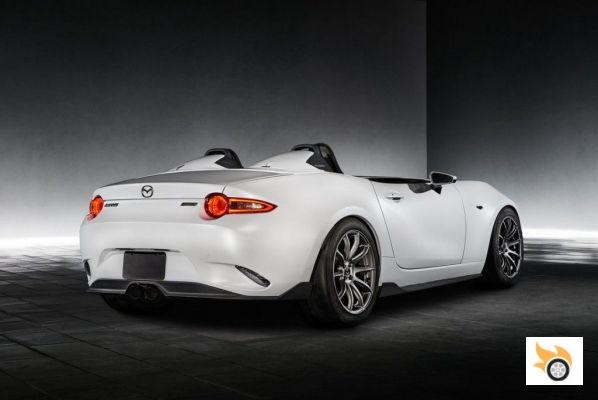 If the MX-5 survives, it will be hybrid first, then electric.

But maybe I'm wrong, and in reality the next MX-5 will still be a hybrid-less, internal combustion engine; it'll probably be the last one. In that case, I bet it would stop well under 1,000 kg, and match the 1.3 or 1.5 naturally aspirated engines... In any case, it probably won't be faster than the current one, but I hope it will be just as much fun, and even more eco-friendly.

The Kuro on the other hand is much more conservative in terms of design, and to be honest, it doesn't look like the good guys at Mazda have spent much time on it. In fact, the only thing I find remarkable is that they've opted for that badass-discreet look, which seems to suggest that the MX-5 RF -like the MX-5 soft-top- is also a car designed more for having fun behind the wheel than for showing off.

Personally I find it a bit boring, and I would have preferred to see an MX-5 RF with a different look, such as a classically inspired and elegant customization: blue or green metallic for the bodywork, interior in a warm color, wheels and discreet exterior details in aluminum color... I think it would have been an interesting counterpoint to the sportiness of the Speedster Evolution... Don't they say that variety is the spice of life?

Which one do you like best? What do you think the MX-5 of the future will look like?