The Range Rover Evoque Convertible is based on the three-door body and changes its roof for a soft top that opens in 18 seconds and closes in 21 seconds. The process is fully automatic and can be done circulating up to 48 km/h. 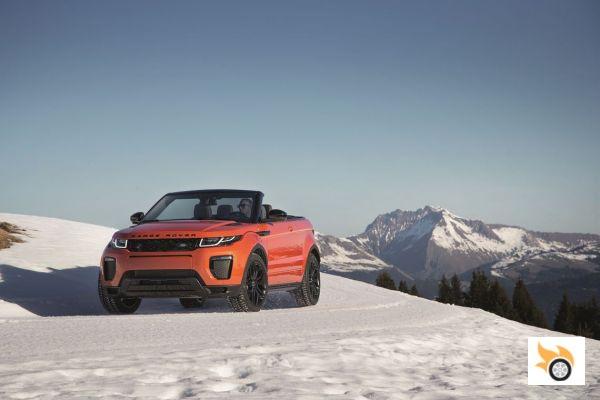 Aesthetically, we must admit that it is not ugly at all; for an SUV its silhouette is not massive and the design is almost refined. Land Rover claims that the soundproofing with the soft top on is similar to that of the closed version. The boot, meanwhile, is affected by the soft top system. From the 421 liters of the closed Evoque we went to 251 liters in the case of the cabrio. The small Golf I cabrio-style tailgate is also not particularly practical due to the limited opening. 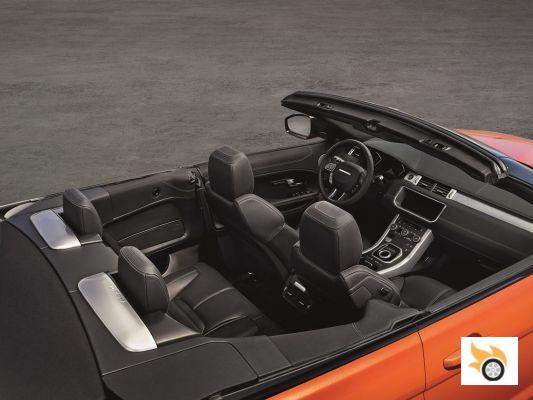 Obviously, the various structural reinforcements (on the floor, sides and A-pillars), the pyrotechnic roll bars hidden between the passenger compartment and the boot, as well as the weight of the entire electric hood system make the Evoque weigh about 270 kg more than an Evoque Coupé (3 doors). 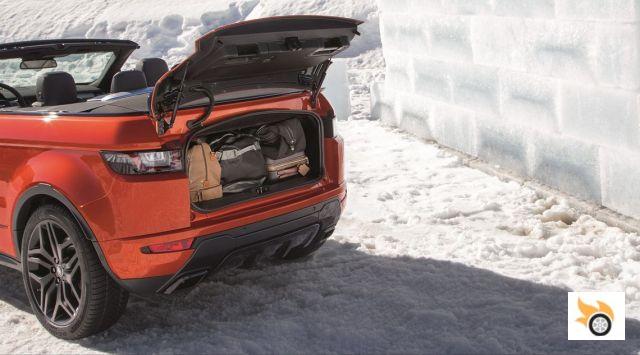 The engine range consists of four-cylinder petrol and diesel engines. The top of the range will be the Si4 petrol with 240 hp. In diesel the offer will be articulated around the 2.0-liter Ingenium engines, which we could already see, for example, in the Jaguar XE.


The new Range Rover evoque Convertible is already available for orders with a price from 54,700 in its version 2.0L TD4 Diesel 150hp 4×4 SE. The first units will arrive in Spain in spring 2016. 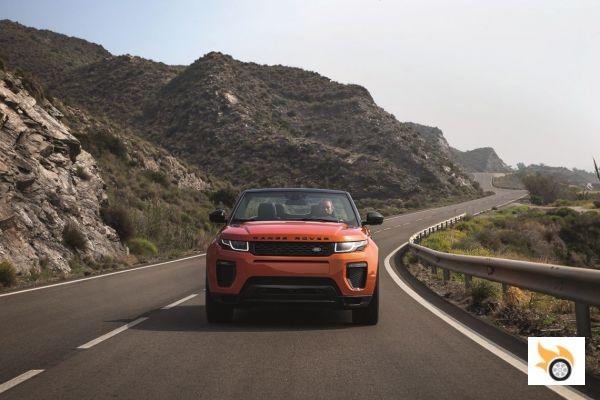 An SUV or SUV with which you can drive with your hair in the wind thanks to an open body is nothing new. History has given us many examples, starting with the fathers of all 4×4's, the Willys Jeep and the original Land Rover. For a time all the SUVs on the market had an "open" version and if the weather was not clement you could count on a hard-top or a soft top (almost always complicated to mount). From the humble Suzuki Jimny to the luxurious Mercedes G-Class, there were many open-top SUVs.

Many of them had the B-pillar in common, for reasons of structural and torsional rigidity; after all, a Jimny or a G-Class, even open, are still true SUVs. Until the Nissan Murano CrossCabriolet arrived and the public thought almost in unison, but what the f... is that! After three years on the market and just 11,000 units, the Murano Cross Cabrio was withdrawn from the catalog in 2014 with the only success of having been the first SUV or convertible SUV or SUV as a passenger car. 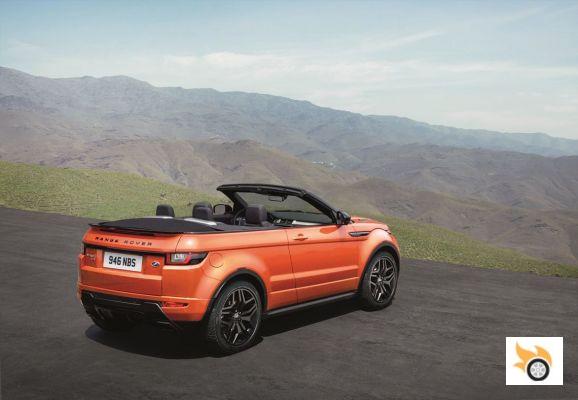 Why does Land Rover think it's going to succeed where Nissan broke its teeth? Regardless of whether we like it or not, we must recognize that Land Rover's bet is risky. And the precedent is not very flattering. The Nissan Murano Cross Carbiolet was a complete failure. However, Land Rover relies on four elements to give some legitimacy to dare a cabrio SUV.


For starters, a Land Rover or Range Rover without a roof is nothing new. The original Defender, the Land Rover of 1947, was already a "convertible" with a canvas roof. And it remained in production for many, many years. To top it off, in the 1980s, when the Range Rover was the only luxury SUV in the world and one of the cars that every sheikh or lord had to have in his stable, there were a multitude of convertible versions made by independent coachbuilders. In other words, the Range Rover Evoque Convertible isn't the first, it's the descendant of a long lineage. 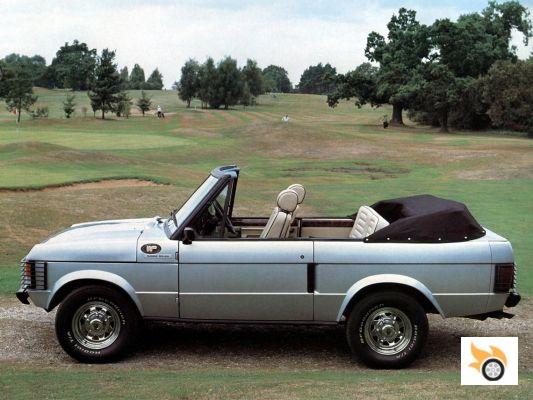 Then, if all the 4×4 "cabrios" that were on the market in the past, like the Suzuki Vitara or the Mercedes G-Class, have disappeared it's because the customer got fed up with how complex and cumbersome it was to manipulate those manual soft tops (the G ended up with an electric one, for that reason). To top it off, some of them weren't exactly watertight models. When you have to snap three or four parts together there comes a point when they don't fit. That won't happen with the Evoque. With an electric soft top, ease is assured. As for watertightness, there's no reason to doubt it. Plus, they can count on the experience of Jaguar's cousins who have been making convertibles all their lives. 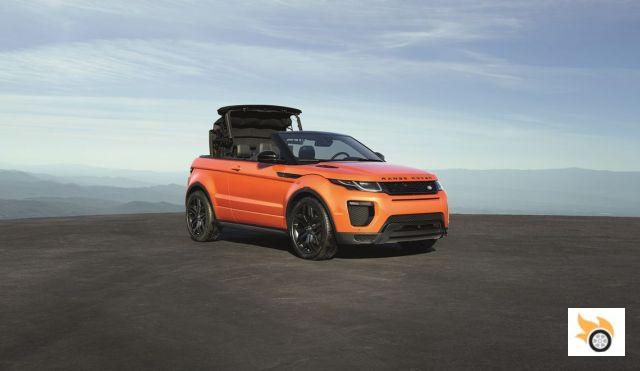 The Evoque's design is one of the most acclaimed of recent years. The car's success is mainly due to its styling. And it is a car of conquest, attracted and attracts many customers who had never before thought of Range Rover or an SUV. Where the Nissan Murano Cross Cabriolet was the object of derision, the Evoque Convertible is genuinely beautiful and attractive, even with a certain sporty touch. 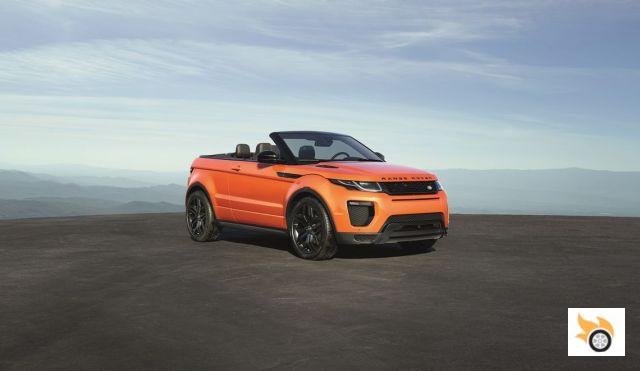 Finally, and perhaps the most contentious point, Land Rover's management has seen a shift in the market. Traditional saloons aren't selling like they used to, MPVs have all but disappeared and, generally speaking, all segments are slowly being eaten up by SUVs. The SUV and crossover market in Europe grew by 21% in 2014, 2.5 million units were sold. In 2013 this market had grown by 13%. Today, one in five cars sold in Europe is an SUV. In other markets, especially in China, the growth of the SUV segment is even higher. So if the SUV is becoming the norm and is no longer the exception, it stands to reason that some of the SUV customer base may also be interested in a cabrio. Obviously, Land Rover does not intend to make volume with the Evoque Convertible, but to create trend, occupy a niche market that could grow and above all is a niche market with strong added value with premium prices. Even so, the brand expects that the convertible will allow it to increase its annual production by 10% (currently at 130,000 units).

Will the Evoque Convertible be a success, then? Land Rover has taken long enough to develop it to be technically on a par with the closed verison. The design is very pleasing and they've ensured that there's a minimum of clientele willing to buy one. However, no matter how much market research, marketing surveys and clinical tests are done, the market is still unpredictable. At the very least, in terms of image and media impact, the Range Rover Evoque Convertible has already lived up to the brand's expectations. 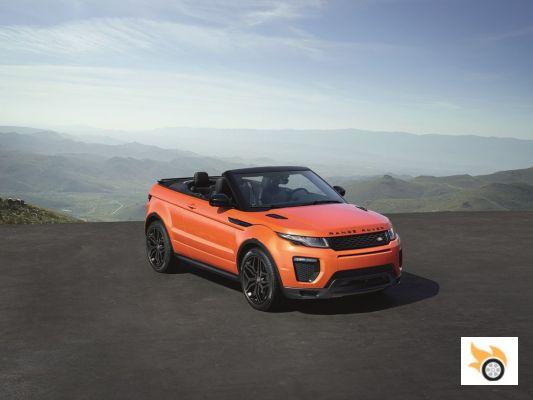 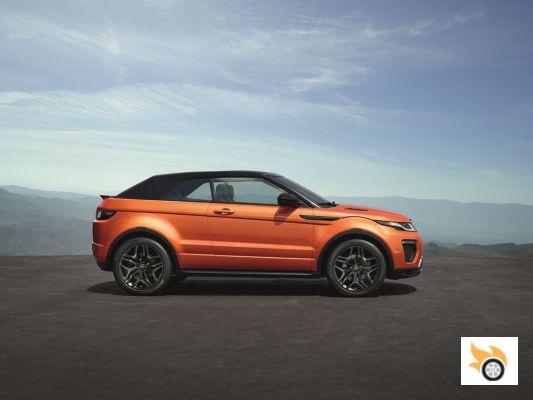