The most beastly and radical Lamborghini Huracán arrives with a 5.2 naturally aspirated V10 with 649 hp (not to be confused with 640 hp) of power, making it one of the fastest and most efficient sports cars on the market. Its engine has received a major upgrade, using the brand's experience in competition. A new intake system to further improve response, titanium valves, a lighter exhaust system and lower negative pressure make this engine one of the best high-performance naturally aspirated engines in the world.

With a torque of 600 Nm at 6,500 RPM, the Huracán Performante is capable of accelerating from 0 to 100 km/h in 2.9 seconds and from 0 to 200 km/h in 8.9 seconds. The top speed of this Italian torpedo is estimated at 325 km / h, also boasting a new lap record at the legendary Nurburgring Nordschleife circuit, marking a time of 6 minutes and 52.01 seconds, although the record has had enough controversy (bonus of this topic below).

The new Performante bases its lightweight construction on a composition that mixes aluminum with materials such as carbon fiber for the frame or composite, specially designed by the Italian brand, called Forged Composite, for various elements of the body, such as the front and rear spoilers, hood or rear diffuser. Thanks to this, the new Huracán Performante is able to drop up to 40 kilos on the scales.

When unladen, the Lamborghini Huracán Performante weighs in at 1,382 kilograms, with a power-to-weight ratio of 2.16 kilograms per hp and a weight distribution between the axles of 43% at the front and 57% at the rear.

The new model of the Italian brand has highlighted, among so many details, the aerodynamic aspect it has. It has the ALA (Aerodinamica Lamborghini Attiva) complement, which, besides being just an addition, was part of an extensive work in which a whole series of improvements were incorporated based on the front. There we find mobile spoilers, more specifically known as "flaps", which help to maintain control of the vehicle in terms of speed, having more control over your body in the curves by intelligently distributing the air passing and decreasing the so-called "drag" in the straight tracks, or the resistance to progress. All this is governed at all times by the Piattaforma Inerziale, or LPI, which tells the electric motors to modify the operation of the flaps and spoilers. The aerodynamics are so well thought out that its rear wing is capable of increasing downforce by 750% compared to the "normal" Huracán.


The appearance of the car in general is everything we would expect in a Lamborghini, little subtlety in terms of smooth lines is concerned, but a radicalism that makes it special. On the side, apart from the redesigned side skirts and underbody with a more aggressive design and two-tone finish, we see a detail that we have also seen in other special editions of previous Lamborghini: the Italian flag.

The 20-inch wheels have a similar design to those of the Aventador S, fitted with Pirelli P Zero Corsa tires designed specifically for this model. The brakes are perforated carbon and has permanent all-wheel drive system with rear differential, giving priority to the power on this axle. The tuning also includes an active suspension system, capable of increasing the rigidity and reducing the rebound of the shock absorber thanks to a fluid that modifies its fluidity thanks to a magnetic drive.

According to Lamborghini, the Huracán Performante pays homage to the thirtieth anniversary of the Diablo by attributing the colour bronze, which is highlighted in the range of tones that are evident on the bodywork. It will go on sale in the summer with a price starting at 195,040 euros for the European market, excluding taxes. 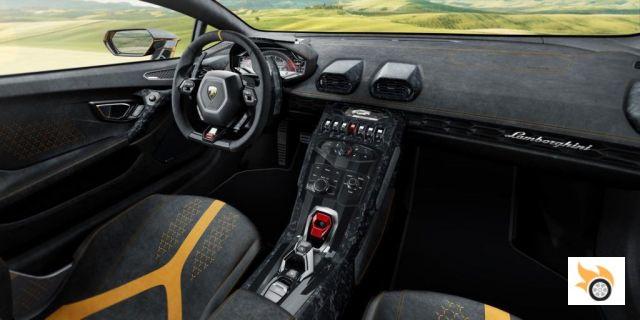 Regarding the controversy raised by the Huracán Performante, many voices were raised doubting its record in the Green Hell, even claiming that the video had been manipulated. At the Geneva Motor Show, the brand wanted to silence rumors and clarify doubts about this issue.


First of all, the tyres used for the record will not be the same as those sold to the standard customer, but are optional semi-slicks: Pirelli P Zero Trofeo R tyres, recommended only for circuits with dry asphalt. They are road legal tyres, but their behaviour in low temperature or wet conditions limits them mainly to track-days. It's not something to get your hands up about either, many other brands have also done it (Seat with the Leon Cupra, Renault with the Megane Trophy R, Nissan with the GTR Nismo...).


Stephan Reil, the head of Audi Sport development, said that the difference in time compared to the Aventador SV is mainly due to the enormous work that has been done on the aerodynamics of the car. The downforce that is capable of generating the Huracán Performante is superior to that of its big brother, allowing a higher cornering even having as a penalty a lower top speed on the straights.

Fast lap telemetry has also been provided, coming from Race Logic's Vbox equipment. This telemetry data indeed confirms that the record was achieved in a single shot, without joining fast times from different sections. It would be nice to be able to compare this telemetry with that of the Aventador SV, but we're afraid that won't be possible. For the time being, Lamborghini has done everything it can to prove that the record is real.

Lamborghini donates a Huracán to the Italian police force ❯