Koenigsegg achieves its record: most expensive accident at the Nürburgring 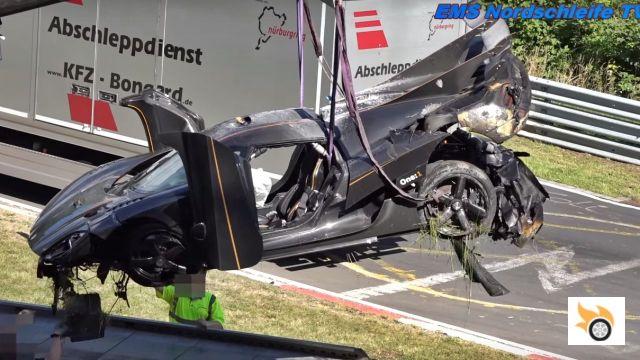 The driver was released within hours, Koenigsegg said.

After a collision with the guardrail, the supercar flew over and off the circuit. We're talking about a car that has 1,350 hp, one for every pound of mass, and is worth well over two million euros. To that must be added the cost of private tests at the 'Ring, as well as the security and rescue services. The car was destroyed, but the important thing is that there were no major consequences.

Unlike McLaren in 2011, when they crashed an MP4-12C, the Swedes have had no problem admitting what happened, although in both cases there were witnesses who saw the whole thing. The video doesn't contain footage of the crash itself, it's of the rescue of the ill-fated sports car. Now it remains to be seen what happened. Either the ABS was disabled and the driver was unable to lift his foot to try to take the corner, or the wheels were locked due to a mechanical problem, as Bridge to Gantry wonders. Locked tires lose their directional ability, even if it's a One:1.

When you're so thin, so on the edge, these things can happen. The goal is to go under 6 minutes and 57 seconds, a record held by the Porsche 918 Spyder.

add a comment from Koenigsegg achieves its record: most expensive accident at the Nürburgring