It's already in its third generation and it's clear that it has nothing to do with the Picanto launched in 2004. It will be a global model, which says a lot about the designers, as they have to make a car that appeals to the largest number of people on this planet. The South Korean brand not only wants to overcome the more than 1.4 million Picanto sold second generation with the new model, but seeks greater penetration in this highly contested segment. To do this, it has listened to its customers in search of improving the current product. In general terms, we find a completely renewed exterior design, an interior with better perceived quality, new engines and technological innovations in terms of security is concerned.

The lines and shapes are bolder than before, incorporating the front grille that distinguishes both the brand, the so-called "tiger-nose". The front is also more aggressive thanks to the new optical groups with LED technology. But it will also be one of the models with greater customization possibilities within the A-segment, with a range of up to seven colors including Shiny Red, Aurora Black, Pop Orange, Sparkling Silver and Celestial Blue. The standard wheels are 14-inch steel, with a choice of 14- or 15-inch aluminium wheels as an option.

The Picanto will be available in the GT-Line version, giving the small city car a more racing look. In this version, the exterior receives certain details in red, silver and black on the grille, side air intakes, running boards and rear bumper along with a new chrome dual exhaust outlet.

Kia will not offer its new model in a three-door body style.

The new model increases its wheelbase by 15 mm to 2400 mm (which translates into more space for passengers), having shortened the front overhang by 25 mm and increased the rear overhang by 10 mm. Thanks to the latter increase in overhang, the trunk grows from 200 liters of the outgoing generation to 255 of the coming generation. It also has a double floor with a dividing lid and, underneath, a space for a full-size spare wheel. The total length of the bodywork is 3,595 mm.


Inside, at least visually, a big qualitative leap can be seen. According to Kia, the interior materials and trim have been substantially improved. Due to the increased dimensions, the interior enjoys a greater visual width with a predominantly horizontal design that looks really good. But what stands out the most is what is in the center of the dashboard: a seven-inch floating touch screen, with which you can manage many of the car's systems and whose controls are located near the driver's line of sight. 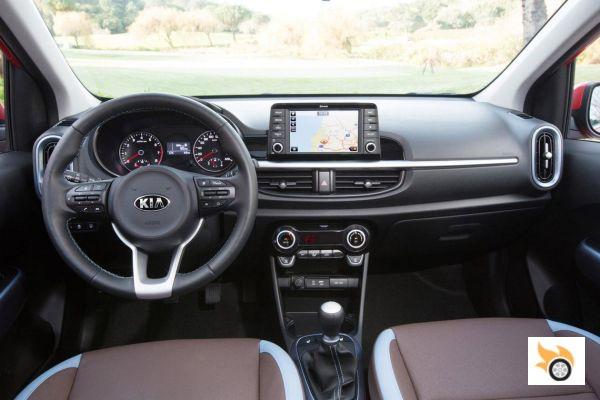 They say from the brand that the dynamics and stability of the car has been improved with a new tuning, thanks in part to new stabilizer bars. On the other hand, having a longer wheelbase, the pitching has been reduced, thus minimizing the inclinations in heavy braking. The steering has also been modified, being 13% faster compared to its predecessor and its gear ratio has been reduced from 3.4 to 2.8 turns of the steering wheel between stops, so it should be more agile and reactive on urban routes.

All options will come as standard with a manual gearbox, although the 85bhp 1.2 will be available with a four-speed automatic transmission.

Kia also claims it is the safest car in its segment. The use of new materials in its structure means that the weight of the chassis has been reduced by 23 kilos, increasing torsional rigidity by 32%. Passive safety also improves thanks to its standard airbags (front, front side and curtain) highlighting in the section of active safety autonomous emergency braking, which is included as an option and the warning of involuntary lane change.


Nor will be missing things like the rear view camera, connectivity via Apple CarPlay or Android Auto, or access and keyless start.

The new Picanto will go on sale in Spain at the end of the second quarter of 2017, with Kia's exclusive warranty of 7 years or 150,000 km as standard.