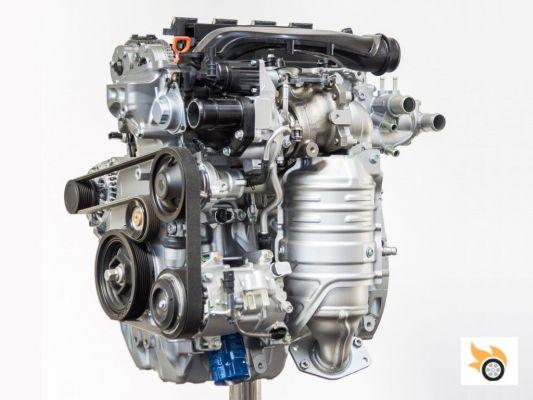 These engines are part of the new family of petrol engines, with the well-known VTEC variable valve system, direct petrol injection and turbocharging. They are made "from scratch", and we can estimate their power outputs at around 100bhp and 140bhp respectively. The ninth-generation Civic still uses naturally aspirated VTEC engines, a 1.4 and a 1.8.

The VTEC Turbo engines are part of the "Earth Dreams" family.

According to the automaker, the new gasoline engines will offer "a combination of dynamic performance, best-in-class power and excellent fuel economy." Going into more tangible details, we know that they will use low inertia turbochargers, that is, they will blow little. In other words, engines made to go low and medium revs, at high revs we'll have to see how they go.

I trust that, Honda being the world's leading manufacturer of internal combustion engines, the product will be good. I would not like to see, once again, engines that do not improve the real economy of their predecessors, but are more uncomfortable, less refined and moreover less reliable in the long run. By the way, the press release doesn't say that the 1.0 VTEC Turbo is a three-cylinder, but we can take it for granted.

The tenth-generation European Civic will continue to be produced in Swindon (UK), in five-door bodywork. 270 million euros have been committed to new technologies and processes to produce the new model.


Honda to unveil hybrid and electric plans in Frankfurt ❯

add a comment of Honda also falls into extreme downsizing