The Porsche 959 celebrates its 30th birthday

Initially built to demonstrate Porsche's technological superiority, the 959 used all the brains available in the R&D department at the time. This high-tech achievement influenced the entire 911 lineage for the next 20 years, allowing the timeless 911 to remain at the top of the sports car hierarchy. 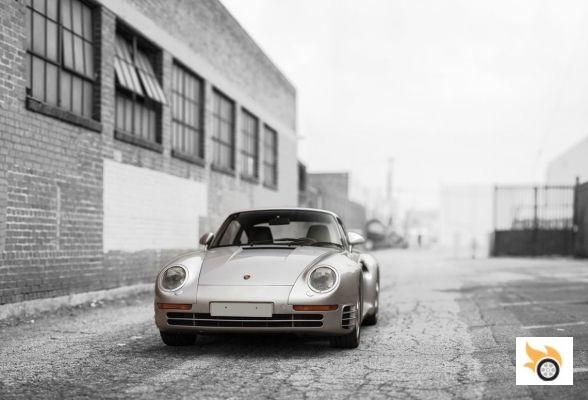 The car that would later become the 959 was initially presented in 1983 in the form of a concept car, the Gruppe B. This futuristic "super 911" made clear Porsche's intention to participate in the world rally championship in the premier category, the Group B. But it also provided solutions that we now consider commonplace in a modern car, especially in a Porsche. As early as the mid-1980s, Porsche's innovative model featured permanent all-wheel drive, a 6-speed manual transmission, double overlapping triangle suspension (with variable damping), run-flat tyres (Bridgestone) with on-board pressure gauge and two KKK turbos operating in sequence to improve low-revving response and mitigate the "kick" effect when they kick in.

The Porsche Gruppe B, unveiled at the 1983 Frankfurt Motor Show.

In a way, the 959 represents a contradiction in the brand's philosophy, as Ferry Porsche explains in his autobiography. "It is my personal opinion that an engineer should look for the simplest solution to a problem," explained Ferry Porsche. "But technology is capable of extraordinary achievements if it is given free rein. The Type 959 is a good example of this". Dr. Porsche goes on to say that even so, a certain financial limit must be respected if "commercial success is to be achieved. Occasionally, however, engineers are allowed to realize their dreams, at least to a certain extent. Obviously, that freedom comes at a price and the cost of building the 959 skyrocketed. At first it shouldn't have been such a problem, as the intention was to race in Group B, which implied the production of 200 units to get Group B homologation. But in May 1986, Henri Toivonen and Sergio Cresto lost their lives at the wheel of their Lancia S4 in the Tour de Corse, marking the end of the Group B cars. It was the year of the 959's commercial debut and Porsche couldn't back down, so it went ahead and changed the concept from "homologation car" to "supercar" and technological showcase for the brand. In Germany, the car was worth 420,000 Marks, or about 220,000 Euros today, but in 1986 there were virtually no cars that expensive. Even so, the brand admitted that it sold the cars at a loss; once the balance sheet was done, it turned out that to recover the investment Porsche should have sold the 959 for twice what it was asking... 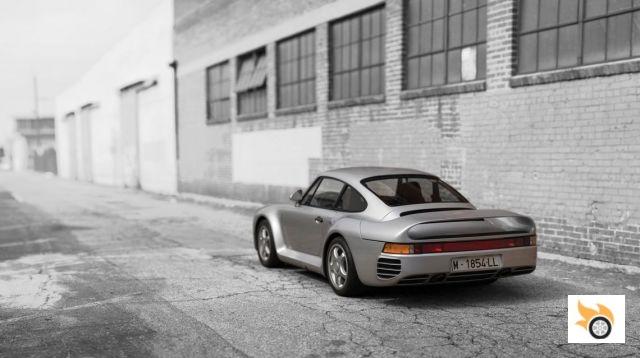 For cost reasons, Porsche decided to use the 911 as the basis for the development of the 959. Unlike rivals of the time, such as the F40, the 959 did not have a tubular chassis - much lighter, but much more expensive - and "made do" with the 911's steel chassis. Likewise, not as many composite materials were used as one might think. The front bumper is made of plastic (polyurethane), the front wings, bonnet and doors are aluminium, while the cabin cell uses the same steel as the 911 and only the rear is made of carbon fibre reinforced with Kevlar (in fact, a little below the rear windows, if you look closely, you can see the joint that joins the two materials underneath the paint). Another element intended to lighten the 959, and that made a lot of ink run at the time, are the hollow magnesium wheels, a technical feat. In the end, although Porsche claimed that steel accounted for only 49% of the car's curb weight (for a passenger car at the time, the proportion was 75%), the 959 was not as light as expected: 1,350 kg...curb weight (an F40 was 200 kg lighter). Once the various tanks had been filled, the 959 was well over 1,400 kg. 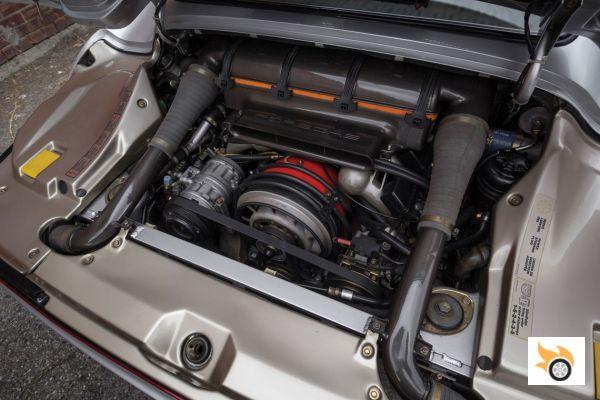 The engine, meanwhile, shares almost nothing with the boxer 6-cylinder of the 911, except for the fact that it is a boxer 6. The mechanical basis of the 959 is actually that of the 956 and 962 of Group C that swept Le Mans. Water-cooled (the cylinder heads, the block is air-cooled), with a displacement of 2.8 liters and supercharged by two KKK turbos develops 450 hp at 6,500 rpm. It should be noted that the two turbos work in sequence, i.e. below 4,000 rpm, only one turbo generates pressure; between 4,000 and 4,200 rpm, the second turbine rotates, but does not act on the engine, it is only above 4,200 and up to 6,500 rpm that the two turbos blow together, up to a maximum pressure of 0.9 bar). 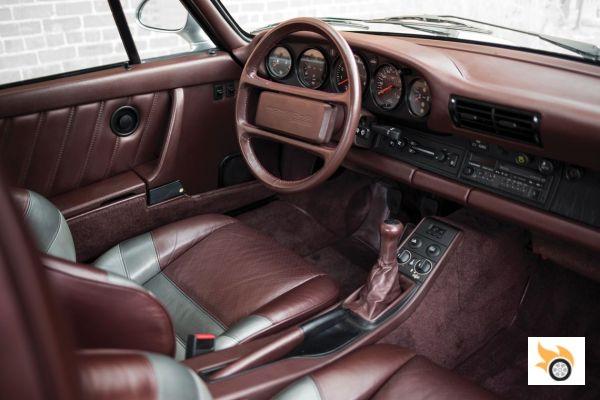 The 959's integral transmission is another technical feat and is still regarded today as one of the most sophisticated in the world. Named PSK (Porsche-Steuer Kupplung), it is the only all-wheel drive that can vary the torque distribution between the front and rear axles under normal conditions of use, not when a wheel on one of the axles loses grip, as most all-wheel drives do. For example under hard acceleration, the split varies from the usual 40% front and 60% rear to as much as 80% at the rear wheels to optimise traction.

Suspensions with piloted, height-adjustable damping are commonplace today, but in 1986, Porsche ventured into this technology. The driver could choose between three different heights depending on his needs (12 cm, 15 cm and 18 cm) and at the same time had a choice of three degrees of damping stiffness. The idea was to give a certain comfort at low speed and a lot of stability at 300 km/h. As the speed of the 959 increases, the control unit lowers and stiffens the suspensions for safety reasons (for example, if the driver left the car with soft suspensions and 15 cm after leaving a parking lot and drives at more than 200 km/h on the Autobahn). This system is just an example of how expensive the car became, as each wheel requires two shock absorbers with corresponding electromechanical modules. It also explains why the 959 weighs so much. That's why Porsche decided to manufacture two variants, one Komfort and the other Sport, also known as S. Logically, that wasn't the official reason, but the truth is that the car never managed to drop below 1,500 kg every time a magazine decided to weigh it... Porsche had to react and created the S. 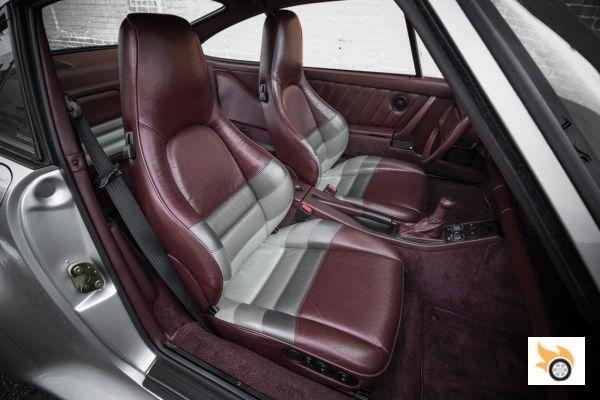 The Sport was to be a lighter variant, so they decided to do without everything superfluous. From the air conditioning, the piloted suspension and its double shock absorbers to the electric front seats, everything that was superfluous was eliminated, even the rear "seats" and the second exterior mirror were wiped off the map. Porsche announced a weight of 1,350 kg, but when the magazine "Auto, Motor und Sport" weighed a 959 S with a full tank of fuel, the scales read 1,566 kg. So the 959 always suffered from obesity. 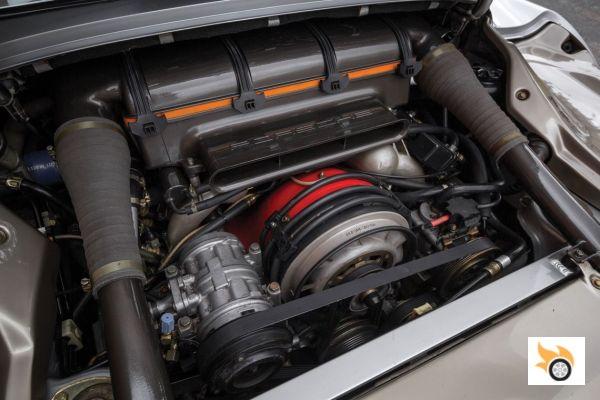 The Sport version of the 959 is the rarest of all, in every way. First of all, there is no Sport like any other. That is to say, some have effectively all the comfort features removed, while others retain some comfort features, such as air conditioning or the second exterior mirror. In addition, the brand is quite opaque about the years and units manufactured. According to some sources, 33 units were manufactured (others speak of 29), while third sources, such as Ian Kuah in an article in Excellence magazine, claim that 7 units were manufactured in 1987 and 30 in 1988, of which 29 were for the US market. The problem is that the 959 was never officially sold in the United States. The proof is in the famous case of Bill Gates and his partner Paul Allen who had their respective Porsche 959 embargoed in California for more than ten years because the cars were not homologated (Porsche refused to give the administration four units of the 959 for crash-tests, resulting in a refusal by the federal administration for the importation of the 959). It wasn't until 2001 that a 959 could be legally imported into the United States, it was a famous Ohio car tycoon, John Dixon, who achieved homologation as an individual. To top it all off, in 1992, 8 more 959s were built using parts left over from the factory, and of course the equipment varies considerably from one to the next. Whatever the truth is, a 959 S must be "light"; and an S with all or part of the equipment of the 959 Komfort loses its raison d'être, no matter how much the brand tells us it's a Sport. 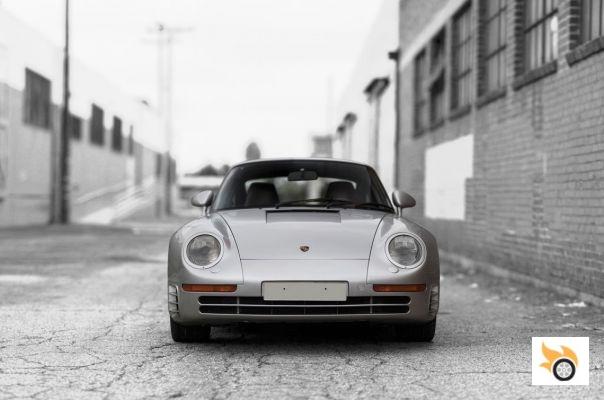 The best known version of the 959 is the Komfort. The 959 that serves to illustrate this small tribute is a unit originally sold to a Spanish industrialist in 1988 (one of the 12 959s that were sold new in Spain). In 2006, he sells it to an American living in Spain, but he decides in 2011 to move back to the USA and doesn't want to leave his car behind. So the 959 crosses the pond too. As we mentioned, homologating a Porsche 959 was an arduous task that practically only the guys from Canepa Design were capable of carrying out. Note, we are talking about full homologation, not the famous "Show or Display" that allows importing a car for exhibitions and shows, as long as it meets some requirements, such as historical and technological importance and of which less than 500 units have been manufactured. In addition, with this import you can not do more than 4,000 km per year, that is, almost nothing. In this particular case we opted for the "Show or Display" homologation.

Since then it has changed owners several times for a higher and higher price. RM Auctions, which will put it up for auction at the Pebble Beach Concours in a few days, already sold it in January last year at an auction in Arizona. This unit is already "famous", but seeing the new photos and that this year the 959 turns 30 years old (it was presented at the Frankfurt Motor Show in 1985) we could not miss the opportunity to remember one of the most important Porsche in history. 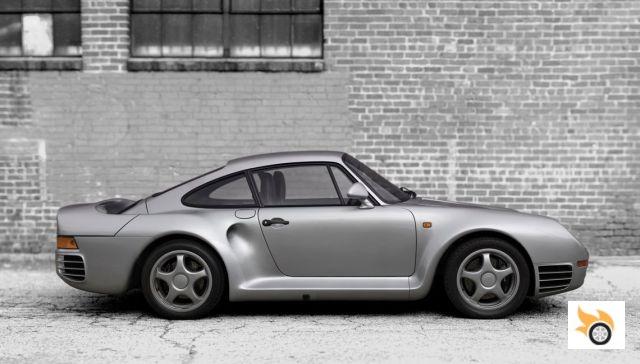 In the end, the 959 turns out to be the most admired Porsche in the history of the brand. Its rarity, it is considered that 300 units were produced in total (not counting the prototypes and pre-series) and its difficult maintenance, make it not the supercar of choice for many. However, the 959 is the most versatile Porsche in history. It won the Paris-Dakar in 1987 and the 1986 24 Hours of Le Mans in its category (IMSA GTX) finishing 7th overall. And of course, at the wheel of this car you can go to the opera as well as on a circuit. It will be imperial, comfortable and elegant at the opera, while it will be fast and efficient on the track.

The Pontiac Aztek was not only an ugly car, it was also revolutionary. ❯

add a comment of The Porsche 959 celebrates its 30th birthday