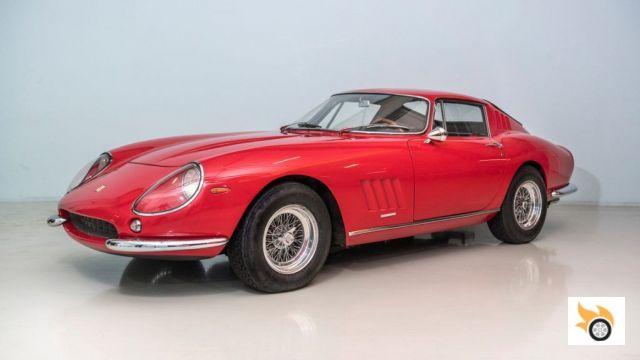 On its public debut in the French capital, the 275 was greeted with universal praise for both its styling and dynamic character.

This particular example was purchased by a Sir Gordon Walker of Northbrook, Illinois, who brought it to the U.S. It remained in his ownership until 1983, when it was sold to Ferrari South USA. By the late 1980s, the car resided in the Swiss collection of Albert Obrist, who assembled arguably the most complete and renowned collection of Ferraris in the world. Obrist chose this car because he believed it to be the most important of all 275s, given that it had chassis number 1. A few years later, this 275 GTB/4 changed hands to become part of another world-renowned collection, this time in England, and remained in storage until the turn of the century.

In 2004, Coys auction house sold it at its Monaco auction to the current seller, who used it occasionally for a variety of events. Coys, again, is selling the car, specifically it will do so at the Royal Horticultural Halls auction in Westminster on May 18.

Jean-Pierre Beltoise, Formula 1 driver and journalist for L'Auto Journal, wrote on testing the car in 1967: "It is, first and foremost, a serious and comfortable grand tourer, but retains the lineage of a racing car in engine response and handling quality. The 275 GTB/4 is one of the finest cars created in our time."

Chris Routledge, Coys CEO, said, "The GTB/4 has always been considered the most beautiful 12-cylinder car from Maranello, and it is with some excitement that we are bringing back the factory prototype, chassis number 1 and the first to be shown to the world in 1966."


Global NCAP does not like Renault Mégane advertising in Uruguay ❯