SRT chief Tim Kuniskis admits the company wanted to go in a different direction than the Challenger competition. Ford and Chevrolet clearly aimed for the racetrack route with their latest horsepower, the Camaro ZL1 1LE and Shelby Mustang GT350R. To be different, SRT focused on a target of 1,044 Nm of torque, 852 hp and a quarter-mile covered in 9.65 seconds. In other words, it's capable of eliciting 1.8G acceleration, according to Dodge the highest in a production car.

The Challenger Demon is capable of covering 0-60 mph in just 2.3 seconds and passing the quarter-mile mark at 225 mph.

By setting a single target, Kuniskis and the company have claimed to have destroyed not only their direct rivals, but all competition in quarter-mile racing. The Demon is a nine-second production car that will likely cost a tenth of the 918 Spyder's price. 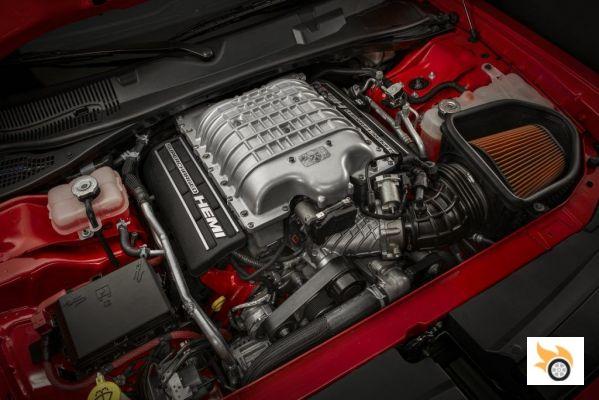 How did SRT do it? Details have been released in a form of Chinese water torture over the past three months. First, we learned of all the weight that had been shaved off the SRT to get a demon. Every seat was stripped except the driver (the passenger seat and rears can be purchased for a buck each). In the end it was thirteen teasers that Dodge showed before the New York unveiling, which included more than a half-dozen cryptic clues that Chrysler has, finally, decoded.

What has undoubtedly attracted the most attention has been the more than eight hundred and fifty horses. To unlock the Demon's 852 hp, in addition to using high-octane fuels, such as those used in NHRA acceleration tests, buyers must also purchase the "Demon Crate". In that crate are skinny front wheels, all the tools needed to change tires at the track, a new engine map, a new air filter, a low-temperature thermostat, a cover plate for easy removal of the passenger-side mirror, and a switch with the letters "HO" in the center.


If left to a valet ("Valet" mode) the car is limited for collective safety.

This activates a high-octane engine map (hence the ECU and air filter), boosting power to the max. Kuniskis claims the Demon is emissions compliant no matter what mode it's running in. All the hardware and "runners," as the skinny wheels are called, fit into a molded foam piece that snaps nicely into the trunk and is easily removed in the paddock. 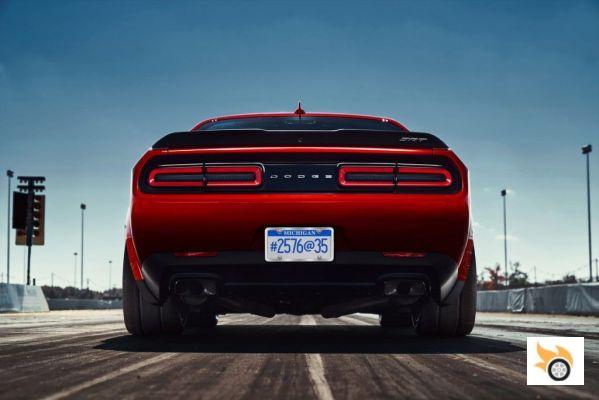 All the demon horsepower is sent to the 315/40 R18 Nitto NT05R rear tires, hidden under fins widened by 9 centimeters.

Achieving that much torque is one thing, delivering it to the tarmac efficiently is another, which is why SRT turned its attention back to drag racing tools. The Demon's launch assist is unlike any other on a road car. The driver of this machine has to know the perfect quarter-mile process.

You lock up the front brakes and take advantage of it to burn the wheel to get out with as much traction as possible. Then, you roll to the starting line and engage launch control, at which point a number of things are happening. First of all, the Demon essentially has air conditioning to cool in the intake intake. This helps suck in more oxygen molecules for the engine. Next, the transmission is coupled with its own brake. A brake locks the transmission in both first and reverse gears simultaneously. This eliminates any chance of the car moving off line when the throttle is pushed to reach optimum revs.


Finally, the Demon's two-stage ignition kicks in. Here, the engine cuts spark and fuel to mid-cylinder, but keeps all valves running, allowing the 2.7-liter supercharger (up to 2.4 on the standard Hellcat) to keep its bypass valve closed and generate maximum boost without reaching peak power. The eight-speed torque converter gearbox keeps all the power in check (18% more torque than the Hellcat). 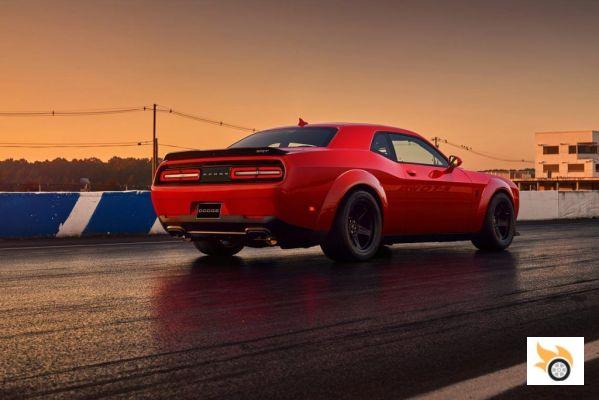 Output revs and tire pressure, both set by the driver, are the two most influential variables in getting the front axle off the ground. Apparently, the Demon has all the right conditions for wheelies. According to FCA, it's the only production car with that capability.


The suspension is tuned specifically for quarter-mile racing. The type of setup needed to transfer a large load on the rear axle for maximum grip can make the car a bit useless on public roads. To avoid this situation, the adaptive dampers will be able to go into a more tame setting, intended to improve stability, as soon as the driver removes the throttle.

The Demon's Uconnect system has a special display dedicated to intake temperature and the car will tell exactly how long it needs to wait between runs to generate maximum power during each pass. 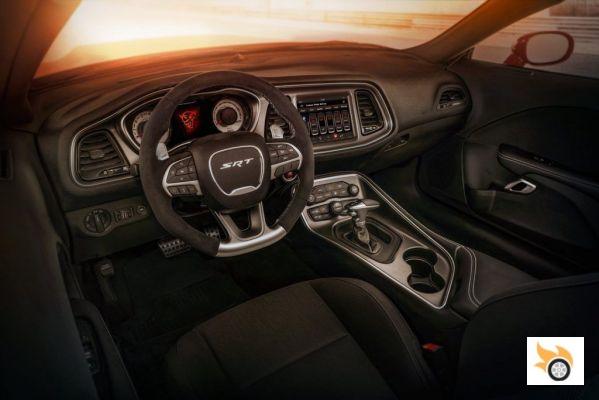 The Demon will hit North American dealerships this fall with an estimated base price of $85,000, but higher transaction prices are possible due to high demand. The price includes a full day of training with professional instructors. Dodge will produce 3,000 of these demons a year, plus another 300 for customers in Canada. We won't know if there will be another car like this from the factory in the future, certainly the Challenger Demon has already become history.

If you want to know more, we've got this exhilarating video: