2018 Chevrolet Camaro ZL1 1LE, the fastest Camaro on the Nürburgring 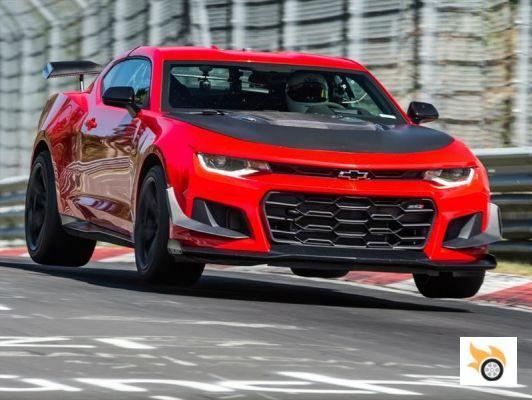 The Camaro ZL1 1LE is specially prepared to run on straights and curves, unlike FCA's demon. Although the power output of the LT4 6.2 V8 engine is still 640 hp, it has several aerodynamic upgrades to have even more power hitting the asphalt. The takeoff thing in the press photos has become a classic anyway. It also has tires that are legal by the skin of its teeth, the Goodyear Eagle F1 Supercar 3R, a bit more radical than the ZL1.

Another trick that makes it faster is the Multimatic Dynamic Suspension Spool Valve (DSSV) suspension, which is fully adjustable to the needs of the track. As many of you may have guessed, the winning unit was tuned specifically for the German track. Finally, the fifth and sixth gear ratios are shorter.

The result? It's 13.56 seconds quicker around the track than the 2017 Camaro ZL1 with the 10-speed automatic, this time it was achieved with a manual gearbox. Camaro's chief engineer and driver on the test is the same guy, Al Oppenheiser. It's hair-raising how fast he makes the shifts, although it's a little more scary to see how he sticks with the steering wheel and the American cavalry in every corner of the Nordschleife. Enjoy it:

add a comment of 2018 Chevrolet Camaro ZL1 1LE, the fastest Camaro on the Nürburgring