Power is sent to the rear wheels via a torque vectoring limited slip differential, meaning the wheel with more grip gets more torque. So much muscle allows it to do a 0-60 mph time of just 4.2 seconds and reach a top speed of 250 mph. The braking system consists of 410 mm discs at the front and 372 mm discs at the rear that work with six-piston and four-piston calipers, respectively. The powerful braking system is housed in rims with 20-inch Continental tyres.

The GTS-R is aesthetically differentiated by a suitably redesigned front end, with a new diffuser, larger air intakes, carbon fibre grilles and a spoiler, while Alcantara trim has been added to the interior. 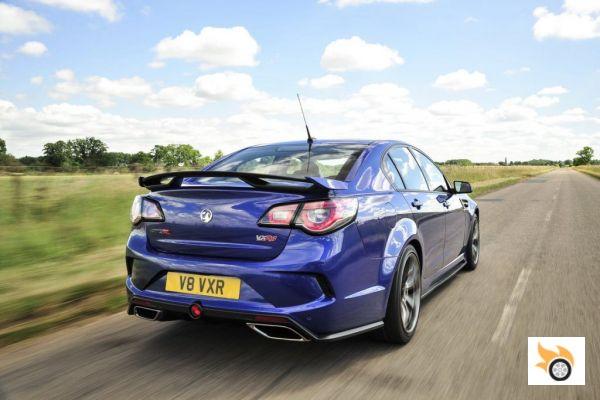 The model is on sale now, with just 15 available to the UK market at a price of £74,500, about 84,500 euros at the exchange rate. At the moment we know that eleven have already been sold.One of the explanations for its high price, in addition to its guts, is the fact that it is manufactured in Australia. As that country has ceased to be profitable, this year close all its factories after the coordinated espantada Ford, Toyota and Holden. The first UK deliveries will arrive before the end of 2017, with the rest expected in the first quarter of 2018.

This will mark the close of a 10-year history for the VXR8, which began when it replaced the two-door Vauxhall Monaro in 2007 (Pontiac GTO in the U.S.) The GTS-R is predicted to be the last Vauxhall V8, because the brand's new owner, the PSA Group, will likely concentrate on smaller capacity, higher-volume vehicles, and such synergies with GM are no longer in place. In fact, as a result of this, a successor to the VXR8 under PSA would be more likely to use a turbocharged four-cylinder engine, although a high-performance V6 wouldn't be such a bad option.


In any case, I don't think we'll see such a sedan in Europe again for a good season either.

add a comment of Vauxhall VXR8 GTS-R, the ultimate expression of the traditional Aussie saloon