Over 500 landmark JLR cars reside in the purpose-built 14,000 square metre facility, in what the company describes as a "living assembly of British motoring history".

The intention is not to keep these gems stationary in this new centre, but we are already being warned that we will see these classics parading around at various meetings and exhibitions. 80 employees work in these facilities and by the end of this year the number will rise to 120 workers. It is not only love for their heritage, it is also an interesting line of business.

As well as using traditional techniques to restore these cars to their former glory, staff have access to the latest technology, such as 3D scanning and computer aided design, which allows the reintroduction of parts for the Jaguar E-Type and Range Rover panels. Without these advances, spare parts for such old cars would be very expensive.

The facility was officially opened last Wednesday by JLR chief executive Ralf Speth and the head of the company's special operations division, John Edwards. All of the cars restored by the plant's staff will be overhauled by Andy Wallace, new chief test driver and winner of the 1988 24 Hours of Le Mans aboard the Jaguar XJR-9 LM.

"Classic Works is of great importance to JLR," Edwards said. "It's much more than a building, it's the heart and soul of Jaguar-Land Rover Classic for our customers around the world." 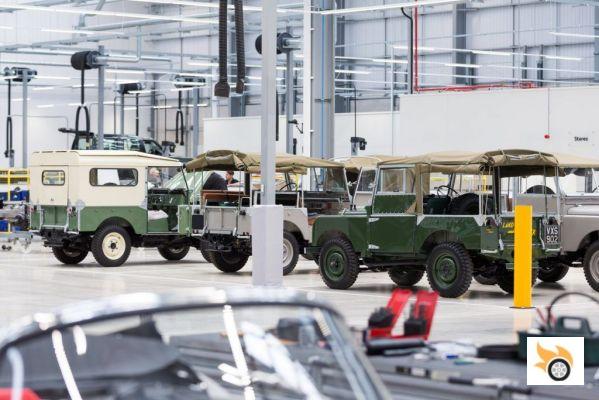 Complete restorations, parts that were thought impossible to get... all with the experience and the guarantee that it is the brand itself who is in charge of the process, also certifying a job that surely adds a few tens of thousands of euros to the value of the restored car. If you want to soak up the history of Jaguar and Land Rover, you can always make a visit to the facilities at a price of 49 pounds per person -56 euros at the exchange rate- from September.


Italdesign and Airbus bring the future closer with Pop.Up ❯