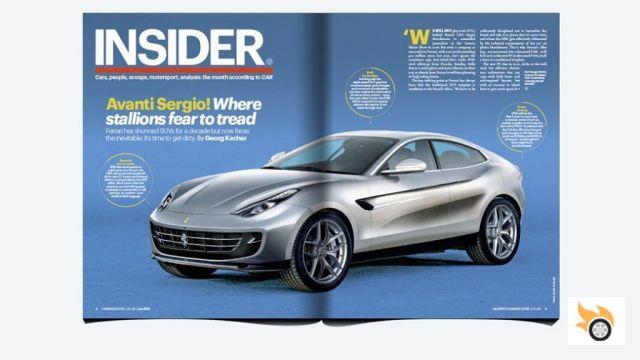 Under the euphemism that they are going to "reinvent the segment" may appear a kind of crossover, closer to the world of tourism than the SUV. Recall that a crossover can be defined as a car disguised as an SUV, a little wider and probably higher. This would allow the future model to drive on bad roads (which in China and Russia is very common) or have more mobility in bad weather, something noticeable in the northern states of the U.S., Switzerland, etc..

Ferrari sees a very juicy pie in the segment of large luxury cars, thinking especially in Chinese, Arabs, Russians and Americans. There are Ferrari customers who want more space and more comfort, the sporty and purist behavior becomes a secondary consideration for people with a lot of money -which, on the other hand, can also afford other sportier models-. It is also going to grow its range of hybrids. Ferrari wants to double its profit by 2022, and to do that it has to increase production.

At the moment the brand has self-imposed a production limit of 10,000 units a year (in 2017 the target is 8,400 units), with the intention of maintaining exclusivity and its cachet: Ferraris must be rare and desirable, they are luxury objects, works of art on wheels and registrable. In addition, raising the production limit puts Ferrari in a swampy area: having to meet CO2 reduction targets in the European Union, and right now a low-emission Ferrari is science fiction.


Ferrari can make a consolidated profit of between 950 and 1 billion euros this year.

The Maranello factory has the capacity to double its production, but whether it is in its interest to do so is another matter. Il Commendatore may not have thought so, but things have changed a bit since he left. Ferrari's main competitors, meaning luxury manufacturers, are going to launch very luxurious SUV models in a relatively short time, such as the Lamborghini Urus, the Rolls-Royce Cullinan... and the Bentley Bentayga and Aston Martin Maserati Levante have already been on sale for months.


Citroën C3 Aircross is revealed as a toy ❯

add a comment from Ferrari F16X could be a reality