Dirt Rally wants to be your realistic rally simulator

Why? Well, for starters, there's one issue that, to this day, is still unfeasible to solve for the conventional home user: The aforementioned "G-forces". When you've been a driver, or you've been out on the road consistently many times, your body gets used to various inputs to control the car. Your ears work with their G-force activated gyroscopes to assess how much the car turns, pitches and leans in the corners, assessing the forces it is being subjected to. Meanwhile, your ass (yes, your ass) is the one that "reads" in correlation with what your eyes see and what your ears say, how much the rear of the car is going away from the front axle.

From that combination of information comes what we call the driving experience, enhanced by the information that reaches the palms of your hands through the steering wheel, the brake pedal and also sounds and smells.

Part of those sensations, the tactile sensations of the steering wheel and the sound sensations, as well as the visual information, can be more or less reproduced in a "home" simulator, but you will never get the full driving experience. At least not with today's technology.

This means that, when one jumps from driving "in reality" to driving virtually, it is very difficult to match the performance. Why? Well, because for those of us who have spent many years and many millions of kilometres behind real steering wheels, we lack the information that our brains usually work with. We need to activate the yaw sensors, the G-force sensors... Things that the "virtual pilots" have become accustomed to not having, being replaced by the data provided by video consoles and computers.

It is an experience, therefore, that today is still very distant. And although it has points in common, it is still not fully equivalent.


But beyond these judgments that I always like to remind you of, to emphasize that we must value real and virtual driving experiences as two very different things, we must also praise the effort that, day in and day out, many video game creators are carrying out, in search of mathematical simulation models that are increasingly faithful to what physics and mechanics dictate, so that cars behave as they would in reality.

Some video games with a large circulation boast of their "realism", but this should be taken with a lot of quotation marks. A good example is the most popular and famous car video game on the planet: Gran Turismo. Try to overturn a car, or try to find equivalence between real cars and their video game representations in terms of behavior, and you'll see that there is still a lot to be done on this front. It's true that on a visual level, the most demanded aspect by the buyers of these videogames, we have reached an excellence that is difficult to improve. But there is still a lot to do. Even "geeky" titles like Assetto Corsa are still far from replicating the right dynamics (overturn a Reliant Robin and it will bounce off the ground like a "crazy ball").

It's easy to criticize, of course, but the evolution of the technique will still take time, years, so that at least the damage model and the dynamic model will eventually converge with the physical reality we find on the roads.

And what happens if we change the asphalt for the low grip broken surfaces of the rallies? It gets even more complicated. Think that simulating the tire-asphalt behavior on flat ground and without potholes is already an arduous task that is often beyond the computing capabilities of computers and consoles in our homes. 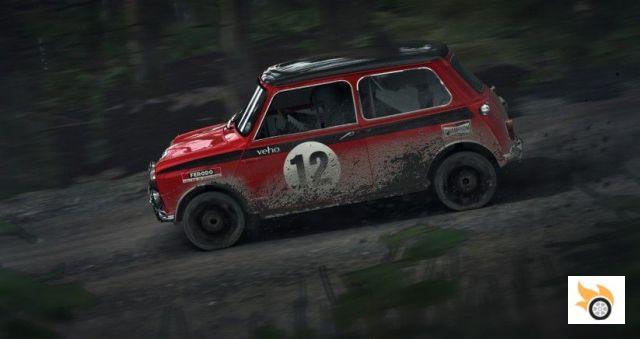 If you try to simulate a rally section, things get really complicated, since you have to factor in surface changes, grip changes, inertia of the unsprung masses, tyre type variation, temperature changes... It's really crazy.

So, although the damage models, with flying plates and so on, have improved a lot over the years, the reality is that rally simulation is even further from reality than conventional tarmac driving simulation.


It's clear that there are a lot of fun rally titles in the past and present, but we are very far away, as I said, from finding a simulation that is faithful to the sensations of rally racing (and I know a little bit about this).

But now Codemasters wants to change this trend. Their new project is called Dirt Rally, and it's a computer game, which you can buy and enjoy right here, that promises to add a never-before-seen dimension of simulation to the familiar visuals of the Dirt series.

It's less "spectacle" and more realism.

The game is currently in "early access". That is, you pay to buy a "beta" that will evolve into the final product, like Assetto Corsa. The idea of Codemasters is to gather opinions of these initial customers who pay to play in the sections and with the cars that the game has right now. From these opinions, the game will evolve and improve, thanks to "the power of the people's opinion".

We think it's a good initiative, do you want to play?

From yesterday, you can now buy your Ferrari F40 from Lego ❯