Audi wins the tightest 24 Hours of the Nürburgring in history

The thing is that the previous Audi R8 took time to become a really valid car for endurance racing. It had achieved really remarkable times at the Nürburgring, taking the first places on the grid, but its electrical problems were many until Audi solved them and managed to win the mythical race of the Nordschleife for the first time.

But this 2015 has surprised us again. With the artificial performance balance set by the ADAC, practically all the top cars in the SP9 category (the FIA GT3) ran more or less the same in the lap to lap, but in the end we lived a fight between BMW and Audi, with Mercedes-Benz as a luxury spectator, and with an unexpectedly competitive Porsche 997.

The race started dominated by BMW and Mercedes, but the "gull wings", which next year will be relieved by the brand new Mercedes-AMG GT3, had the usual problem in terms of tire and fuel consumption, having to stop more often than their rivals, and showing more problems to maintain a consistent pace in the lap to lap. So, although in the first hour of the race gave the feeling that they were going to be in the fight for the final victory, they ended up sinking progressively.

The thing was a fight between the new Audi R8, the veteran BMW Z4 GT3, which also faced his last race before his retirement in favor of the M6 GT3, and the horde of Porsches 911 997 GT3, among which unexpectedly highlighted the Frikadelli team (Sabine Schmitz and company) that came to lead the race. But before it got completely dark, a downpour burst onto the track and killed the hopes of the red and white Porsche, when they went off the track and crashed, running on slick tyres while their rivals changed to wet tyres. 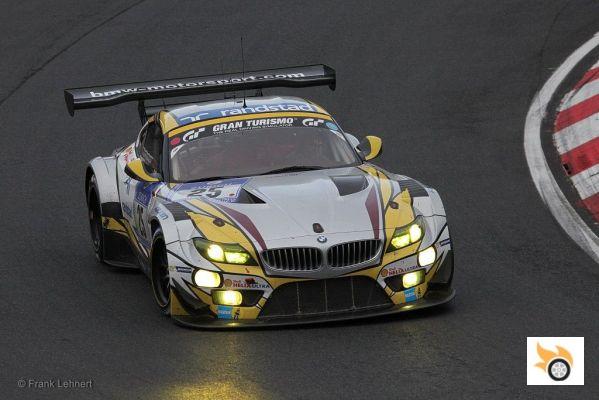 Some new R8 LMS started to accumulate problems. One was out by accident, another burned his electrical system and had to spend a good few hours in the pits to repair it... The fight was reducing, and the best positioned BMW Z4, the pole, the number # 26, also burned his options in a fire in the pits. Fire would also suffer the Audi that would eventually win the race while refueling. In both cases, moving the car while it still had the fuel hose plugged in caused a spill of gasoline that, when reaching hot areas of the car, would end up catching fire. The BMW was more damaged and lost time in the pits.

It came down to a head to head battle between the surviving #28 Audi R8 LMS and the #25 BMW Z4. Curiously, the Audi pitted and set fire to its brake pads in a second scare that seemed to take it out of contention for the win. But a quick fix of the extinguisher got rid of the problem and put him back on track. Lap by lap he seemed to control the distance with the BMW Z4 to the millimeter. With 19 pit stops for both cars, the checkered flag fell, and the distance between the winning Audi and the BMW was just over 40 seconds, record for being the shortest distance in the history of this race.

The third step of the overall podium went to the Porsche 911 GT3 #44, demonstrating that the artificial balance of ADAC performance achieves what it sets out to do: to make competitive a car like the Porsche 997, in private hands, and completely out of step with its rivals. We'll have to see what happens next year with Mercedes, BMW and Porsche debuting new GT3 machines in front of the already-raised R8 LMS. Nissan, meanwhile, had to settle for putting a car in the Top 10, without having at any time the ability to fight for victory by pace. And the #35 car, with Lucas Ordoñez in the driver line-up, was placed ninth, yes, but his best lap was nine seconds off the best laps of the winners, demonstrating a lack of speed that was also punctuated by an extra pit stop. The GT-R needs another modulation in the ADAC performance balance to be competitive. 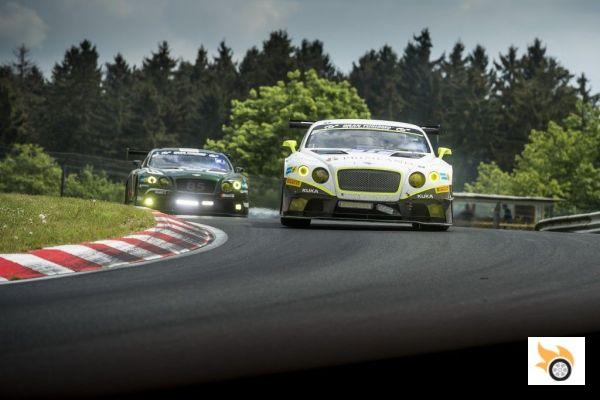 Bentley, making its debut at the 24 Hours of Nürburgring, managed a good eighth place, after a weekend in which the M-Sport prepared Continental GT3 proved relatively fast, but was a big guzzler in terms of tyres and fuel (it stopped four times more than the race leaders). 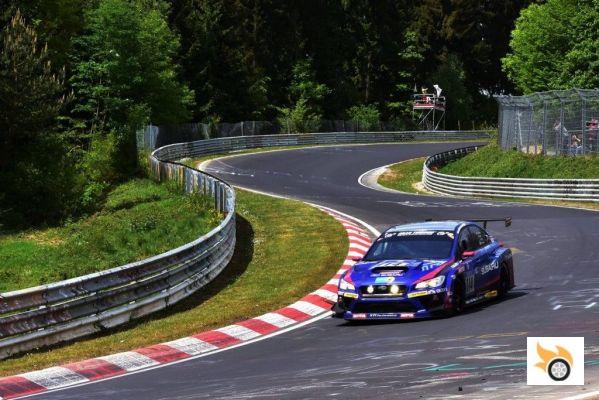 As for the secondary categories, we must highlight one more year the excellent work of Subaru, which returned to win the SP3T category one more year with the closest car to the series of that category, this year very little competed, all be said. Of course, Subaru's achievement was not to win SP3T, but to put the SP3T car in 18th position overall, a really considerable achievement, completing the whole race with only 18 pit stops, with a constant and consistent pace. Among his drivers was, by the way, Tim Schrick, the famous German DMax motor show presenter.

Special mention also goes to the Opel Manta of the Kissling team. The now legendary racing car with the "fox tail" managed not only to finish the race, but also to win the SP3 category... Not bad for a thirty year old car, isn't it?

Let's see if next year we can bring back the live narration of the 24 Hours for all of you.

Audi celebrates the 40th anniversary of its five-cylinder engine ❯