God save the luxury King: this is the new Rolls-Royce Phantom

Speaking of design, the Phantom VIII changes, but it is immediately recognizable as a Phantom.

At the front, the typical Rolls-Royce grille is integrated into the bodywork for the first time along with the light clusters, whose light beams give visibility of up to 600 metres. On the side, a horizontal rib running across the middle of the 22-inch wheels is introduced to give it dynamism. The rear is very traditional, with polished steel elements that give it even more distinction. If I may quip, the tail lights look very similar to those of the current Fiat 500.

Rolls-Royce has not yet given the exact measurements of the car - it will be between 5.85 and 6.15 metres. It has confirmed that the extended or long wheelbase version (Long Wheel Base) is 22 centimeters longer. 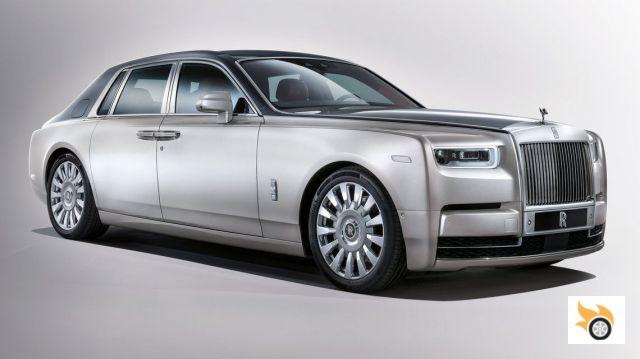 Even if you might think that this is a thorough renovation of the outgoing model, which was launched in 2003, the flagship of Rolls-Royce is a completely new model.

The car is basically a Penthouse apartment hitched to four wheels and a twin-turbocharged 6 3/4-liter V12 engine that develops 571 horsepower and 900 Newton-meters - at a tap of the gas - from 1,700 revolutions per minute. All that power is transmitted to the rear wheels via an eight-speed ZF transmission. Gear changes are synchronized with the car's GPS to optimize shift points based on where the driver is going. The idea is to optimize engine speed according to the stretch of road the driver is driving on. Why should the driver have to worry about such trivialities?

The new platform is extensible and modular and can be adapted to different drive systems, something to consider given that Rolls-Royce's next SUV will carry it and will feature all-wheel drive. It can also be adapted to different powertrains. The Phantom VIII in fact debuts what Rolls-Royce calls the Architecture of Luxury, based on massive use of aluminum to gain rigidity and lighten weight.


Although the platform of the new Phantom VIII is completely new and its weight is considerably less than what happens, the car weighs 75 kg more. Much of the weight increase is due to the high sound insulation to keep the occupants away from any noise coming from outside. In fact, one of Rolls-Royce's aims was to create the quietest car in the world, including 6mm two-layer glazing throughout the car, and hundreds of high-density felt and foam layer inserts, located for example under the headliner, in the doors and in the boot, ensuring maximum sound insulation for the occupants. The previous model was already very quiet; this generation is 10 per cent quieter at 60mph.

Rolls-Royce also worked closely with its tyre supplier, Continental, to invent Silent-Seal tyres, which feature a specific foam layer placed inside the tyre to eliminate cavity noise and reduce overall tyre noise by 9 decibels. It's so quiet that when Rolls-Royce's acoustic test engineer reviewed the first results of the road and vibration tests, the sound levels were so low that he had to check that his instruments were calibrated correctly.

Beyond that, the car is equipped with a wide range of technologies, such as a night vision system, active cruise control, parking assist with four 360-degree cameras and long-range sensors designed to detect traffic before its driver can. Inside, the traditional analog dials on the dashboard have given way to a 12.3-inch TFT display with LED backlighting, which electronically draws the clocks with virtual hands. Meanwhile, in the centre of the dashboard is a large central information display, which can be hidden behind the centre column when not in use. This allows occupants to attend to the analogue clock, which will continue to emit the sound of the seconds hand, which is said to be the most audible sound inside the Phantom.


It has technologies previously seen as four-wheel steering or a self-leveling air suspension that has electronically controlled shock absorbers, that is, that predicts the terrain and prepares the suspension to roll as smoothly as possible. 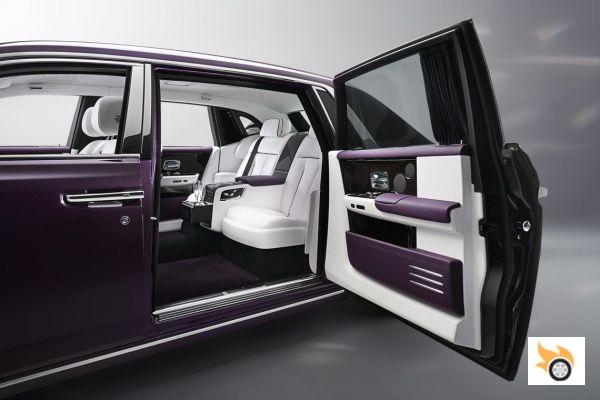 Don't worry if that doesn't sound like enough information, the Rolls-Royce Phantom VIII spec sheet gets significantly more insufferable, or impressive, depending on which side of the Wall Street barricade you're reading this.

Rolls-Royce has coined the term "The Embrace" to describe the eventuality of getting into the car. Once this miraculous door opening and closing ceremony is successfully completed, cold days in the car will be a thing of the past. The seats are heated, the armrests on all doors (and rear center) are heated, the front center console lid is also heated, and even the C-pillar! Penguins and polar bears can suffer the hell out of this car. For everything else, it sounds like you could enjoy summer comfort parked at the South Pole if you wanted to.

Another interior detail worth noting is the so-called "The Gallery".

Said gallery is literally a dashboard art installation that buyers can commission individually. Not sure what to put in there? Rolls-Royce has a few suggestions: works as varied as an oil painting inspired by England's South Downs in autumn by renowned Chinese artist Liang Yuanwei, a 3D-printed gold and silver map of an owner's DNA created by German Thorsten Franck, a handmade porcelain rose print by Nymphenberg, or a high-quality silk abstract design by young British artist Helen Amy Murray. These are just some of the creations offered by the British brand. As I mentioned earlier, "The Gallery" is entirely up to the consumer's taste.


Hear that, rich people? No more cut-out pictures of the granddaughter stuck on the dashboard, no more little virgins put on after the fact. Now you can have all that done to the highest standards on the dashboard. It doesn't look like Rolls-Royce has announced an official price for the Phantom VIII. And I guess if you have to ask, you're probably one of the many, many people (the usual, come on) who can't afford to buy one.

add a comment of God save the luxury King: this is the new Rolls-Royce Phantom