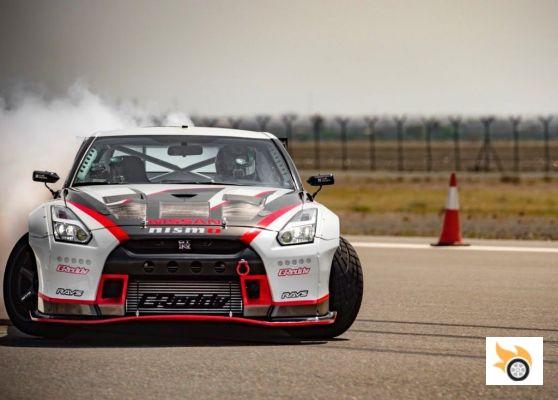 The author of the feat is Masao Kawabata, the current DK of Japan.

With just three attempts to set the new Guinness record for drifting, the figure to beat is 304.96 km/h. The previous record is from 2013, when Polish driver Jakub Przygoński managed to drift at 218 km/h in a Toyobaru GT 86/BRZ squeezed to over 1,000 hp of power. Nissan didn't want to beat the previous record, they wanted to smash it, and it had to be over 300 km/h.

Do you have any idea what it's like to go 30 degrees at that speed?

In both cases they have used facilities suitable for such attempts, airport runways. The Polish did it on the runway of Biala Podlaska (Warsaw, Poland) and the Japanese did it on the runway of Fujairaj International in the United Arab Emirates. What's more, behind the attempt is Nissan's Middle East division. The car was being tested and tested at the Fuji circuit in Japan.

The record was broken on March 3, but we only found out about it this week. Anyway, we can't consider this as Arab drifting (Tafheet or Hagwalah), because according to Allah's rules, that's done with front wheel drive cars, fully stock, and on roads with traffic.