Fergal McGrath and Julian Warren, both from Honda's R&D department, took on the challenge of driving across Europe with the lowest fuel consumption. On average, each 50-litre tank of diesel in the 120PS Civic Tourer 1.6 i-DTEC lasted 1,491km. The average fuel consumption was 25% better than the official average of the average extra-urban fuel consumption of this model (3.6 l/100 km). 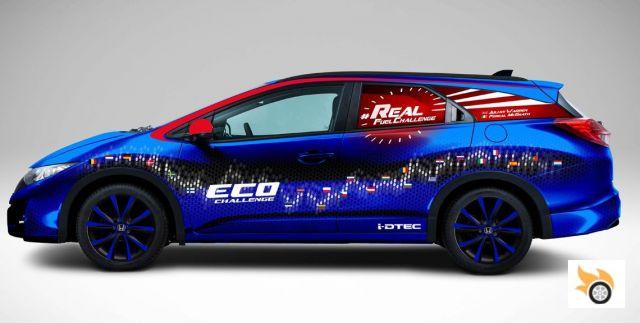 For the record to be valid, the participants had to comply with certain rules, such as collecting signatures from independent witnesses, recording videos and taking photos. To be sure of the distance covered and the time taken, as well as to collect other data such as average speed, the car was equipped with a tracker.

In addition, the car had to be a strictly standard model without any modifications, not even with over-inflated tyres, and every time it was refuelled, the tank had to be filled to the maximum.

Obviously, to achieve such an average, the two Honda engineers drove in a very relaxed manner "anticipating the road conditions and without abrupt acceleration and braking". In other words, although the record is real and it is possible to replicate it with a similar model, the way of driving influences a lot.

Obviously, Honda owes a lot to the hypermiling skills of its engineers for achieving the record. Even so, it's still quite a feat for a 120 hp break to get under 3 l/100 km on the road on a real average and not obtained on a test bench.


Borgward BX 7, it's official and it's as peculiar as it gets. ❯

Honda to unveil hybrid and electric plans in Frankfurt

Holden Commodore, another victim of globalisation