On the trail of the "Cannonball". 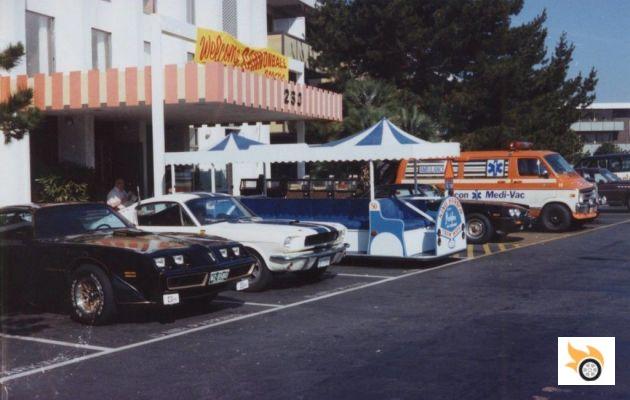 Now, some Germans are trying to make a documentary about the real Cannonball race, and they are looking for any kind of testimony in photographs, people to interview, 8 mm films, anything that will help to reconstruct those crazy trips from coast to coast.

By the end of the decade it was already vox populi, because the participants were attracting attention wherever they went. Two films appeared in theaters, one in 1976 with David Carradine, and another in 1981 with Burt Reynolds. They were pretty funny movies, but who can forget that black Lamborghini Countach trolling the state police... That's the memory that has stayed with many of us, but how interesting it would be to know the reality of the Cannonball, now that crimes are more than prescribed.

By the way, the Dodge Sportsman ambulance driven by Burt Reynolds in the 1981 movie participated in the 1979 edition of the actual race. The excuse to the police was the same, an urgent transfer of a patient affected by lung disease who could not fly by medical prescription ... and so they were tearing the stickers to the staff. At that time many things accepted as normal would be tremendously politically incorrect nowadays. Even ambulance drivers don't have their asses safe from speed cameras anymore, even if the life of the person behind them is hanging by a thread.

add a comment of On the trail of the "Cannonball".