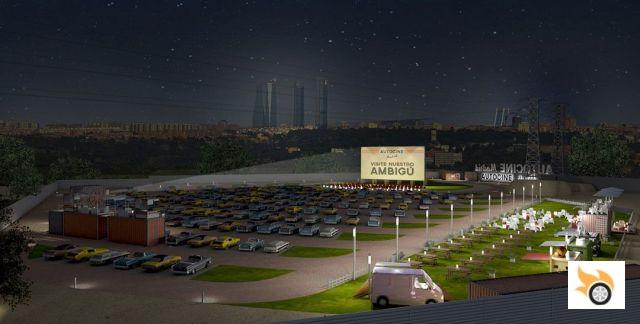 The first film to be screened will be "Grease", which although we will have seen it many times on television, in a drive-in cinema surely many of us have not. The price is free per vehicle, you pay per person, and the prices are similar to those of a conventional cinema, from 3 euros + 0.50 management. If you compare it with the price of a cinema ticket in the capital, it is even cheap. Its official name is Autocine Madrid RACE and has 27,000 square meters of extension, with a screen of 250 m² and 2K resolution (digital projection). The sound of the projection will not bother anyone, as it is broadcast by FM to be picked up by the radio that every modern car has. In some models this can be inconvenient because of the energy saving, warning.

As in American drive-in movie theaters, there will be a restaurant area with the well-known food trucks and terrace, where there are loudspeakers to keep up with the action. It could be an interesting plan when the weather is better, although the organizers say they will be open all year round. On the 3rd of March Grease will no longer be screened and "Logan" will be shown. The premieres will be combined with other old, but popular, films, one week on the bill and a single screening from Monday to Sunday. Tickets can be purchased in advance online.

Without wishing to advertise, allow me this comment: it is a brave initiative and certainly different from the typical plan to go to the movies. Besides, you don't have to go anywhere, it's in a very central area and you don't have to add to your bills the cost of parking, nor do you have to worry about whether the free parking time in a shopping centre expires.


In Spain, the drive-ins in Valencia, Denia, Alicante, Gijón, Ribadesella, Torrelavega and Getxo survive. Therefore, it is the closest drive-in cinema for millions of people who live at a distance of one to two hours by car from the capital.

add a comment of Imminent opening of the largest drive-in cinema in Spain, located in Madrid