What does the future hold for the Lexus CT 200h?

Too much or too little? Considering that the Audi A3 is leading with almost 200,000 units a year, the BMW 1 Series is around 130,000 units, and the Mercedes-Benz A-Class is at 120,000 units, the result is a joke. Even the Alfa Romeo Giulietta sells four times as many, and I'm not saying that because it's a bad car, but because of the unjust bad reputation the Italian car carries, as if on every corner there's a Giulietta calling for a tow truck.

Why has the Lexus CT 200h taken such a pitiful slice of the premium market? Well, I think there are a few factors working against it. For one thing, in Europe the C-segment is heavily dieselised, and the CT was never meant to be a petrolhead. On the other hand, the actual fuel consumption of the CT 200h is not that impressive compared to an A3 2.0 TDI, a 118d or an A 200 CDI. The fact that it costs less money to maintain and is more reliable doesn't seem to enter into the collective mindset. Well, we should qualify... its "real" rivals are the A3 1.6 TDI, 116d and A 180 CDI, with less power, but very even performance. Access engines, well...

Only one version has been offered, there was a risk of cannibalizing sales to the IS with things like "CT 300h" (and was registered name).

This car has taken a design risk in a segment where risks don't always work out well, as with the Lancia Delta (the only one that sells worse), but they can also work out well: PSA sells almost two DS 4s for every CT 200h. We're talking about a compact with generalist compact suspension, fixed rear windows and other strange solutions in a market where the Germans always win. But it has its niche. 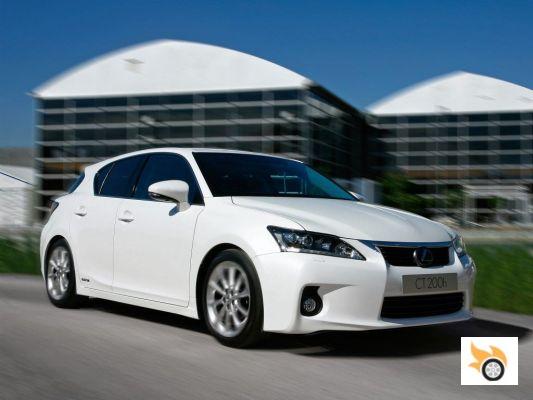 To make it more premium, Lexus put an independent rear suspension that makes the CT 200h a very noble compact and poised, but that takes away space in the trunk. In fact, it is one of its weak points, 275 liters without counting the double bottom, or 375 liters with irregular shapes and little usable. The rear seats are not that stand out in capacity. And it's not that young people like it very much, how many CT 200h have you seen with someone under 35 at the wheel? Surely less than those who have A3, 1 Series or A-Class.

The price positioning didn't help either, initially they went too far off the mark. The "basic" cost 28,850 euros, the intermediate 29,950 and the "pata negra" 35,000 bucks, that's in Spain. Not even lowering it by almost 5,000 euros achieved the desired effect. It's a very good car, but for 30,000 euros you can get a good D-segment car with a good engine, although lately that's not so true. Now there are those who sell for that price a vibrating three-cylinder, and this time I don't want to look at anyone.

The equipment, very closed and with hardly any optional, so you can not fight in conditions with who can double the price of the car based on extras.

The life cycle of this model comes to an end in 2018, and then what?

If Lexus wants to be a notorious brand in Europe, it has to dominate the compact segment. Sorry, when I said dominate, I meant "be relevant", and be a brand that can't miss in any betting pool. It needs a replacement, it's good, but it has to be better. Based on the TNGA platform, with more space, a more attractive design and the efficiency of the new Prius, it would gain a lot. But maybe the solution is to raise the body a few centimeters, which is what "puts" the European customer. The NX sells much better and is much more expensive, and is also easier to see on the street. Maybe we'll end up seeing a Lexus CX, or whatever it's called, and it will stop fighting with the "traditional" compacts, in Autocar they take it for granted, but I don't think so.


Sometimes it's not enough to have a good car to sell well. It's a good example.

What is wireless electric car charging and how does it work? ❯

add a comment of What does the future hold for the Lexus CT 200h?