How to get started in the LEGO world

LEGO is a manufacturer of plastic toys, but one of the most sought after in the world. Not only do they sell toys for small children, but their parents also buy them, either because they were children once, or because they want to be children again with the excuse of their children. This hobby can easily be compared to owning cars: it can become a well where we will not stop dropping money.

These toys have reached an enormous popularity, and in fact, there is an interesting buying/selling market in which we can see how they are paid (and asked) real beasts for ABS plastic parts. It must also be said that these parts are so well built that, even if they are 30 or 40 years old, they fit perfectly with each other, or with brand new parts. Tolerance margins of thousandths of a millimeter are used, to avoid that the constructions are flimsy, or that the pieces cannot be separated. It is a toy made to last. 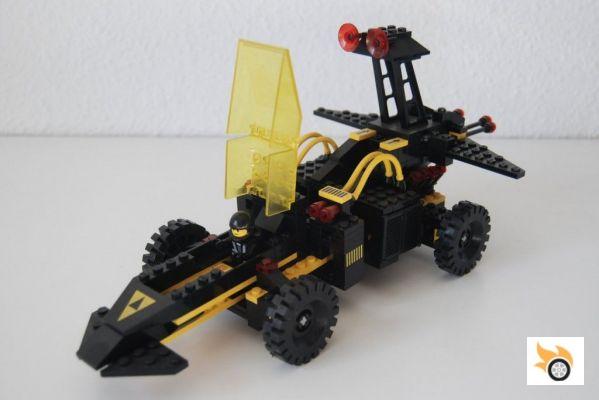 There are two basic ways to play with LEGO. The first is to follow the instruction manual and complete the different phases until a vehicle, building or any other object is finished. The difficulty ranges from games for kindergarteners to teenagers. On a higher scale there are those who take a handful of pieces and make their own creations. The possibilities are virtually endless.

It's a fascinating world because of the number of pieces and their different functions, some allow elastic flexibility, basic mechanisms, vehicles that move by themselves and even robots with a very strong complexity. If we want to compare it to a video game, it would be like a sandbox (Grand Theft Auto type): there are so many possibilities that only the imagination sets the limits.


The most complicated boxes, from Technics, have gears, mechanisms, pulleys... they can even work with electric motors and batteries. They take up more space and have a remarkable level of detail. They are recommended for children 16 years and older, but a younger child, if he is clever, can finish them quickly. The limit is in the sense, some pieces are too small for the little ones. Swallowing a piece of Duplo is difficult even for Chicote, but a piece of 1×1? 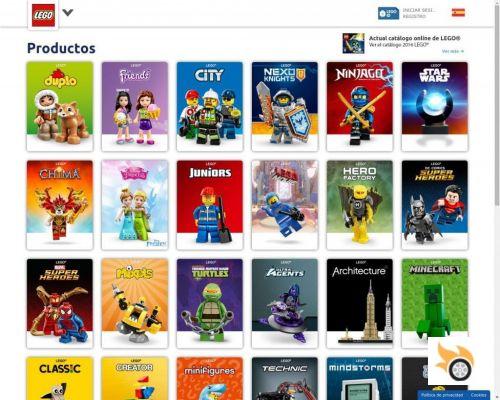 Not expensive. The following

LEGO are very expensive toys, just look at the prices in a toy store and you'll look like you've seen Elvis dancing. If we go to another toy store, the same thing. Someone who is not familiar with this world will think that there are mistakes in the prices, that there is a comma one or two decimal places off, that it can't be that a plastic toy costs 500 euros. Company policy, LEGO toys are not sold cheaply.

LEGO started making wooden toys and switched to plastic more than 50 years ago.

And second hand? It can be even worse. These toys work in the same way as the exotic car market, used cars can cost more than new. If, on top of that, they are several years old, and are unsealed boxes, with the bags of virgin parts, you can see prices above 1,000 euros per box, and also exceed 10,000. In collecting it's pure and simple supply and demand: who really wants to get the box he is longing for, will have to loosen his wallet a lot.


You can also see sky-high prices for boxes with missing parts, instruction manuals or the packaging itself. Whatever, prices can still be absurdly high. These are obviously not prices for kids, they are prices for big kids who can afford luxuries. The only way to get a very cheap LEGO is to buy it from someone who doesn't know the price of what they have.

If we talk about limited edition boxes related to media phenomena such as Star Wars, Harry Potter or similar, the madness increases. There are people who make money investing in LEGO and then selling them, without ever opening the boxes or enjoying them. Its revaluation exceeds in profitability to indexes like the NYSE American, and it is a much safer investment. Despite consoles, tablets, mobile phones and other digital entertainment, LEGO is still an object of desire that does not lose value. I leave you an example in Brick-Link, it's scary.

There are collections and collections. There are city sagas (LEGO City), medieval, thematic, advanced (Technics), outer space... Depending on the era and its state they are more or less accessible. If you buy old boxes, you have to be minimally concerned about their condition. The pieces only show a visual deterioration due to exposure to sunlight, becoming more yellowish. Fortunately, this is reversible.

As in all collecting, the integrity, packaging, instruction manual, etc. are highly valued. But the pieces still fit perfectly. With respect to other toys like Scalextric (or any other slot), require little maintenance, and the passage of time is much less noticeable. If the LEGO are kept out of direct sunlight, they can last as long as you want... decades. 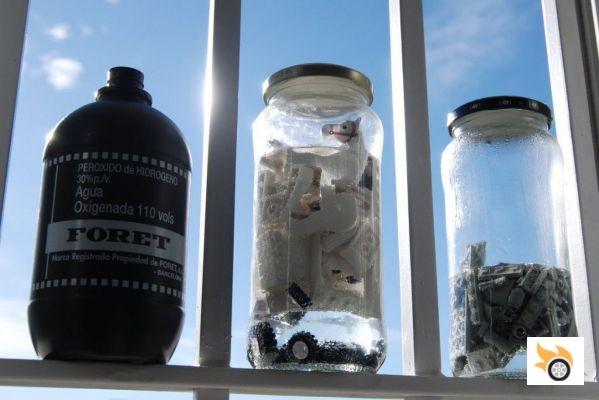 I am one of those lucky ones who has kept my LEGOs from childhood to my current age. If they had ended up in the trash, or if I had sold them off, I would be pulling my hair out like Antonio Lobato. Right now I couldn't afford to buy back my collection, it's worth more than my car! And I would regret it for the rest of my life... LEGO, in a way, always brings out our inner child; I can't deny the obvious.

To combat yellowing of the pieces, just soak or treat them with hydrogen peroxide (H2O2) - hydrogen peroxide - 110 volumes (30% concentration) and expose the solution to sunlight, a free source of ultraviolet rays. They are as good as new again, any other cleaning product will not achieve the same result. The bottles are purchased in pharmacies or companies that supply hairdressers, they are black and are vacuum sealed. Conventional hydrogen peroxide has a much lower concentration, 10 volumens or 3%. By the way, in contact with air it ends up being ordinary water (H2O), and it is very expensive: 4.75 euros per 500 ml.

Unlike a car, we will not get greasy hands, but it is a process that must be done carefully. The hydrogen peroxide at such a high concentration emanates toxic and irritating fumes, you have to handle everything with gloves and in a well ventilated place, if we do not want to oppose a domestic accident. Logically none of this is within the reach of a child, nor should it be. This procedure is valid for any ABS plastic that has yellowed, such as electronic product casings.

Consulting LEGO on the Internet is very dangerous

There are websites that have complete catalogs year by year, with the complete list of parts needed, and even scanned instruction manuals. Each reference has a numerical identifier with which they can be found anywhere in the world, for example LEGO 5580. What's more, each individual part also has a reference number, so it is possible to find that very specific part that we have lost or has broken (usually our fault).

If we get into collecting sites, eBay or similar, we can end up after years like the protagonists of Trainspotting, but changing the heroine for LEGO pieces. We'll have sold our car, our partner will have left us, we'll have been sacked because we're still assembling kits at home and we won't eat for days because we've spent our savings on pieces. OK, I've exaggerated a bit, but if you don't set yourself a limit, you can end up like this.

Children, in their blessed innocence, don't know any of this. It will take years for them to know how much it costs to buy the boxes - I understand my parents much better now - and to value what they have. If they are inoculated with the virus in time, as happens with tuning, they won't have money to spend on joints, booze or tobacco when they grow up. Or yes, one day they may see it as a simple toy and pass on their LEGOs. It will be the opportunity of someone who gives it a higher value, and has the money. 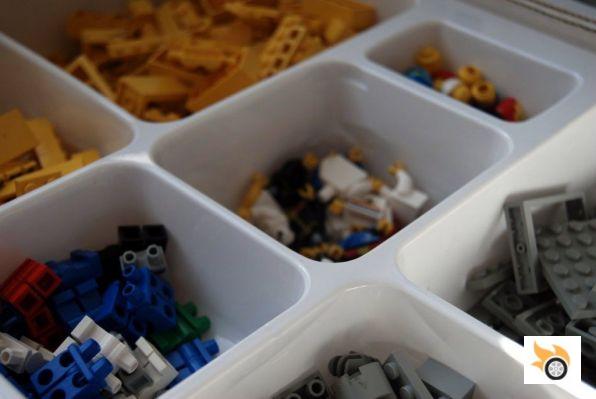 The initiated will have small constructions, which will fit in a glass or methacrylate display case. The most geeky will need a measurable surface in square meters to display all their constructions, and with a certain level of ambience: it's the same with Warhammer or model railways. Unlike digital entertainment, hoarding LEGO involves not only money, but also physical space. That's the thing about "analog" toys.

LEGO has a business model that has survived with great dignity the economic crisis on the one hand, and the digitalization of the kids on the other. If it wasn't for the interest shown by adults (or big kids) their model would probably have gone bankrupt. They are not toys made in China by any means, they are mainly manufactured in Europe, and with a level of quality and industrial precision that the automotive sector would like for itself.

I could go on and on about LEGO until doomsday, but this article is a mere approximation of a tremendous vice. Do you have any LEGO? Feel lucky, and if it's in storage, open it. If you consider yourself too old for this sort of thing, sell it, you'll make someone happy, and you'll make some good money while you're at it. This is much more than a toy, it's a ticket back to childhood, and that experience is well worth the money. Whoever knows this, has understood me perfectly. 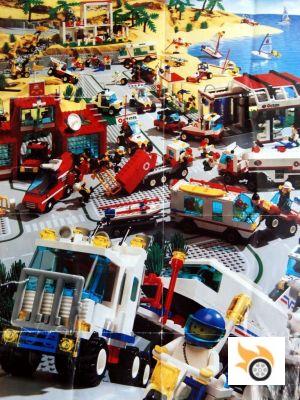 How to import a vehicle into Spain from the European Union ❯