It is in 1982 that appears for the first time in the range of the German manufacturer a "compact" sedan, according to the terminology of the brand. And it is that the W201, as it is known internally, is the smallest car to date of the brand of the star.

One of the brand's most familiar and timeless silhouettes, the 190E.

When it arrives on the market, this model becomes the third in a range consisting of intermediate models and those of the S-Class. The range of the early 80s Mercedes is still composed of established models, such as the famous and indestructible W123 or the S-Class (W126) at the top of the range, models developed in the 70s. The 190E is not only a commercial revolution for Mercedes, enters an unknown segment where reigns in absolute master the BMW 3 Series, but announces the color of the Mercedes range that will come later, as the E-Class (W124) or the SL Roadster (R129). More importantly, it has laid the foundations of what was the compact Mercedes, ie the C-Class, and the articulation of the entire Mercedes range, with the introduction of the E-Class. 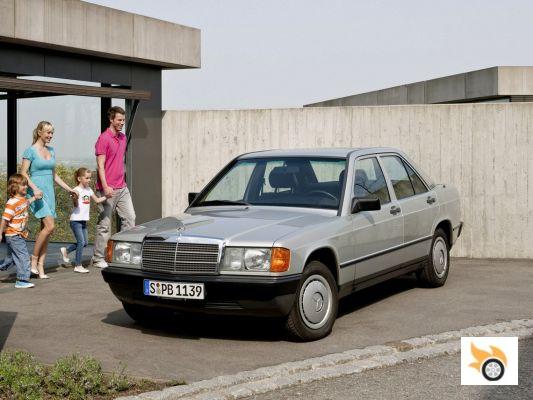 30 years after its launch, the W201 class saloons continue to demonstrate classic lines, they are out of time; they are clear, strong and exude a kind of timeless modernity. Although it is true that for our times they are excessively taut. The influence of the 80s had to be felt in some way. Technically, the 190 was also innovative. For example, the rear suspensions are multilink, five-link independent suspensions.

The five-link multilink axle of the 190E, an innovation in the early 1980s.

The W201 was designed under the direction of Bruno Sacco, and is the first car to embody his entire design philosophy and vision. In 1975, Bruno Sacco succeeded Friederich Geiger as head of the brand's styling department. From then on, his importance is paramount in the modelling of the entire Mercedes-Benz range, leaving his mark on such emblematic and important models as the C-111-III diesel of the 1978 speed record or the S-Class (W126) of 1979. In 1978, Bruno Sacco is appointed head of the design department. He now directs all Mercedes-Benz design, both interior and exterior. 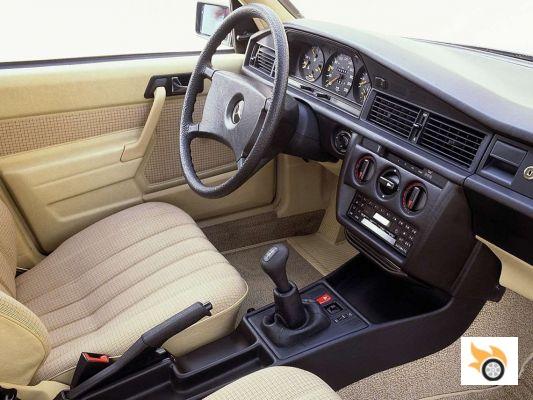 In 1980, the Mercedes-Benz design department presented a series of guidelines and patterns on the day of "German Design" for good car design (applicable to many other products). And like all great designers, Bruno Sacco is a visionary. This is something he transmits to his designers, he forces them to think about the future. Most designers conceive cars five or ten years ahead, but Bruno Sacco increased that time span to three decades. "The development time for a car is generally three to five years," Sacco explained. "It's followed by a period of eight years where the car is mass produced. The last car that comes off the assembly line can have a life expectancy of 20 years. In between, the model will have lived about 30 years." Based on this premise, Bruno Sacco's aim is to make his design timeless. 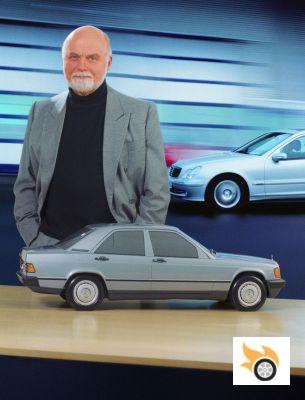 Bruno Sacco next to a model of the 190E.

His design philosophy was also that "a Mercedes-Benz should always look like a Mercedes-Benz, regardless of its era". Moreover, Bruno Sacco never put design before technology. As an engineer he was well aware that a good design cannot hide a technically poor car. For him, design and technology are of equal importance and must be on an equal footing.

As an engineer he was well aware that a good design cannot hide a technically poor car. For him, design and technology are of equal importance.

Another of his theories that marked design in general was that of "the affinity between horizontal and vertical lines", which described the homogeneity of Mercedes-Benz designs. The "horizontal affinity" refers to the features common to all Mercedes-Benz models, something that unites them within a large family; it is what we know as brand image. The vertical affinity must be part of a certain continuity, so that the model that is replaced does not age several decades all at once. Bruno Sacco knew that this was very important for Mercedes-Benz, as the brand's cars had a reputation for reliability and longevity that the design of a new model should not destroy. It is true that it took him a while to immediately understand the idiosyncrasies of Mercedes-Benz, but in the end he understood and quoted Gottlieb Daimler himself: "Nothing but the best".

With Bruno Sacco, Mercedes-Benz also understood that design was one of the key ingredients in a car's recipe for success. As more and more cars become similar to each other on a technical level - he said it in the mid 80's... -, what makes the difference is their style and character. The Mercedes 190E is a clear example of his theories, is his statement of intent. He knew how to interpret in a compact key all the aesthetic values of the brand, as well as the technical qualities of Mercedes. According to Sacco himself, "S-Class aside, the 190E was the perfect example of how to combine innovation and tradition. The 190E was the vehicle that convinced the people at Mercedes that they were able to change and adapt to circumstances". At the same time, the W201 marked the beginning, in Mercedes, of the clear differentiation of the segments in which the brand operated; the famous C, E, S Class and all those we have now. 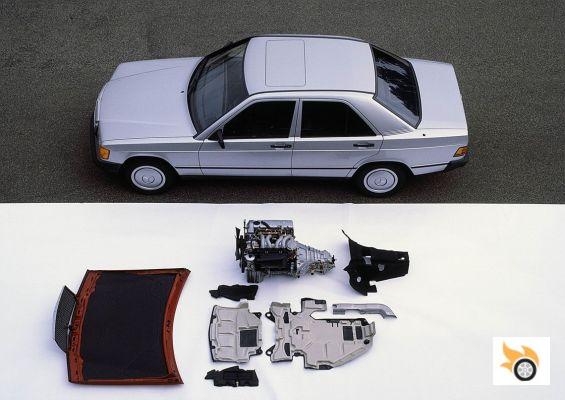 Acoustic insulation was key in the refinement of the 190D.

The 190 and 190E, the first two models to hit the market, equipped modest gasoline engines, 109 and 122 hp, respectively. In autumn 1983, Mercedes introduced the 190D. With a modest power of 72 hp, this four-cylinder consumed very little and, above all, was very quiet for the time. It was a car that delighted trade representatives and executives; it was a car designed for company fleets. But the one that catches our attention is the 190E 2.3-16, whose engine with four valves per cylinder was a revolution for the time. As usual with Mercedes and many of its innovations, did not invent the multivalve cylinder head, but optimized the concept, made it reliable and ultimately popularized it. It developed 185 hp, reached 230 km/h and allowed Mercedes to take on the BMW M3 in the dealerships as well as on the DTM circuits. To support its launch, the 190E 2.3-16 set several world records in the summer of 1938 at the Nardò speed circuit in Italy. Some of these records include the longest distance covered with average speeds close to 250 km/h: 25,000 km; 25,000 miles and 50,000 km. 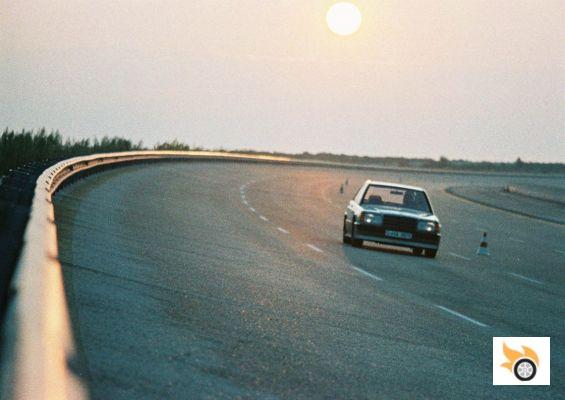 Over time, the 190 range was extended with the arrival of new versions, such as the 190 D 2.2 and 190E 2.3, designed specifically for the North American market. But there were also models for Europe. The 190D 2.5 equipped with a 90 hp five-cylinder block brought a semblance of performance to diesel drivers, while the 190E 2.6 offered the nobility and power of the 6-cylinder in a segment and range dominated by 4-cylinders.

The culmination of the sporty versions of the 190E came in 1988 with the introduction of the 190E 2.5-16 EVO I with 195 hp. This model responded to the same obligations as the BMW M3 E30, if they wanted to compete with a model, it had to be produced in series, even if it was limited to be homologated for the DTM. This first version was soon eclipsed by the 190E 2.5-16 EVO II of 1990. Yes, the one with the huge spoiler and the blade-collector at the front. 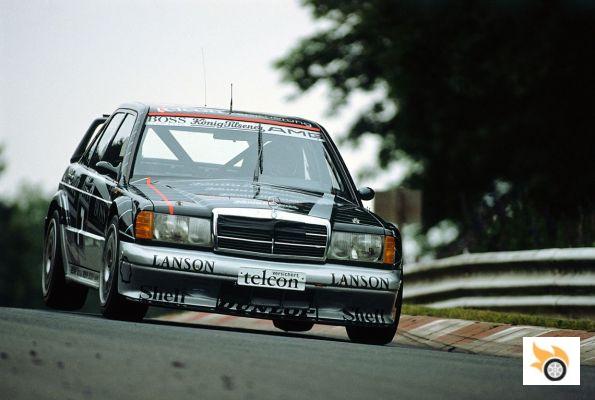 Of this model, like the EVO I, only 500 units were produced, just enough to be homologated in Group A of the DTM (although some sources claim there were 502). Extremely rare, it is said that initially only 5 units were sold in Spain. It developed 235 hp and could reach 250 km/h (155 mph). Chassis and aerodynamic elements were designed for competition. Even the tyres were of enormous dimensions for the time: 245/40 ZR 17. In competition they used up to 19 inch tyres... All these evolutions finally paid off in 1992, when Mercedes and driver Klaus Ludwig won the DTM title. It was the first championship title for Mercedes since the creation of the German touring car championship in 1984. 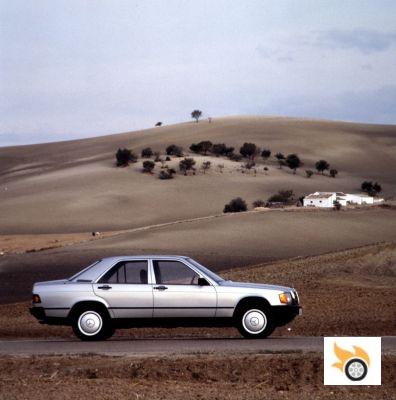 More than 10 years after its market launch, the Sindelfingen factory ceased production of the W201 in February 1993. The 190 continued to be produced for a few months until August at the Bremen plant, mainly for export. A total of 1,879,629 190s were produced. In May 1993, the successor to the W201, the C-Class (W202), was officially presented. The C-Class is still more than ever present in the Mercedes range, and is one of the primary models for the brand. And it was made possible by the 190E.

Electricity on board, from the alternator to the electric car (II)

The keys to the new Audi Q2

How do you prefer your sports car, with manual or automatic transmission?

Speed ​​record: the 5 most powerful hypercars ever

99%
We have been able to give 99% of times, the solutions that users were looking for when consulting our page.