According to the NEDC homologation, it is capable of 400 kilometers in mixed cycle, but there must be very favorable conditions, such as having dinner with Angelina Jolie and she pays the bill. In a more realistic use we are talking about 300 kilometers of range without doing strange things, and from Renault admit that it can go down to 200 kilometers in difficult conditions (very cold, highway at 120 km / h or more, improper use of the brake ...) It will be half, but it is already a very decent range! By the way, Renault has made it clear that it does not buy cobalt for its batteries from countries in conflict.

Right now, and until the Opel Ampera-e arrives, the ZOE is the generalist electric car with the longest range on the market, and is even competitive with the BMW i3 REX with 33 kWh batteries (using gasoline and with limited performance). We checked it in a very varied route along the Community of Madrid, with all kinds of roads, trying to achieve a distance + remaining range that added up to 300 km. But we did it in a different way, driving as if the range didn't matter, as it was going to be enough. In other words, I simulated a totally realistic driving, not oriented to maximize the load. My presentation partner did the same.

All images are of ZOE in Intens (intermediate) trim level.

The Renault ZOE z.e. 40 is distinguished from any other ZOE simply by a badge on the back. There's no way to tell it has more capacity besides looking at the number plate, as the first units have no more than 22 kWh. The rest of the car is exactly the same, although it is a bit heavier, 15 kg heavier according to the manufacturer. The secret is in the internal structure of the cells, which has been optimized while maintaining the volume, so more kWh fit in the same space. It maintains 192 cells divided into 12 modules. According to Renault, performance, reliability and passive safety are maintained.


It is powered by the R90/Q90 engine (formerly known as R240), which is entirely Renault and not from an external supplier, and achieves 30 km of range compared to the original Continental engine. It delivers 225 Nm up to 3,000 rpm and 92 hp between 3,000 and 5,000 rpm. The latter should not worry us because there is no "gearbox", it is a fixed ratio with reduction, nor is there a rev counter. In fact, the instrumentation is 100% digital. In addition to the speed and data from the on-board computer, it indicates our energy use graphically. There are three modes of representation, which alternate with a button in the upper right corner.

I find the gear knob too bulky for its real purpose.

For regular commuting, and in the spirit of maximizing the charge, the ECO button limits the speed to 90 km/h. This is perfect for those who regularly drive on the M-30 or inside the M-40 in Madrid. If more speed is needed, just press the accelerator pedal fully down, as if you were using the cruise control. The button that toggles between the limiter and the cruise control is just as badly placed as in the Clio, next to the gearshift.

Driving the ZOE gives the same sensation as any electric car: uninterrupted and linear acceleration, very intense below 90 km/h - it does 0-50 km/h in 4 seconds - and then sluggish, very quiet and very pleasant. At low speed it emits a very faint sound that warns pedestrians of the car's presence, but it sounds like the future. In addition, the electric motor is not 100% silent, it has a very characteristic sound when accelerating. The noise of a conventional car is not missed, and if that's the case, the R-Link can emulate the sound of several cars and a motorcycle, although it's all very artificial.


In the specific case of the ZOE, a slightly higher driving position is noticeable, as the passengers literally sit on top of the batteries, which are located under the floor. On the other hand, the dashboard reflects a lot of light, as you can see in the picture, for people who, like me, are very sensitive to light, it can be a bit uncomfortable. The qualities and finishes are similar to those of the Clio, although this one will age better, the engine doesn't transmit any vibration, nor will it get worse with time.

The suspension is comfortable, I would say in all circumstances. At typical highway speeds there is an aerodynamic hiss at the B-pillar that goes unnoticed if the stereo is on. In general, the car feels more comfortable between 90 and 120 km / h for sound, power consumption and so on. It can go up to 135 km / h, it is limited from the factory. I think we will all agree that it is a more than acceptable trot, in the electric high speed devours batteries and collapses autonomy. 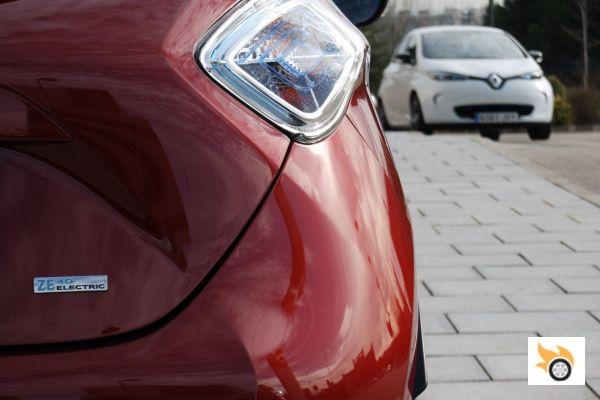 The test route included two stops, in which Renault staff did not make any recharging. The sum of autonomy and travel did not exceed 300 kilometers at any time, but did not fall below 260 kilometers total. It must be said in defense of the car that an outside temperature of about 5 degrees is not exactly the most optimal for charging to the maximum, then the useful capacity was less than 41 kWh.


According to Renault, the batteries are "conditioned" and operate between 15 and 28 degrees in "all circumstances". Experience in Nordic countries has helped engineers optimize the batteries to work in very cold or very hot weather, as that greatly affects their performance. On a day like this it was not an option to turn off the air conditioning, which remained in automatic mode at 22 degrees, and part of the journey was not necessary because there was enough sunlight.

The ZOE has a quiet ride, but it feels settled in the curves as it has a lot of weight in a low area, then its center of gravity is lower. A car with higher suspension, like the Captur, doesn't offer the same sensation as it has a higher centre of gravity. It's physics, gentlemen. It would be a very pleasant car to travel in if it weren't for the thick front seats, which limit the habitability of the rear seats in terms of knee room. If someone very tall is in the front, it's going to be noticed in the back. 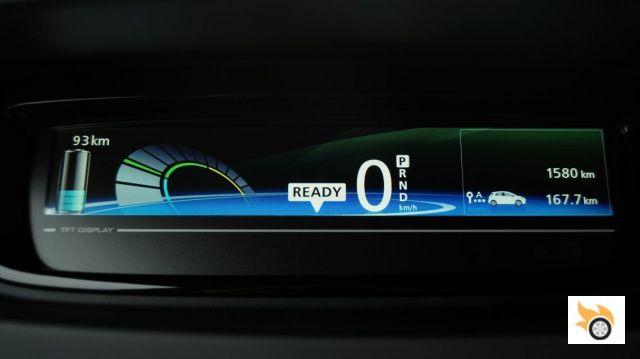 Back at the Renault Spain headquarters we had completed between me and another driver 167 kilometers, with additional range for another 93 km. The press guys said that it was a very good record, although we were not looking for a low fuel consumption. Something has to be noticed in the habit of driving a hybrid, because 4 kWh were regenerated taking good advantage of the inertias, but, I insist, at completely normal speeds. The average speed of 50 km/h is low, as most of the trip was on local roads and towns. Consumption was 15.4 kWh/100 km, which is quite normal for an electric car that is driven without "consideration".

What's more, we spent a total of 25 kWh, so, if we were to spin a little thin, we could have managed to cover that distance with the 22 kWh ZOE. Without going over 90 km/h and limiting the use of the air conditioning a bit, it's perfectly possible. Renault relegates the lower capacity batteries to the basic model, the Entry, from 16,625 euros (rental batteries) or 24,125 euros (owned batteries).

Renault calculates that, considering all costs, the ZOE comes out 20% cheaper per kilometer than a Clio.

That's another, Renault already allows you to buy the batteries and go from renting. That comes at a price, 7,500 euros for 22 kWh. The 41 kWh model starts at 19,125 euros (rental) or 26,625 euros (ownership), with the same equipment. Here the price difference is the same, 7,500 euros. The rental varies depending on the mileage, although there is a mode of 119 euros per month in which you can do all the kilometers you want. It is also possible to change the batteries and put the higher capacity ones in a used ZOE, 3,500 euros is worth the operation, and half a day in time. Whether it's worth it or not, it's up to each one.

A look at the immediate future of the ZOE: more connectivity

The manufacturer is finalizing 100% useful technologies for this model, which can make life much easier for its owners, thanks to Internet connectivity:

In electric cars connectivity is especially useful, because it allows to know the state of charge, for example: "available autonomy for 100 kilometers, remaining recharge time 3 hours and 15 minutes". Since the buyer of an electric car is usually an informed and tech-savvy person, these functionalities are very convenient and have a high potential for use. 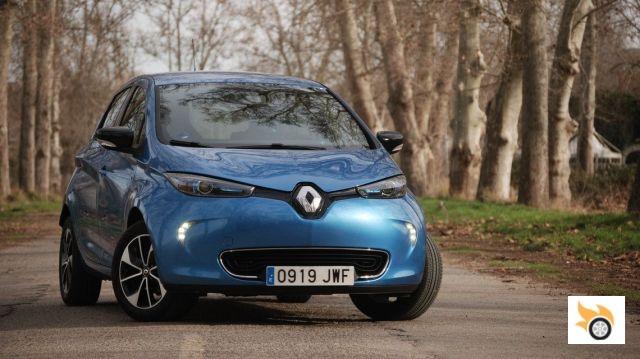 The ZOE range in Spain

The Entry and Life only have two rear headrests and the third is not available.

With the 41 kWh batteries we have the Life, which has exactly the same equipment as the Entry. The Intens has more things (like the one in the pictures), like light and rain sensors, 16″ wheels, electric rear windows, rear parking sensor, hands-free access and start card, and more optional equipment (17″ wheels, central headrest, rear parking camera...). The Intens can be charged at 43 kW of power, i.e. in half the time with a fast charge point.

The top of the range is the BOSE, with heated leather seats, rear view camera, a slightly more detailed interior, bespoke acoustic installation by BOSE, third rear headrest and, optionally, the 17″ wheels. You can also opt for an additional colour, Rhodium Grey. In France it will be known as Edition One. Whatever it's called, it's a limited series. 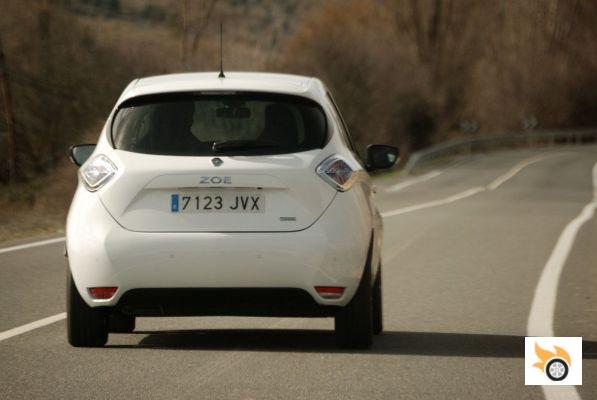 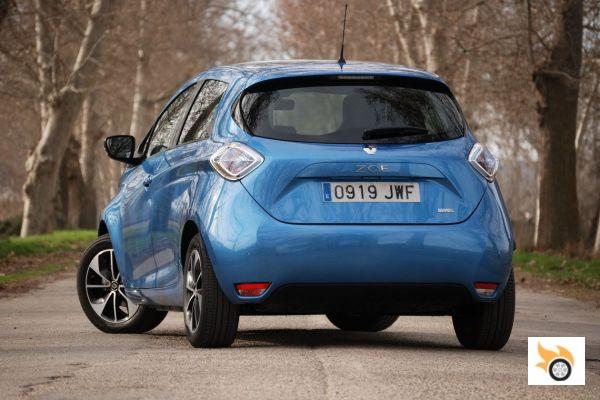 If there are more questions, I will answer them in the comments, but these are the most typical ones.