Mazda RX-01 Concept, a precedent for the Miata with rotary engine

But the people at Mazda aren't giving up, and a small team of engineers is still working on its development, on a new generation that could be called SKYACTIV-R... but let's look at the history of the curious RX-01 Concept, and then we'll go back to the future of the rotary engine...

The third generation of the RX-7 was introduced in 1992 - it would be produced until 2002 - and was reasonably successful, but the RX-7 had been growing with each generation, in performance, in size, and also in price... The fact is that someone at Mazda should be wondering if the fourth generation of the RX-7 should not return to the origins, and be lighter and simpler ("back to basics" as the English say) and so they presented the RX-01 in March 1996 at the Tokyo Motor Show, a prototype smaller and lighter than the third generation RX-7, which would still be produced for six more years.

The concept was intended to return to the basic idea of the first RX-7, that is: to offer a light, fun-to-drive car at a more affordable price, a philosophy dear to the Hiroshima-based brand's heart.

Very compact, the RX-01 was only 4,055 mm long (little more than the length of an MX-5) and in such little space it managed to offer a cabin with 2+2 seats -by the way, the rear seats were almost unusable- and that with the small rotary engine placed behind the front axle. The reduced weight of the Wankel engine and its conception allowed to achieve a low weight of only 1,100 kg, a mass that was also perfectly distributed between its two axles, and very centered, which promised a fantastic agility. In short, the MX-5 coupe and rotary with which many pistonudos have been dreaming of...


Its design and styling were quite interesting. First of all, and thanks to the compactness of the engine and its position so far back, it was possible to design a certainly original front, very low, and with a spoiler integrated in its upper part, which sought to create dynamic load on the front axle. The very narrow front light clusters were ahead of their time (then came the fashion for huge headlights) and its rear, with light clusters inspired by those of the third generation RX-7 also provided some interesting ideas, such as an original rear pillar vaguely reminiscent of the humps of some racing cars.

Finally the concept was discarded, and the successor to the RX-7 was the RX-8, a 2+2 door coupe with four comfortable seats and a clearly more GT philosophy, but the 13b-MSP (Renesis) engine that equipped the RX-01 would go on to the series, occupying the engine bay of the RX-8. This would be -or not- the last Mazda rotary engine, and the last mounted in a production car, disappearing in 2012, when the RX-8 was discontinued, an engine that found no replacement due to difficulties in meeting the new environmental regulations, Euro 5 in the European case, in Japan endured a little longer. 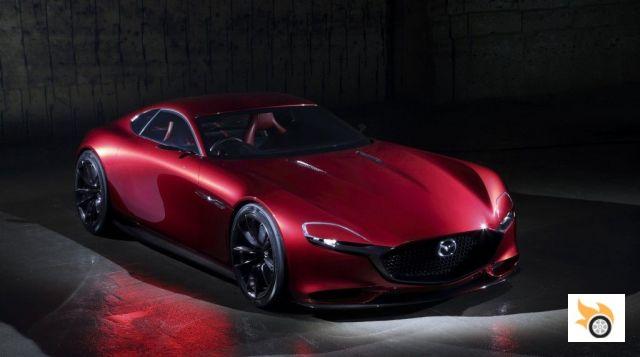 Does the rotary engine have a future?

As I said above, Mazda is still working on the development of the rotary engine, and there are a couple of tests: In 2015, Mazda presented the RX-Vision Concept, a spectacular prototype that - in addition to showing the aesthetic evolution of the brand's design language. It equipped a rotary engine, on the other hand, in March 2016, the Japanese brand presented in the US the patent 2016/0084158 for a new evolution of its rotary engine.


It seems difficult, very difficult, but if we dream, maybe Mazda engineers will find a way to make the rotary engine meet future environmental standards, and as dreaming is free, I will continue dreaming of an improbable RX-5 coupe, small, light, rotary, and very, very fun...But you have to be realistic, and Mazda -as well as being creative and stubborn-, they are, so they are working on the revolutionary new generation of SKYACTIV-G 2 petrol engines, engines with 18:1 compression ratio engines that promise exceptional energy efficiency, a performance that will translate into very low fuel consumption and emissions. A really interesting project, which you can learn more about in the interesting article that Guille wrote.


As far as the MX-5 is concerned, and although its sales are anecdotal -for the total volume of the brand-, I hope Mazda goes ahead with the development of the small roadster. There are many of us who wouldn't understand Mazda without the MX-5, a car that takes its motto "Jinba Ittai" (driver and rider united as one) to the maximum expression. That's why I sometimes wonder what the next generation of the Japanese roadster will be powered by... and I think it will depend in part on how and when combustion vehicles will be limited or banned in urban areas.

Will we see a plug-in hybrid MX-5, will it be equipped with a rotary engine-generator, will it be fully electric? We don't really care as long as it's short, light, convertible, and as delightful to drive as it's always been.

add a comment of Mazda RX-01 Concept, a precedent for the Miata with rotary engine