Follow PSA's example: we want to know the real fuel consumption and emissions.

The homologations are made as the regulation says, in laboratory, equal conditions, roller bench and a requirement alien to any realism. Nobody drives like in the NEDC measurement cycle, cities would collapse with the slow accelerations that have been foreseen in the protocol. It is precisely the homologating character - equal conditions - the burning nail to which manufacturers have clung, saying that with another system you can not have an objective criterion for comparison, especially if the conditions are not exactly the same.

In less than a year, PSA has published the results for more than 1,000 models and variants of the Citroën, DS and Peugeot brands, which can be viewed on the following websites:

The figures given can be fine-tuned to take into account driving style, number of occupants, whether speed limits are observed, etc. The manufacturers are right that a personalised figure cannot be given for everyone, but there are ways to give an approximate figure that is much closer than the homologation figures. 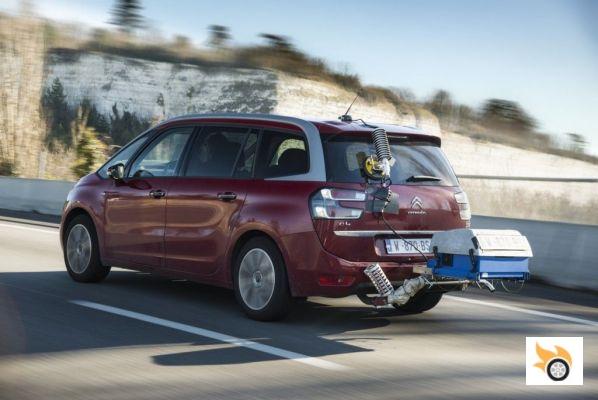 So what are the other manufacturers waiting for to do the same?

Easy answer: they will wait until it becomes mandatory, i.e. the new WLTP protocol is required, and then the cars will go out on the road to get their fuel consumption and emissions approved. In the meantime, we depend on their goodwill. We know from Volkswagen CEO Matthias Müller that the German manufacturers' association VDA is negotiating how to do it, but consensus is lacking. If the Germans take the step, others will follow suit, as happened in the past with the EuroNCAP ratings.

In this way, European consumers could know much more precisely how much their future new car is going to consume - as the data will be collected for models currently on sale - and thus get their purchase more right. Who hasn't heard of someone unhappy because they feel unable to reach the homologation figures for their car? In 2001 this was very easy, the average deviation (homologation vs. reality) of the industry was 8%, nowadays it is well over 40%. And what is the reason for this difference? It has a lot to do with the fact that twisting the regulation and reinterpreting it can achieve much better results (for the manufacturer, of course).


Consumers would have to stand up and give the manufacturers a hard time on social networks to make them give us that information. We want to know how much their cars spend and how much they pollute - PSA will report actual NOx emissions this year - to know if it is worth buying them or go for the competition. In fact, there are brands that, although they don't have the lowest homologated consumption, they do have the lowest (or equal) real consumption.

The American three-cylinder gets 4.7 l/100 km of petrol, the Japanese four-cylinder 5.1 l/100 km. Actual average consumption is exactly the same: 6.7 l/100 km; I base this on figures published by Spritmonitor. Ford's tight mid-engine gets the same as the huge Japanese non-turbo, and both boast advanced technology. The logical thing to do, looking at the official figures, is to dismiss the Mazda as having a more gas-guzzling engine, but reality is fickle and we shouldn't let a twisted piece of data alter it.

Someday we'll find out the real consumption figures from the manufacturers themselves, even if it's only out of obligation. In the meantime, consumers can make their own way and consult alternative sources of data, such as Spritmonitor, Honest John, ADAC or Emission Analytics to find out about fuel consumption and pollution levels. The best thing is that it comes on the manufacturer's website and can be found quickly. In the case of PSA the location is not the most obvious (information on each model where it corresponds), but it can be found quickly.

Mind you, these kind of mini-consumption figures in ideal conditions aren't a bad habit for PSA, they've been doing it almost everywhere and for years. For example, the same models that Dieselgate has made so famous - the EA189 Common-rail TDIs - boasted record fuel consumption levels under the command of fuel efficiency experts like Gerhard Plattner. When you have that experience and a bit of luck, miracles can be achieved. But not with a full tank and for years on end. A minority of drivers have the patience and the mettle to achieve record figures on a daily basis, and those are the ones that Spritmonitor puts the others far behind in efficiency.


But it's about giving realistic figures to normal people, not about showing how far fuel economy can be lowered. As a human being, I think it's great that Usain Bolt is under 10 seconds in the 100m sprint, or that Mark Phelps is one of the best swimmers in history. In my species that's possible, I'll never achieve it in my fucking life, even if I train my ass off. I'm more interested in how much I can run or swim, not what the best with the best training and fitness can do.

The same with cars, we want to know!

Heel toe, a technique that is not only for "freaks". ❯

add a comment of Follow PSA's example: we want to know the real fuel consumption and emissions.