The difference of 2,500 euros is much more than a simple "repro" of the engine to get 20 hp more. The available colours: Ultimate red, Magnetic blue, Perla Nera black, Artense grey, Nacré white and Hurricane grey. The most powerful can opt for a two-tone paint job, half black car, half red car, which is as close as it will get to being a coupe, without being a coupe.

We have been able to test it briefly, but at the same time intensely, on the mythical track of the Jarama Circuit. A wet and very slippery asphalt is an additional challenge, where you can better appreciate the driver's sense of control. If the car is able to warn you early enough and inform you of what's happening, you can fine-tune your driving. 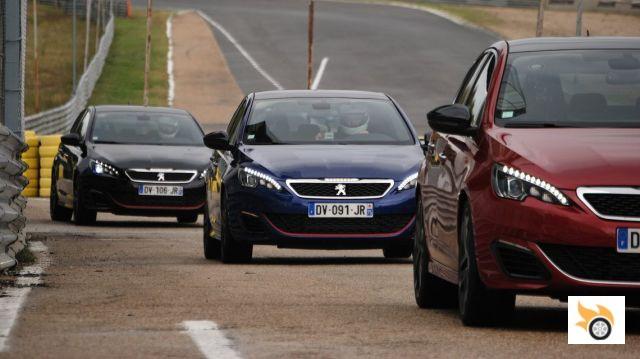 But before we get onto the track, let's take a look at what makes the 308 GTi a special car. There's no denying that it's a derivative of a generalist five-door compact, like so many other models, but the modifications on an inferior 308 are very noticeable to say the least. Physically it is more muscular, has widened tracks and a rear diffuser with double tubarro. The front lights are 100% LED, a detail to be taken into account.

The engine is the 1.6 Turbo, internally called EP6 FDTR, which is shared with other models like the 208. The modifications are significant, with Mahle pistons, reinforcements in piston rings, connecting rods, connecting rod bearings and connecting rod bolts. The steel exhaust manifold withstands 1,000 degrees, and where does it get so hot?

In both versions the turbocharger blows with a relative pressure of up to 2.5 bar, i.e. if we add the atmospheric pressure we get 3.5 bar absolute pressure. That explains the force with which it pushes when the throttle is at full throttle, it's a really intense feeling, and it doesn't let up quickly because the engine has a pretty solid delivery of torque: from 1,900 to 5,500 RPM it delivers up to 330 Nm. It cuts injection at 6,500 RPM, and with elegance.


The manual gearbox is reinforced to withstand the onslaught of the turbo engine. 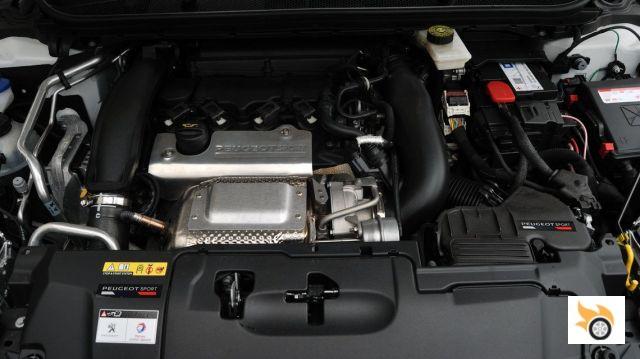 The 250 hp version accelerates from 0 to 100 km/h in 6.2 seconds, and the kilometre from standstill is completed in 25.6 seconds. The power-to-weight ratio is 4.82 bhp/kg, enough for insurance companies to consider it a very delicate - and dangerous - car, depending on who you're driving it for.

With 270 hp we are talking about 6 seconds for the same acceleration, and the kilometre is done in 23.5 seconds. In both cases the homologation is 6 l/100 km, because in the laboratory conditions in which this is measured the two engines are making a ridiculous effort and the different calibration is not noticeable.

Another important difference at a dynamic level is related to the wheels. With 250 hp it has 18″ Diamant rims with Michelin Pilot Sport 3 225/40 tyres, compared to the lightweight 19″ Carbone rims with 235/35 Pilot Super Sport rubbers. According to the manufacturer, the 19″ rims lighten 2kg each versus the 18″ rims. Let no one miss the detail that replacing those tires in the future is not going to be very cheap, and that it's not worth putting tires of dubious reputation on a car like this. 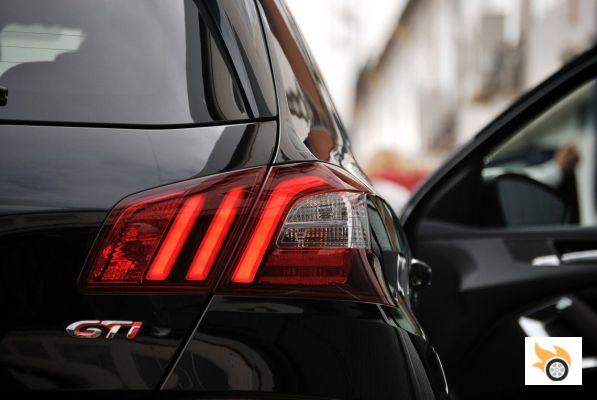 The rear brakes are 268 mm in diameter and look a bit ridiculous on the larger rims. With 250 hp the front discs are 330 mm in diameter, and with 270 hp they are 380 mm in diameter and made of composite material. The front calipers are painted in red and signed by Peugeot Sport. All images correspond to the most powerful model with 19″ wheels.

We continue talking about differences, because the 270 hp version has a limited slip differential Torsen, tared to 35%, which allows you to leave the curves to board without obvious loss of traction, passing the power to the wheel that skids less. We can't talk about a good front-wheel drive sports car without a proper self-locking system.


Finally, the suspension has been stiffened all over, and has stiffer elements. It has also increased the negative camber, both front and rear, understandably compared to a 308 GT. The reduction in body height is 11 mm, which sticks it more to the ground and lowers the center of gravity. The rear suspension is still torsion beam, just like the Mégane RS and Civic Type-R, compact sports cars that are not exactly lame. 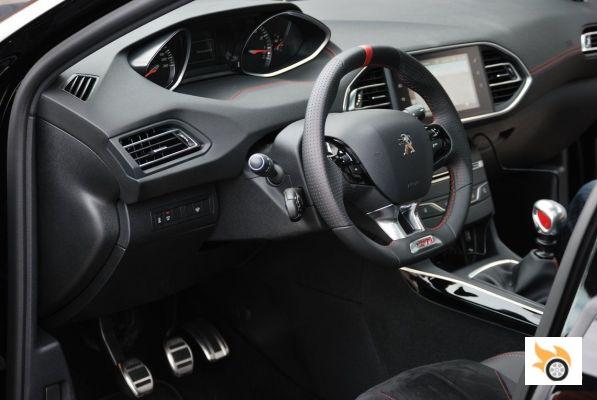 An interior with sporty details

Although it shares many elements with the regular 308, there's a different atmosphere. Black predominates, even on the roof, which contrasts with the red on multiple parts and stitching. We will find aluminum in the door sills, pedals, footrest and gearshift knob. Standard with 270 hp and optional with 250 hp, equipped with leather / Alcantara front seats with integrated headrests, provide very good support to the body without discomfort at any time.

The instrumentation is specific, with the speedometer showing a checkered flag motif in the background (checkered). Like the 208, this car has a small and low steering wheel, with the instrumentation well raised. If we find the right driving position, visibility is good, and the small steering wheel helps in sporty driving, you have to move your hands less. You can see it in the video, a few lines below.

By default, the instrumentation color is white, but turns red when the "Sport" button is pressed.

This button also makes the throttle more sensitive and the computer display shows acceleration, power, torque and turbo pressure. Another effect is that it changes the sound of the engine, it's synthetic, through Denon speakers. It sounds fatter, without making more noise for the others, and it's much more convincing than in other cars, like the Lexus F Sport. I link you to a video that includes the synthetic sound, well recorded, and tell me if you are convinced or not.


Once I've told you everything relevant to this model, we must talk about how it goes on track. In the video you will see something more spontaneous, there was no time to prepare a script or anything like it. Two laps with a pass through the finish line and a cool down lap. Nothing more, there were too many of us to try it. Sorry for the audio quality, I did my best, but the GoPro record the sound, and with the helmet on....

I tried to lie to repeat, but it didn't work, I'm a very bad liar. That morning the Jarama track was soaked by intermittent rain, which added to the rubber that accumulates the asphalt for years, makes it a very delicate terrain to go with a car quickly. I was fast, but within reasonable safety margins to avoid a FAIL.

The first thing you notice is that the engine pushes with a lot of desire, and if you don't shift smoothly, the front axle feels the forceful onslaught of so much torque. It accelerates a lot, but it also brakes a lot. The available grip wasn't ideal and that didn't make the brakes show off as much as they could, but you can feel them very precise and dosable.

At no time did I ever have to use the brakes fully.

As the track was like that, it wasn't worth going down to second gear because the acceleration gain was nil, and the engine has enough power to get out of the corners in third. What's more, a higher gear applies less torque to the wheels, which reduces traction losses a bit.

I felt quite comfortable in the sense that the stability control only seemed to intervene when I was about to start losing control of the car. Before that, the tires and steering were already warning me, so I was able to anticipate my reactions. The feeling of being in control was almost constant.

What I liked least was the feel of the gear lever, which isn't as precise as I'd like, nor does it have as sharp a travel, nor is it mechanically operated. I value these things a lot in a car with these characteristics. It doesn't have an automatic gearbox, nor is it planned to have one. 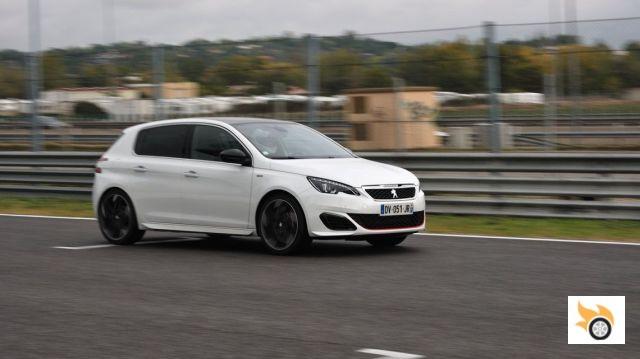 It's a pity it couldn't go on fire, because it looks like a very fast car and very well tuned. Peugeot boasts the best power-to-weight ratio in the front-wheel drive segment, but they're not going to go head-to-head with Honda, Renault and SEAT to see who's faster at the Nürburgring. What a pity.

As the steering was a bit slippery and felt light, I couldn't tell if the steering would be pushed to the inside coming out of a banked corner. It's what's called torque steering, and it was very noticeable in the Juke Nismo RS we tested recently. I wouldn't exactly consider it a flaw, I like it too.

I didn't think to remove the stability control

I remember a presentation of the Alfa Romeo 147 Ducati Corse, with front self-locking (Q2). Without traction control they were great in the same wet conditions and on the same track. The 308 GTi doesn't relax it, you either have it or you take it off, and it wasn't going to be my mother's first born who was going to have an accident that day. I preferred to go with "nanny". If it had been a very intrusive ESP, rest assured I would have mentioned it. 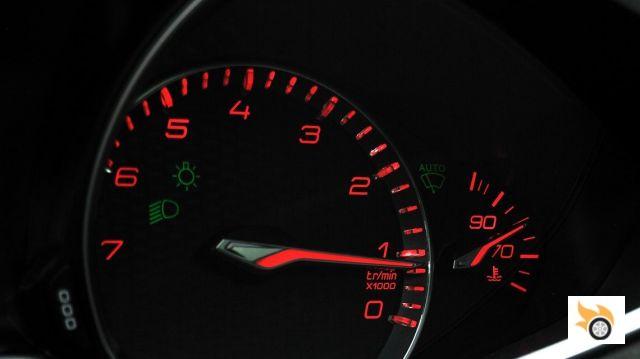 Given the difficulty of the test conditions, I declared myself satisfied. I was so focused on driving that I had no idea how fast I was going. I was constantly getting annoyed by the inverted tachometer, higher revs, more to the left. This car is like that, and you have to love it with that defect.

I was in perfect union with the car, almost being able to caress the wet asphalt with my fingertips. My ass could feel when the Michelin tyres were at the limit of their possibilities. So, I dosed accelerator, brake and steering to go as fine as possible, and that the ESP didn't have to do its job. Another time we will have to check how it goes with a very dry asphalt and a festival of curves, it can be a shot of adrenaline.

Conclusion? If you want the power to show off, overtake and drive on the motorway, the 250 hp will do.

If you want to enjoy pure driving on curvy roads, and have the maximum feeling of control, it's worth the extra 2,500 euros for the difference in wheels, the self-locking system and those 20 extra hp. I'd go for the 270bhp. The 250bhp version has an electronic differential, based on brakes, and it's an acceptable function in low-power engines, but in one like this, I'd definitely go for a mechanical one. 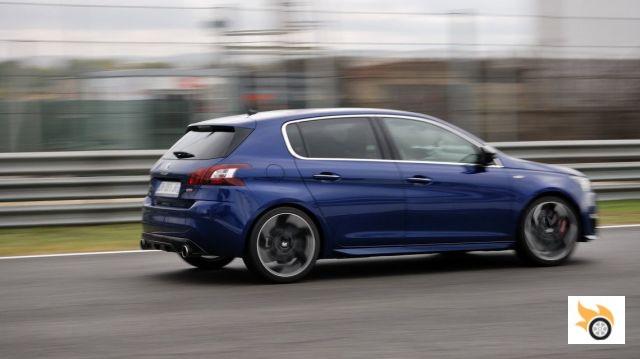 For the same price we can get a premium compact with a 150bhp diesel engine. Peugeot isn't asking anything outrageous for such a well-tuned car, nor is it expensive compared to other alternatives. Sales will be in a wide range of 200 to 600 units per year, it is a very closed segment, we are no longer in a time of irresponsible bonanza.

The typical customer of this car is a man of 44 years old on average, who probably has another car, and who can perfectly consider using it every day. We won't see many young people behind the wheel of the 308 GTi, at least at first hand.