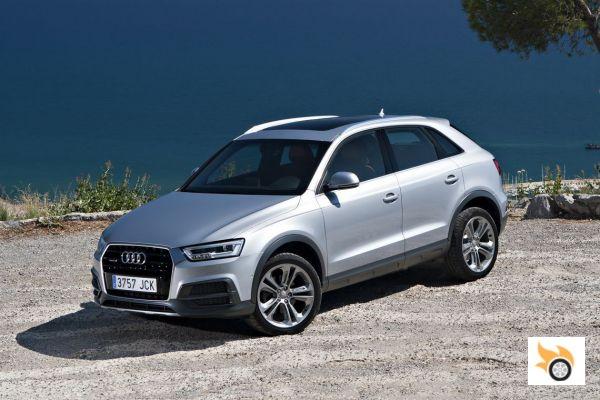 Often, when we talk about a restyling we call it a facelift. In the case of the Q3 could not be more true, as almost all aesthetic changes focus on the front of the car. The bumper has new (fake) air intakes on each side of the "single frame" grille. This is subtly different in its shape, but above all it extends to new xenon headlights with LEDs. Thus, the Q3 was the first to wear the new Audi grille that we will see in almost all models in the range from now on; the new Q7 and A6 already look the new.

The dimensions of the new Q3 also remain unchanged. It measures 4.39 m long (it is longer by a few millimeters). It remains one of the shortest SUVs in the premium segment (the shortest being the Evoque at 4.36 m long). Width (1.89 m) and height (1.59 m) are unchanged from the original Q3. Obviously, with a simple restyling, the wheelbase remains unchanged at 2.60m. In these conditions, the Q3's roominess remains unchanged.

The driving position is high, as in any self-respecting SUV, and offers excellent visibility at all angles, except perhaps for a slightly thick A-pillar (which can make left-hand turns in the city difficult). It's also worth noting that the driver sits 10cm higher than in the Mercedes GLA. Anyway, you never have the feeling of being in a sedan with little glass surface, the interior is very bright. 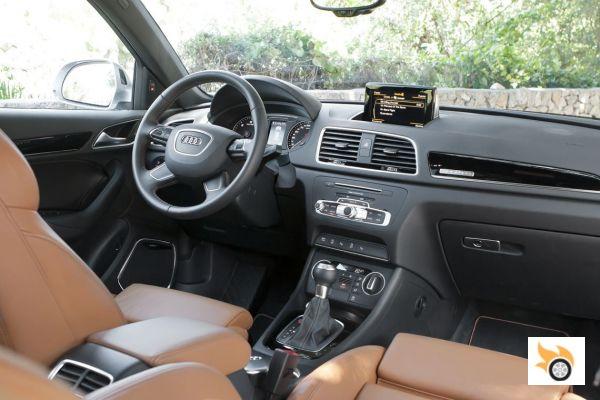 The perceived quality, both in the choice of materials and assembly, remains one of the strengths of Audi. The finishes have not changed in this new version: high quality materials, at least in the upper part of the dashboard, and the quality of the assembly is always above the segment average, except perhaps if we compare it with the Mercedes GLA.


In this top of the range version, the seats are electric and with a multitude of adjustments (even the length of the bench is adjustable). In the front, the space, both for the legs and in width, is good. However, tall rear-seat passengers will disagree with that perception because of reduced legroom and a sloping roofline that reduces headroom. But the vast majority will be comfortable in the rear seats. The only one who will complain will be, as always, the one in the middle seat. Narrow seating, little legroom because of the transmission tunnel and rear climate controls: you really shouldn't be sitting there. In the end, the Q3 offers good roominess, it's better than a Mercedes GLA or a Range Rover Evoque. 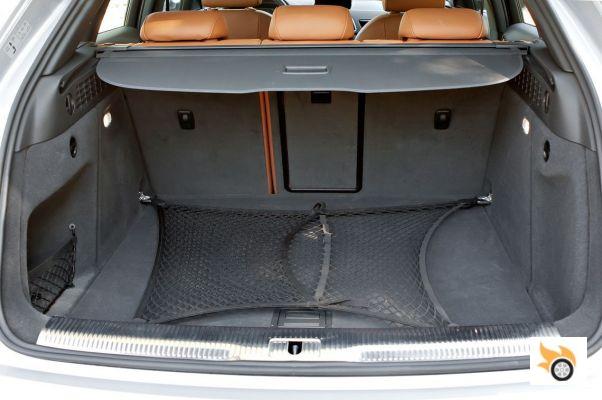 The boot, meanwhile, is average for the segment. The 460-litre volume is well below that of the Evoque (575 litres) and just above that of a GLA (421 litres). Once the rear seats are folded down, the load area is completely flat, freeing up 1,365 litres of space. The initial hierarchy is maintained, with the Evoque offering 1,445 litres and the GLA 1,235 litres.

The load floor, just over 80 cm from the ground, reminds us that this is not a break to use, although as they can equip (in option) a safety net, a 12 V power socket, a hatch for skis and even a gate with electric locking and opening. 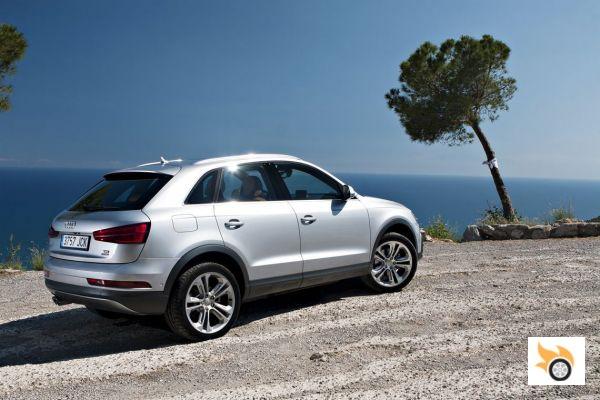 The unit that left us Audi equips the 2.0-liter TDi 184 hp to replace the previous engine of 177 hp. In Spain, this engine is only available with all-wheel drive and S-Tronic dual-clutch 7-speed gearbox. The increase in power is mainly due to the increase in the maximum pressure of the common rail injection that goes from 1,800 bars to 2,000 bars. Obviously, this engine complies with Euro6 standards. The reduction in nitrogen oxide emissions is achieved by means of a classic SCR system (Selective Catalytic Reduction) with water and urea injection, i.e. AdBlue.


The additional 6 hp compared to the previous version will not change anything in terms of perception or performance. Moreover, the maximum torque of 380 Nm is unchanged, except that it is now obtained at 1,800 rpm (instead of 1,750 rpm) up to 3,250 rpm. Thanks to the dual-clutch gearbox, which offers acceleration without gearshift interruptions, the Q3 is capable of a 0-60 mph sprint in 7.9 seconds. Curiously, however, I found the gearbox to be counterproductive in the 80 to 120 km/h (50 to 120 mph) exercise. The Q3 does it in 6.1 seconds, but with a slowness for kick-down that I didn't expect. I think any experienced driver would be quicker downshifting in a manual gearbox.

This diesel deserves a better acoustic insulation during acceleration.

The loudness and sound level of this 2.0-liter TDi, especially above 2,500 turns, are not worthy of the refined cabin and Audi. While in gasoline versions the sound level is very low (only aerodynamic noises are perceived at speeds illegal in Spain), this diesel deserves a better sound insulation. Although it is true that once we are at a stabilized speed on the road, the engine becomes more discreet. This is a contradiction, as this is the most powerful diesel version of the Q3, not to say the most powerful with this fuel, so it's expected that its clientele will accelerate hard from time to time, and that's when the car is at its noisiest. That said, if you're the type that's going to do a lot of highway miles and not a lot of city driving or have a light right foot, it's a relatively quiet car. 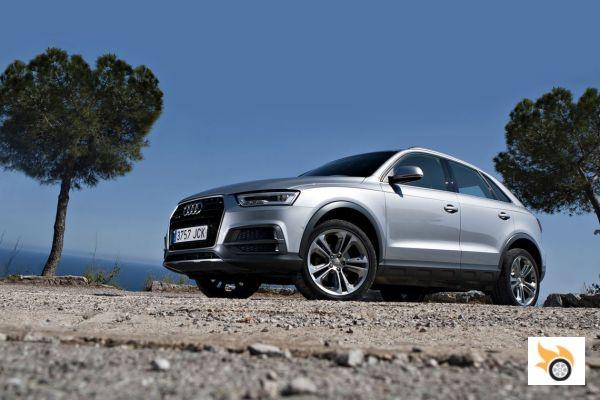 The modifications in the chassis section are so minimal that I honestly didn't notice them. A fine-tuned stability control, barely more permissive in Sport mode, and rear brake discs that go from 282 mm to 300 mm in diameter are not aspects that make a big difference on a day-to-day basis.

For the dynamic aspect, it should be noted that the Q3 has more in common with a compact car than with the rest of Audi SUVs. The engine is positioned transversely ahead of the front axle and its all-wheel drive is Haldex type (multi-disc clutch); despite the Quattro moniker is not a sophisticated Torsen as in his older brothers. So, despite its SUV status, its 170 mm clearance - that's the clearance of a Skoda Octavia Scout - (or 150 mm with the S-Line sports suspension) and low-profile tyres limit it quite a bit in off-road situations. Even in Comfort mode, the suspension is a little too harsh for off-road. The all-wheel drive, Haldex-type, gives priority to the front axle. You will reach the limit of the tyres' grip before you reach the limit of the Haldex system's capabilities. The mechanical protections (plastics) don't encourage you to venture off-road either. Even so, the Haldex traction, as well as the ABS and ESC calibrated for off-road situations provide a plus for those who go into broken roads (as long as it hasn't rained, because asphalt tyres can't handle mud). However, let's not kid ourselves, the Q3 is made for asphalt. 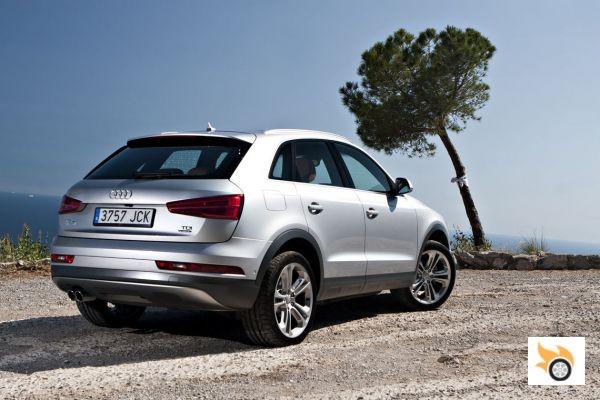 On the road, the Q3 boasts flattering dynamic qualities if you push it to 70% of its potential. In these conditions, body movements are quite well controlled and it shows a certain agility in twisty areas. The tendency to lengthen the trajectory in the tightest corners is not as evident as in other models of the brand. This is due to both the set-up and the torque distribution between the inside wheels and the outside ones. All this if we don't force the pace.

The Q3 boasts some flattering dynamic qualities... if you push it to 70% of its potential.

The Q3's trump card is its ride comfort. In terms of comfort, it is one of the benchmarks in the segment, although it can be a little stiff at speeds of less than 30 km/h over some of the road irregularities typical of cities (expansion joints, speed bumps, potholes).

Driving the car in a very happy way, without reaching the limit, we will find a car whose steering filters too much what the wheels do, much more marked body movements and a clear understeer. Anyway, if you are looking for a car with great agility, the Q3 2.0 TDI should not be one of your options. 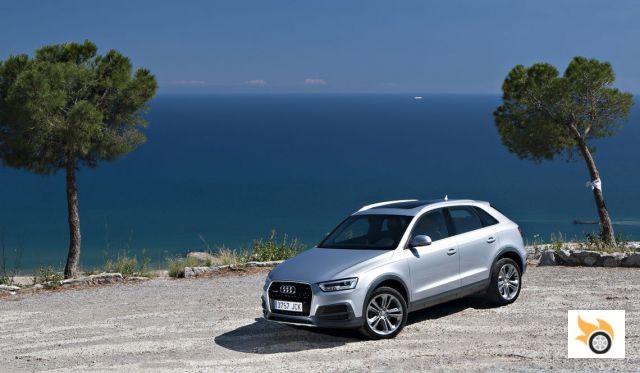 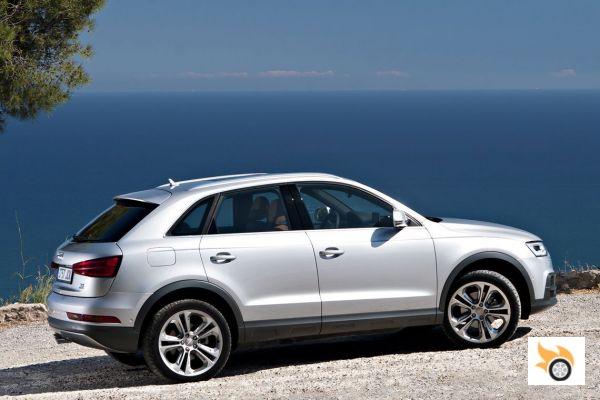 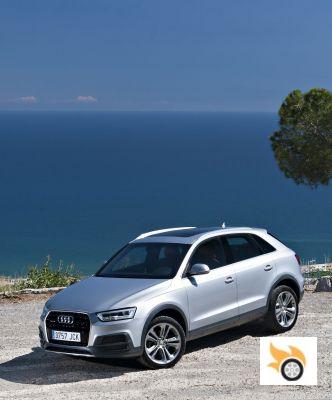