How Mercedes reinvented itself with Zetsche's moustache at the helm 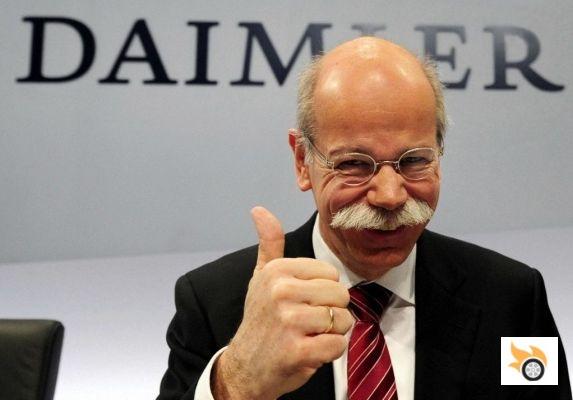 But Dieter Zetsche, the CEO of Daimler, is not the only one to envy the other two figures. The challenge Zetsche faced when he took the reins at Daimler in 2006 was enormous. Mercedes-Benz had lost its global premium market leadership, customers were complaining about the products and their reliability, the brand image was badly damaged and stuck in the past, and Chrysler, then part of Daimler, was floundering.

In eight years' time, one looks back at the situation Zetsche then had on his hands and compares it with the Mercedes-Benz we have before our eyes, and is surprised at the work of "the gentleman with the smiling moustache" for the better.

Dieter is one of the few engineers who make it to the board of directors of a car brand, usually full of people with an economic background.

Dieter started his career as an engineer at Daimler in 1976 in the research and development department. By 1981, he had already earned the position of assistant to the head of commercial vehicle development at Mercedes-Benz.

In parallel to his professional career, he completed his training in 1982 with a doctorate in engineering before taking over the coordination of work in the various international commercial vehicle divisions of the company at Daimler in 1984.

In 1998 he became a member of the Daimler board of management by virtue of his long career with the company, and to some extent gave up some of his engineering work to focus more on business management.

It was just in that same 1998 that Daimler made a move that seemed bold and appropriate at the time, merging with Chrysler. Two years later Dieter was sent to the United States as CEO of the American brand of the starry pentagon.


At the time, Chrysler's problems were pressing, after the 1990s without a clear pattern of growth, but Zetsche knew how to turn the situation around, and managed to turn the North American division into a profitable unit, where Mercedes-Benz was also a commercial winner. By 2006 his achievements did not go unnoticed, and given the needs of Mercedes-Benz, the board of directors decided to proclaim Zetsche CEO of all Daimler.

And this is where Zetsche's great crusade began, where every step can be described as a success in itself.

Dieter's first clear-cut decision was to divest Chrysler and sell it as quickly as possible. It was shocking to see the move, since, after all, Zetsche had been running Chrysler and had managed to improve the Detroit firm's accounts. But the new CEO knew better than anyone how complicated it was going to be to truly integrate Chrysler and Daimler under a single structure where there would be a real transfer of technology and resources to take advantage of the size of the industrial titan he had on his hands.

Without many resources to invest, Zetsche's priorities were therefore not on Chrysler. So his number one goal was to sell Chrysler and focus all possible resources on Mercedes-Benz to achieve the firm's turnaround feat.

Zetsche's move was masterful. It's not clear whether Dieter already smelled the crisis coming, but he got Daimler to cash in by selling a company that in a matter of two years would go bankrupt and be bought by Fiat for "zero euros".

Zetsche's next priorities were based on three fronts. The first and most fundamental was to recapture sales, and for that it was up to the firm to grow downwards. The A-Class and B-Class had not worked as compact alternatives to the traditional C-segment in Europe, and Zetsche saw clearly that this could not continue.

So he opted for a radical change in the brand's image. From technical and conservative traditionalism, where the content was above the product image, he moved to a brand that created visual sensations, dynamism and also some risk.

This move had always been seen as a bit too risky for a brand whose customers were on average around 65 years old. But, as Zetsche acknowledged at the time, focusing on that market stratum was leading to industrial death.

Zetsche has opted to push the brand downwards with technically conventional but aesthetically aggressive compacts.

The new A-Class and its C-segment derivatives began to be outlined as products where, although technologically they were not going to be as cutting-edge and innovative as the first A-Class, they were going to have an aggressive image, with the idea of winning over new generations to the brand with the star.

The huge financial investment needed to undertake these projects also came at the height of the recession, and many investors were then afraid of how money was being spent at a very high rate to enter a segment that until then had not been strategic for the brand.

But Zetsche was sure of what he was doing. And analysts, in the end, are people who know a lot about the stock market, stocks and financing, but zero sensitivity to cars, as has been proven time and time again.

The arrival of Daimler's compacts in the last three years has had just the effect promised by Zetsche, and in one fell swoop, Mercedes-Benz has managed to win over young people who weren't on the brand's radar before. The sales volume gap with Audi and BMW has narrowed, while profit figures are soaring.


And all with a product that, from an engineering point of view, is "worse" (or at least less innovative and cutting-edge) than the first A-Class was, with its underfloor engine and huge cabin compared to the exterior dimensions. But if Zetsche's strategy has shown anything, it's that people in the premium segment aren't looking for a technological product, but rather the image of a technological product, even if it's a very common product in terms of solutions (with the front transverse engine positioned far in front of the front axle and a huge polar moment of inertia). In fact, this point was already discussed here, when we talked about the sales evolution and technological involution of the A-Class.

This was not the only change in the brand's products. Under Zetsche's tenure we have experienced two small aesthetic revolutions within the firm. He wasn't in charge when the original CLS was developed, which was launched almost at the same time as his "coronation" as CEO of Daimler. But the CLS already showed that Mercedes-Benz could take aesthetic risks again with a sharp and aesthetically pleasing sedan. That aesthetic generation, that DNA permeated much of the brand image of the first "Zetsche" cycle, but the second aesthetic cycle, the one captained entirely by the gentleman with the moustache, has been another story entirely.

From the traditional bland minimalism transformed into technical subtlety by the CLS, this new aesthetic generation that Mercedes-Benz now has on its hands is an ode to curves. It is all organic design and baroque, with a profusion of nerves and decorative elements in the form of tension lines that serve to add aggressiveness and essence to the bodywork of the firm. A move that was also considered risky, even more so when Audi or BMW are pulling for rather more conservative ways in aesthetics. But Mercedes had to risk to regain lost ground and... it's working.

Investing in Formula 1 didn't seem like a good idea to many shareholders a couple of years ago, but now no one can argue with it.

There was Mercedes-Benz racing in Formula 1 when Zetsche arrived at the helm of the company. But successes on the racetrack couldn't be transported directly to the brand's image. Dieter quickly realized that what he needed to do was to get McLaren out of the picture, because it was taking too much credit for what it was doing, and was also holding it back on many fronts, such as supercar production, after the SLR fiasco.

So, when they saw the opportunity to buy Brawn GP (with the ex-Honda team winning a world championship in which they thought they were not going to run, with money borrowed from Honda), they did not hesitate and went for it.

In the midst of an economic crisis, and with a performance crisis that had Mercedes on the ropes in F1 until last year, it didn't take long for market analysts to come out again and complain about what Daimler was spending its money on.

But Zetsche knew that the important thing was that a regulation change was coming. One in which the enormous technological potential when it comes to developing engines by Daimler (far superior to Ferrari or Renault) could leave everything to sentence in this 2014.

Zetsche was not wrong. Mercedes has swept. And it has done so to the point that its dominance at the level of engines and equipment in Formula 1 has reported an image of leading company that no one can put in between said. Where BMW failed to win years ago, the star brand has made a fool of its rivals.

Again, they asked for Zetsche's moustache and head, and Zetsche has answered with achievements, without raising his voice.

But Dieter had faith. He made extraordinary moves, such as acquiring shares in Tesla, which will now bring more than 500 million in profits to Daimler. Or selling interests in sectors such as aeronautics to focus on the core business of cars, recapitalizing the firm and maintaining a significant cash balance in cash "just in case".

Zetsche has certainly done well, and the numbers and figures prove it. But the most impressive thing about his eight-year run at the helm of Daimler is to see how time and again analysts and shareholder groups criticized his management with fear of change, considering his measures risky, and finally reality has shown that the "something is happening at Mercedes" was "a good thing".