Harder is not always better

But it's when engineering solutions are reduced to the interpretation of a single phrase that things start to go wrong. Many "tuners" and "neighborhood" "tuners" will sell you on the wonders of fitting "the shortest and stiffest springs possible" for your car.

Worse: when the marketing department of a car company comes to the conclusion that "offering sport suspensions helps sell cars", then we are going down a really dark and dangerous road.

And that, our friend, is a big mistake. A mistake that, moreover, not only occurs in cars prepared by the "guy on the corner", but now, by pure fashion, is ending up being imposed in the catalogs of many manufacturers, who seek to convince us of the sportiness of their suspension settings that, in reality, is completely wrong. Even their engineers know it. But why?

Evaluating the suspension of a new car, when it's your turn to test it, is something really complex. You have to break down several fundamental factors. On the one hand, there's the spring rate. On the other, the control of suspension movement provided by the shock absorbers. Then there is the full travel that the suspension is capable of delivering, in compression and also in extension. There is also the geometry, which is vitally important, and then the anti-roll bars, which are one of the most commonly misunderstood factors.

Nowadays we see more and more "sport suspension kits" for "generalist" models, which end up installed in our cars because "it looks cool" to drive the car at ground level. And also, "the car feels harder". This is the immediate effect of wanting to sell us all cars "as sports cars". Because it wasn't too long ago that a group of car salesmen discovered that it's a great sales argument to say that a car is "sporty". And since sporty is "cool", we have gone from having the best suspension for each case, to a worrying fact: now when it comes to choosing the settings of a car, it is not only the tester or the engineer who decides, but also the "guys" in the sales department have a say. 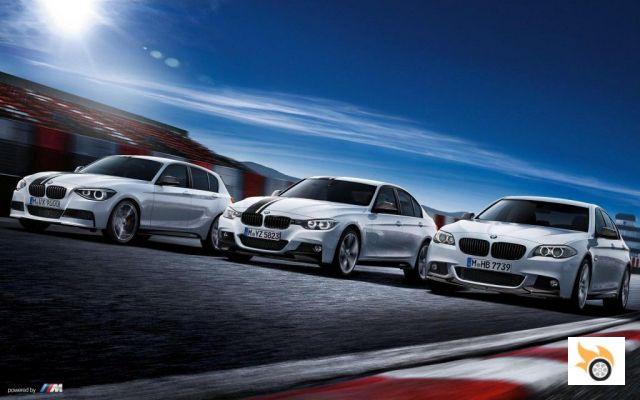 The manufacturers play with a false perception of stability and tread provided by hard springs to make us think that we are in a sports car.

By having to mount stiffer springs, the manufacturer has two alternatives: to also change the damping for drier shock absorbers that control the new spring, and avoid unwanted bouncing, or leave the standard setting. Sometimes what is chosen is to use the standard setting, which is already dry, so that the hard or soft springs control the movement of the body.

It is a mistake to think in "absolutist" terms in suspension settings: there is not something better or worse, there are things that suit a profile of use, and others that are better suited to another profile.

Putting harder springs, on asphalt in perfect condition eliminates part of the transmission of weight in movement of the car. Thus, when we face a strong curve, the car will balance less. When accelerating, the nose will lift less. And under braking, there will be less pitching. Yes, on the track, on dry tarmac, a harder suspension (and well compensated with the right geometries and the right tyre) offers a faster cornering. All advantages, right?


Well, no. In the real world, where the asphalt is broken, there are potholes, speed bumps, and a thousand more flaws, loading more spring in the cars leads to create cars that are worse in absorbing bumps. If in full support we find a broken on the asphalt, a car "with sports suspension" will give us a dry hit. If we are lucky to have damping adapted to the new shorter spring, the car will not bounce, and on paper will not break the line too much. But in many cases we can even stop the suspension and pull the car out of place, with the risk that entails. 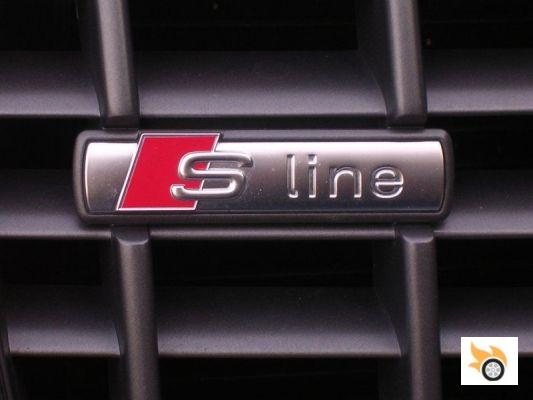 Before opting for a sports kit, think twice about whether your back and hands will thank you for it.

There is also the fact that the limit of the car is shown in a more radical way for the inexperienced driver. With hard, dry, short-travel suspension, the car is quicker to corner, but it also "goes out of place" less progressively and radically, making it more difficult to respond to a situation where the car "goes out of place".

In the wet things get even worse, as a car with hard suspension tends to behave worse, as it can't play with the mass transfer to get its tyres "in the water".

Putting short springs may be nice, but it conditions not only the comfort, but also the "ease" when dealing with the car's behaviour at the limit.

What do I mean by this? What do we want to complain about? Over the last few years we have encountered "low profile tuners" offering shorter and stiffer springs for hundreds of cars. Customers, wrongly, opted to buy these kits, and they destroyed the dynamics of those cars, making them less effective, more delicate to drive, and on top of that, less comfortable. Yes, on a circuit with clean asphalt they could go faster, but on an open road, with bumps, and with street tyres (many times "marking the partridge") you don't gain anything, but you lose.


But things have been getting worse. We already find cars that are offered as standard with "sporty" suspensions (I'll say the sin, and not the sinner, not to raise suspicions) that in many cases are outside of what anyone would expect to buy.

The spring-shock-stabilizer trade-off is a complicated love triangle, and if one of the three points goes the wrong way, it complicates everything immensely.

That manufacturers have opted to offer very hard springs in cars of eminent character and "everyday" use is a tremendous mistake, as much as 20-inch wheels. We can't lose the comfort of long journeys, or the everyday usability of transport tools just for the sake of selling us "sportiness". So if you're considering buying a sedan or compact for everyday use, and you're not a burnout who goes out to enjoy curves on the weekends, think twice about whether that "sport suspension kit" is really worth it. It may look better, but your kidneys will thank you for sticking with the stock springs. 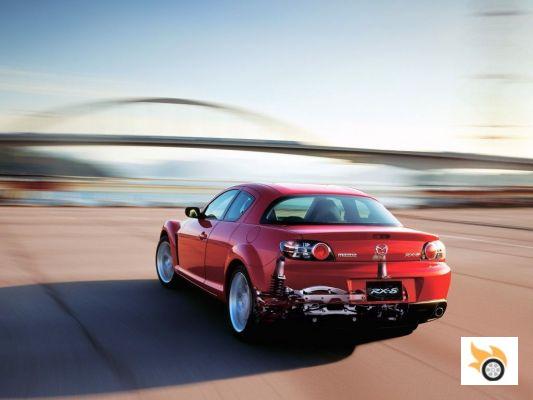 The RX-8 is one of the cars with one of the best suspension compromises we've ever seen.

I wanted to close the article with two examples: a positive example of a car with a delicious tuning, that didn't fall into the mistake of "extra-hard" springs unnecessarily. I'm talking about Mazda's now abandoned and out-of-production RX-8.

The rotary-engined sports car from Hiroshima used an extra-long suspension travel, both in compression and extension, with springs that were even soft, rather "dry" shock absorbers, and stabilizers of good diameter. The result? In a corner, the car was leaning frankly, and it did it in a fast way. As it was mainly supported by the stabilizers, and not by the springs, there was still "bump swallowing capacity" in the wheels. Also, with their "extra" travel, they allowed the car to "move its wheels" while maintaining trajectory.

So, even if there was a bump in the middle of the track, you could swallow it. And because the dampers were well sized, there was no unwanted bounce. On the straights, the car had good linear stability, and it swallowed bumps well. And the correct suspension geometry prevented pitch and roll on its own, not by loading springs.

It was OK. It was (and I say this as an ex-owner), a car for fine tuning, where going fast required doing things right. It wasn't "fun" to drive sideways, and you weren't going to dislocate it at the entrance of the curves by braking and balancing it. Quite the opposite. Stable, fast and dynamic, without falling into the "bouncy" of many modern cars. 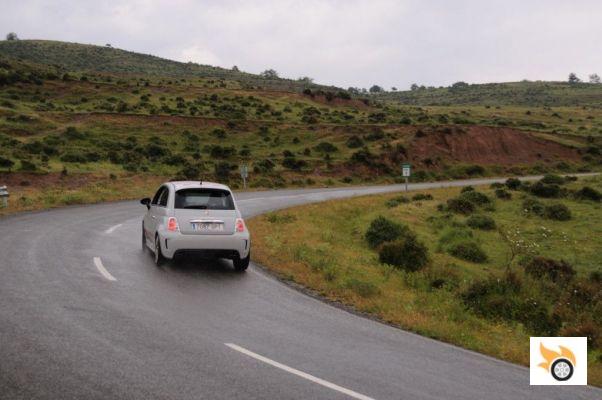 An early, original 500 SS without Koni FSD is a good example of a suspension that is too bouncy "on a whim".

As a counter-comparison, two very funny cars, but very conditioned: the MINI Cooper S JCW and the Abarth 500 SS without Koni FSD suspension (with it, things change a bit). Both have a user profile that seeks to have fun with them, and they get it. But the reality is that both suffer from more suspension travel, and would appreciate softer springs, thicker stabilizers, and more effective shock absorbers to control the movements of their springs. It is a clear case of these two cars, in which they have tried to give character through the settings, but they have lost what would be considered "pure and simple efficiency", in favor of "show".

You have to "format" your brain when buying a car, and really think about whether you are going to go out for "curves" every weekend, or if you are only going to use the car as a means of transport. If you do the latter, sport suspension is redundant.

We will leave for another article the issue of oversized tires. Because in this aspect, "bigger is not always better", is it?

Article originally published in October 2010, retrieved for Pistonudos
What is a horsepower? ❯

add a comment of Harder is not always better