What is wireless electric car charging and how does it work?

What is induction charging?

Don't worry, we are not going to expand too much, nor are we going to use mathematical formulas such as rotational or Maxwell's equations. We will try to explain it in a simple way. 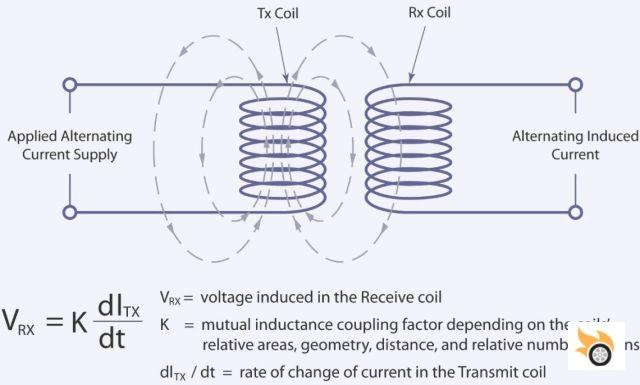 The system basically consists of two elements: a coil, in the transmitter; and another coil located at a certain distance, in the receiver. A coil is nothing more than a wire of a certain thickness, wound a certain number of times. Depending on these parameters, and the type of material inside, we will have an inductance value.

To increase the power, what is done is to try that the distance is as small as possible, the inductance is as large as possible, and that both coils are identical in number of turns, so that they enter in resonance; to give you an idea, it is like tuning the radio: the one that emits and the one that receives must be at the same frequency, so that the transfer of energy between them is maximum. 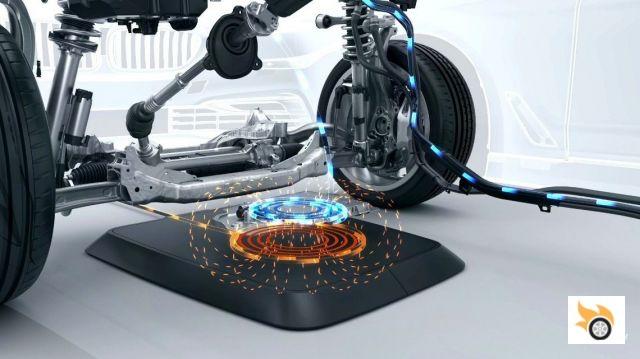 To summarize: look at the picture, the system is very simple. A current is passed through the first coil, and magically, current appears in the second one. Applying it to vehicles, the most important thing is the alignment of both coils: if both centers coincide, the alignment will be perfect and the power transmission will be maximum. Any small deviation will cause the performance to drop very quickly. So it is important that they are very well aligned.

From here, enter the accessory systems that each manufacturer wants to implement: a proximity detector with NFC data transmission, so that the system is not running 24 hours, a converter AC to DC to charge the vehicle batteries, etc.. It should be said that the system is quite safe, it can be used outdoors, and if we pass over it, even if only the transmitter coil is working, we would not die electrocuted, because our body would not be "tuned" to the same frequency. Even so, it would not be advisable, because of the parasitic currents that could be induced. Hence, safety systems are implemented so that it only works when the vehicle is aligned above the transmitter coil.

As we said, BMW will be the first manufacturer to commercially launch the system in 2018, as an option for its 530e (link to its data sheet). As you know, this is a plug-in hybrid with a 9.4 kWh battery, which is very small compared to any electric car on the market. BMW's inductive charging system is capable of delivering, in optimal alignment conditions, 3.2 kW. This means that we need about 3.5 hours to fully recharge the 530e's battery. As you can see, the system itself delivers very little power, making it useless for pure electric charging.


To give you an idea, if we wanted to recharge a Tesla 100 kWh battery from scratch, we would need more than a day, specifically 31 hours and a quarter. Therefore, the power it delivers is equivalent to what a household socket can deliver, and it is only useful and fast in the case of hybrid vehicles, whose battery is much smaller than electric ones. It's also an acceptable charging rate for a car like the BMW i3 (33 kWh), as long as we're talking about an overnight charge.

Still, it is very positive that a manufacturer "opens the game" in this field, so that the system begins to progress little by little. There are still no definite prices, but some sources point to a price slightly above 900 US dollars (around 800 €). We leave you a video where you can see how the BMW system works.

Induction charging and the rest of manufacturers

It is clear that BMW is not the only one interested in this technology. I would dare to say that all manufacturers have some prototype underway, using this type of recharge. Let's take a look at the most relevant projects.

Toyota, in collaboration with Witricity, already has a functional system. Bosch in collaboration with Evatran, with a system compatible with Chevrolet Bolt, Nissan Leaf, Rolls Royce Phantom 102EX (prototype) or Citroën C1 (prototype). Audi presented its induction system in 2015, and it had an output of 3.6 kW, very similar to BMW's. Volvo, together with Bombardier, also has an experimental system. Renault for its part collaborates with Qualcomm (the same manufacturer of most of our mobile CPUs, and the creators of Qi, the wireless charging standard for our devices) in its Halo project, where the Zoe is recharged at a distance of up to 40 cm with 94% efficiency, in tests carried out in London.


In our country, Renault is also committed to research with its W Alma project, and is developing a new wireless charger, together with the Plastic Technology Center (Andaltec), the company Premo, a company specializing in the design, manufacture and marketing of inductive components, the Institute of Materials Science of Madrid (ICMM-CSIC) and the Polytechnic University of Madrid. This project aims to have a functional model in 2019 with a power of 3.3 kW and 92% efficiency. 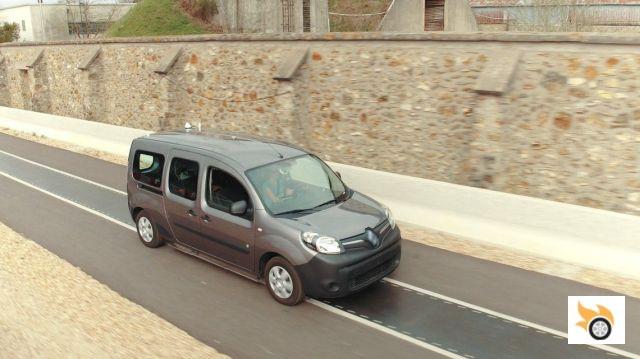 The future of induction will be on the move?

It is clear that we are at the beginning of a new era, and that this induction charging system has a long way to go. We have even seen experiments, such as the one developed by Renault with a Kangoo Z.E., where on a 100-metre track fitted out with inductive chargers all over it, they recharge the vehicle's battery - or make it discharge very slowly - as it moves.

Let's say it would be like a kind of tram, but without contact. Personally, I predict it will be as successful as Betamax video. I think that the cost of installation and maintenance of this infrastructure, along with the development of new batteries with higher capacity, will make the system very unattractive for mass implementation. This system, as it is currently proposed, can recover 0.25 kWh per kilometer at 100 km/h. In other words, it would only recharge if the electric consumption is currently below 25 kWh/100 km, which is feasible in a vehicle with the aerodynamics of the Kangoo Z.E. However, it would recharge the entire battery very slowly, and on a very long road.

As soon as there is competition between manufacturers, the system will improve, become more efficient and powerful, although as we have seen, today it cannot compete in power with a good copper cable.

What is an SUV? What was the first SUV? ❯

add a comment from What is wireless electric car charging and how does it work?