So when Matsumoto-san started working on the design of the MX5-ND hardtop, he knew it was going to be difficult, and although he says that the first idea was to design a roof similar to that of the previous NC-RC (RC for Roadster Coupé), they soon had to abandon the idea due to lack of space. From then on, they started to work on different proposals, but all of them were too complex and/or not aesthetically pleasing.

Once the engineer came to the frustrating conclusion that an aesthetically pleasing and reasonably simple design was simply not possible, he called together the other people involved in the project to discuss the problem. Matsumoto-san explains that once the meeting was over, the head of exterior design, Minamisawa-san, showed him a sketch he had made on the spot, and asked him if with such an exterior design, there would be room to fold down the roof... The sketch showed an MX-5 fastback, and Matsumoto-san, who saw the idea as the only chance to succeed, was quick to accept the challenge.

From that moment on, the kinematics design team had to work very hard to meet the functional requirements, while at the same time working with the design department to achieve attractive shapes... Achieving a functional and aesthetic design is always complex, but in the case of hard-top convertibles, the challenge is always much more complex, as the aesthetics are conditioned by the space available and the movements that the different elements have to make to be finally packed.

On top of that, the roof space of the new MX-5 is particularly small, and Mazda has always wanted to keep the small trunk intact...

You can like more or less the aesthetics and "targa" concept of the MX-5 RF, and certainly the car does not have the charm of a real roadster, but there is no doubt that the team of engineers and designers have done a great job, getting with the roof on, the RF is a beautiful coupe, and that once fitted its roof and window in an incredibly small space, and without affecting the trunk, we have an attractive targa in which to muss up our hair in style.

The MX-5 RF's roof and rear window retract automatically in 12 seconds, and although Mazda calls it a Fasback Roadster, it's true that once the hood is down, it looks very targa-like..... But is it a real targa? Perhaps it's not entirely clear, because on the one hand the rear window disappears when the hood is removed, and on the other hand, the "arch" that gives it that targa look is not actually in solidarity with the bodywork as it happens in a traditional targa?

As in the previous MX-5 NC Roadster Coupé, the roof retracts into a specific recess, so whether the top is down or not does not affect the trunk capacity, which remains at the same 130 liters of the soft-top version, and can be activated on the move as long as it does not exceed 10 km / h. The weight of the soft-top variant is not known, but it is speculated that the RF version will add between 50 and 60 kg. Mazda announced at the time that the roof color will be available in piano black or body color, although it is unclear if it will be a customer choice, or will depend on the body color and / or finish. 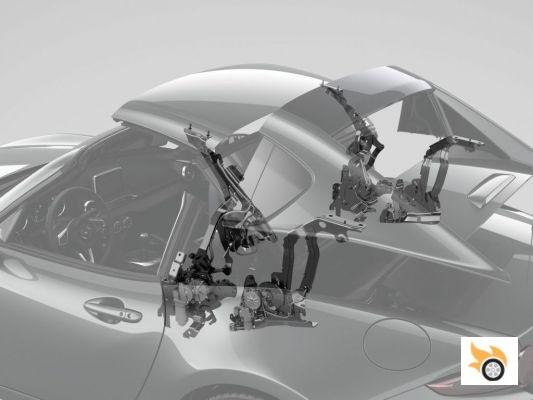 The first MX-5 RF has rolled off Mazda's production line in Hiroshima, and is one of the first 1,000 units of the special "Launch Edition" series to be sold in the North American market. The price of this special series, which in principle is not announced for Spain, will be $33,850, which is $2,530 more than the equivalent soft-top version in the U.S. The Launch Edition is only available in an exclusive and special Machine Grey paint, combined with the special "napa" leather upholstery in reddish brown (not available for the soft-top version), and as if they were not enough arguments, the price includes a limited series Tourneau watch.


Prices for our market are not yet known, but if we take into account the extra price of the Launch Edition for the USA, we would expect the RF in Spain to be about 2,000 or 2,500 Euros more than the equivalent MX-5 soft-top. 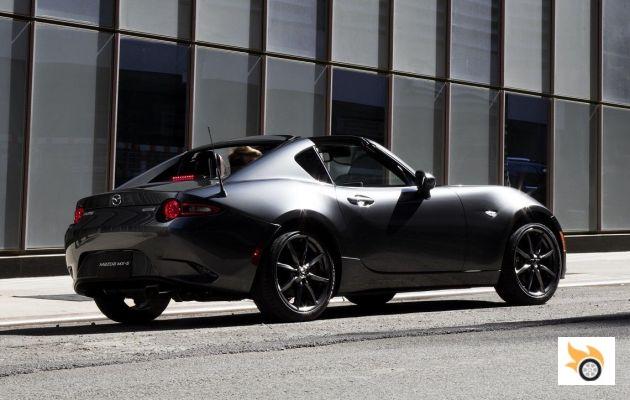 add a comment of Why does the new Mazda MX-5 RF have a targa design?