At the time it lived in the shadow of the Clio RS of the time (the 182 hp) which offered a similar "chicha", and a somewhat different driving dynamics. With the cup chassis the Renault was probably more praised, although the 206 RC did not detract either.

It didn't shine in the market at the time with spectacular sales, but the reality is that it was a very, very interesting proposal. We're going to tell you about it, because right now they're in a "sweet" price point. 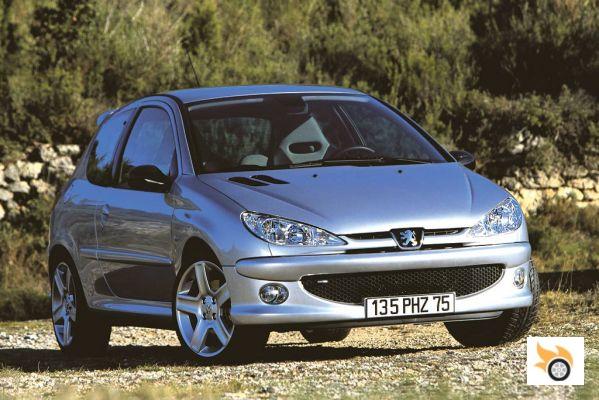 Starting with the aesthetics, we will tell you that on the outside the car was almost identical to a "normal" 206 GTI. It changed in aspects such as tires, beautiful and large, but extremely soft. They were 17 inches, with low profile tyres, and they were a bit of a struggle going fast and catching bumps (one of us bent them and had to have them repaired on three different occasions).

The front and rear track widths were slightly wider than its range brothers, the height of the car was lowered, the mirrors had an imitation "carbon fiber" housing (bad imitation, by the way), while the front bumper had the largest mouth of the performance versions.

The rear was characterized by its double exhaust tail and silencer behind the rear axle, while the spoiler on the boot lid was double. 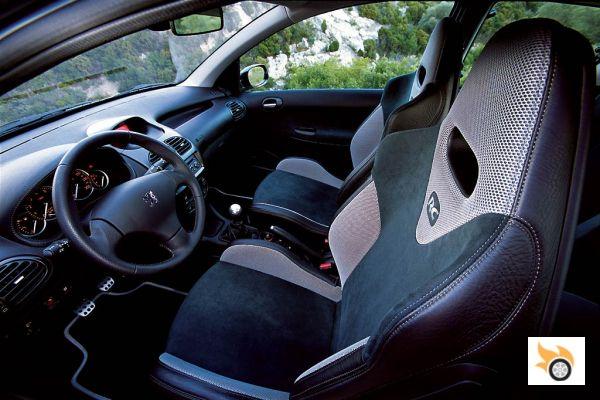 Inside the car had "bacquet" seats, which were still used in PSA, and that hold the body to the thousand wonders, with alcantara and a very nice mesh as main materials.


The clock panel was typical of the model, with very careful details in terms of oil temperature and oil level integrated, to better control the effort to which you subjected the small 206 RC.
Technically speaking, we have already told you about the jewel of the car: the 2.0 naturally aspirated engine, with 180 hp, variable distribution, resonator, and a careful treatment of gases. It was associated with a short five-speed gearbox (on the motorway a six-speed gearbox was missing...).

In terms of chassis, the car was much lower and stiffer than the "normal" 206 GTI. The rear axle was fitted with two transverse reinforcement arms so that the bridge of trailing arms linked by torsional bars would behave better under high lateral loads, without changing the trajectory set by the steering wheel. 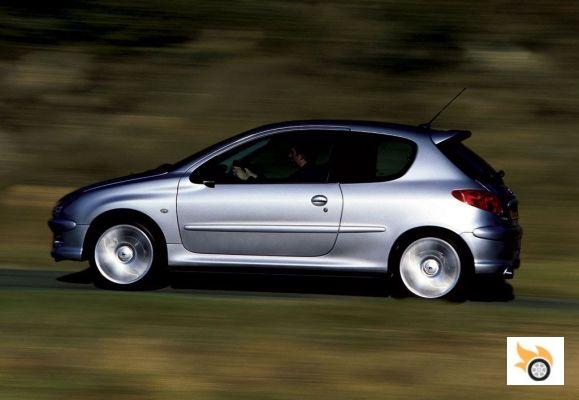 I get a little personal to tell you that if I bought this car it was because of the way it moves. When you get in you discover a steering with a lot of weight, little assistance, come on. On perfectly manicured asphalt, you have a very hard car, which follows precisely the trajectory set by the steering wheel, and at the same time is able to dislocate the line when you hollow the accelerator pedal in full support, to help you round the corners.

The grip is conditioned by the Pirelli tyres recommended by the manufacturer (some developed specifically for it, which were changed for a PZero Nero), which do not grip as much as this machine could handle (Pilot Sport 3 work much better in this aspect and are the recommended ones).


The engine has a power delivery that doubles duties: it has torque down low, it feels full, and it has punch up top, willing to stretch up to seven thousand turns of the red zone, all surrounded by a pleasant mechanical sound, a mixture of intake and exhaust.

The steering isn't extremely quick, but it does feel precise, and more importantly, it communicates something to the driver about the remaining grip on the front wheels. The brakes are powerful and metered, and there's ESP to safeguard your back if you push your limits and aren't willing to play with countersteering. 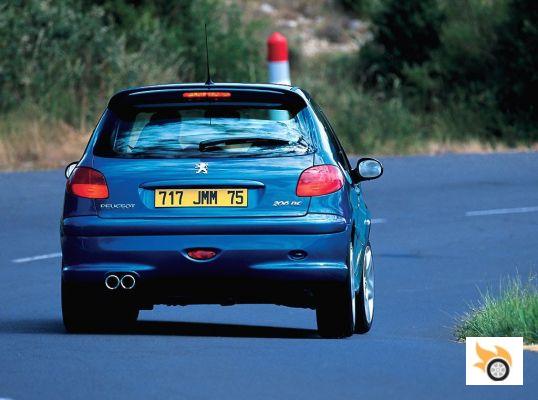 The downsides? There are. It's a car with such a stiff suspension that in everyday use, when there are potholes, holes, unevenness in the road, it makes them noticeable by moving the passengers and shaking them. It is noisy, marked by the gearbox, which lacks a sixth gear of relief.

And still on the subject of the gearbox, its precision is... debatable. As a "good" Peugeot gearbox, it leaves a lot to be desired in terms of shifting and feel. You can get used to it, but it's the least remarkable detail of the car, by far.

The grip of the front axle might be missing a self-locking differential (you can buy one from Quaife and install it), since demanding all the torque that is in the engine, you can lose wheels.

The driving position is... peculiar. It's reminiscent of an Italian car in that you have your arms stretched out and your legs cramped if you want to be properly seated. Heel toe can be done thanks to the positioning of the pedals.


In everyday use, the boot is more than capable, as in any 206. The rear seats are no marvel, but you can fit two adults in there without any problems, or an Isofix car seat. Fuel consumption can be around eight and a half litres in combined driving, if you don't go all the time to the cut. Although it can easily exceed 10 litres if you go "on the road" on weekends.

Things to look at and check

Let's face it, the 206 is not "the best car made by Peugeot" in terms of reliability. If you're buying one, you'll need to check the condition of the electrical and electronic components carefully, as they tend to give you a lot of trouble.

Check that the climate control works, that the needles on the dashboard do "normal" things and don't vibrate, that the central locking and lighting work properly. The power windows, the upper display of the radio in the center of the cabin... Any electronic problem of this type can be a mess to fix, even if it doesn't affect driving. 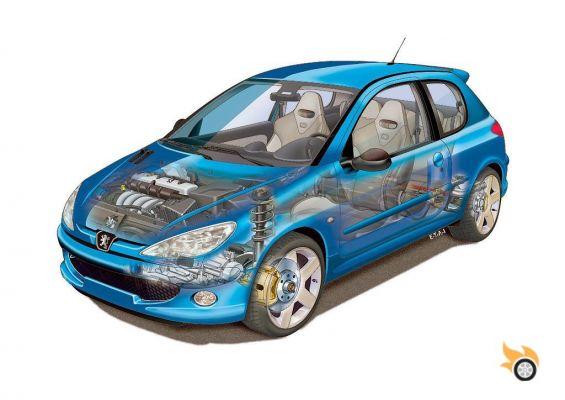 As for the rest of the car, the mechanics seem bombproof. It drinks some oil, that's for sure, but it's nothing out of the ordinary, or anything to worry about. The gearbox is, as we said before, its weakest point, and you'll have to check that the gears don't skip gears, come out, or that the bearings are too worn. If not, find another unit.

The seat side airbag cable tends to come loose, which gives an error on the gauge cluster. We found no solution to this problem, which appeared when we folded down the passenger seat, every few times.

The creaking of the dashboard or other interior elements should not be too marked, but crickets appear progressively, due to the stiffness of the suspension. It's not as "crunchy" as a MINI R53, but come on....

Another detail to review and take into account is the steering geometry. It is a car that tends to open the steering quite a lot, and you have to watch this aspect, or we will destroy the wheels on the inside.

How much it costs to buy it

You can find RC units for between six thousand and eight thousand euros. Paying around five or seven thousand for one would be logical, but remember, it is better to pay a little more for a well maintained unit (service book, for example, and zero accidents) than less for a "hackneyed" one that will give you problems. As always, in cars of this price, we would recommend paying cash, but if you go for financing, it would be logical to put €3,000 on the table, and finance the rest of the operation, which in two years would mean only €138 per month. 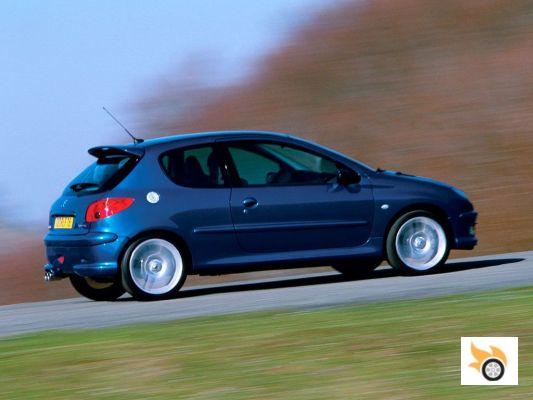 As for the insurance, if you have more than 5 years of license, more than 25 years of age, and you don't have parts in your charge, a price lower than 500 ¤ per year to third parties (account 450 ¤) is something "viable".

Although it has its drawbacks, like almost all cars, the 206 RC is one of those cars that make you smile when you drive it. It's fast, and its tuning allows you to play with its rear end, round corners, practice heel-toe... The engine sound and aesthetics are attractive, and the seats are very comfortable.

It's the best 206 ever made, and although it's a bit of a forgotten model right now, it's sure to get the attention it deserves over the years. It could be better, but if you want a sporty and economical car, this is a more than sensible bet. 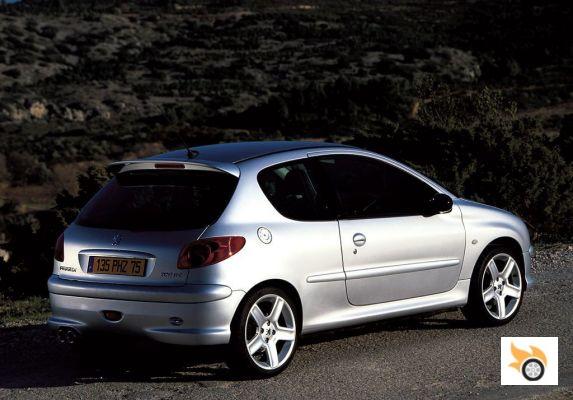