It existed in two different versions. The first phase was marketed with the 1.3 four-cylinder TU2J2 with 100 horsepower extracted with electronic injection. In its second phase changed this engine by the 1.6 TU5J2 of 103 hp, also "injected", with eight valves in the cylinder head. It would come to create, but in much smaller quantities, a version with 120 hp, catalyzed, with 16-valve cylinder head, with this same 1.6, which would reach the GTi and Saxo VTS soon after.

Nowadays they are starting to be appreciated for what they are: mythical cars, but if you look hard enough, you will see that you can find units for under 3.000€ in good condition. But what makes the 106 Rally special, and what should you look for before buying one?

On the outside it's a 106, but with some specific touches, such as the wheel covers and specific bumpers. It didn't have the same body kit as the XSi/GTi's of the time, which had a more... or perhaps a more cared-for look. The white painted sheet metal wheels maximized the idea of a base car for preparations, without incurring excessive weight, and reducing unsprung mass. 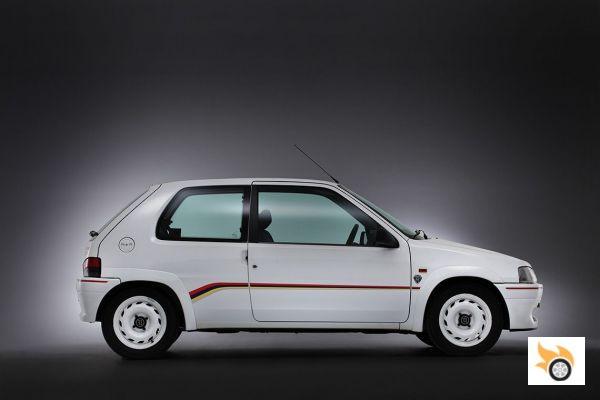 It's not an Alfa Romeo 33 Stradale, but aesthetically it's simple and nice.

It was only sold in white, red, black and blue (blue was not available in the first phase, and red was not available in the second phase). True, it is not a work in the aesthetic design, and is tremendously similar to its direct son, the Saxo, but this tiny car is one of those that enters well through the eye for sympathy, and for having a certain halo of intrinsic sportiness in its aesthetics.


Opening the door is to access a spartan cabin to the maximum. The plastics are hard, and many trims are missing compared to other 106 more careful. Here you can see sheet metal, and that is so to lighten weight. The instrument panel at least has the advantage that it has oil temperature, when nowadays cars are used to not even have the coolant temperature...

The front seats are quite close together, but there is enough space for two adults. In the back we can not say the same, and the trunk is not to shoot rockets, but as a car for daily use, for space, to run errands or go to work or college is more than enough.

The 106 uses an evolution of the Citroën AX chassis. The idea was to create an access model to Peugeot below the successful 205, without replacing it directly, offering a kind of "anti-Clio". Ultimately the 206 would be born, after seeing that the 106 did not quite capture the customer type of the brand, which would change the focus of the small Peugeot. 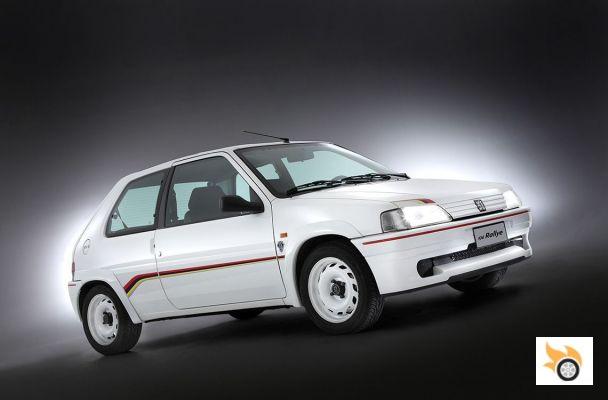 The monocoque is very simple, with McPherson struts at the front and trailing arms joined by torsion bars on the rear axle. In this Rally, power steering was an option only desirable for the most "lazy" in town. ABS brakes would arrive in the second phase as standard equipment, being optional in the first phase.

Light (825 kilos for the first phase), the 106 Rally was not able to compete in a straight line with the GTi, but that was compensated by its behavior. And to improve that aspect, the Rally opted for thicker stabilizers on both axles compared to the GTi, with the front articulated ball joints.


And how does it move?

If there is something we like about this car is the smiles you get per kilometer driven. Not long ago we talked here, in this same section, of the 205 GTi, and this 106 is very similar in many ways to that one.

Starting the engine is to enter a world of mechanical noises not entirely pleasant, as both tappets as intake and exhaust sounds come with some metallic rumble to our ears.

The Stage 1 engine asks us to stretch it all the way to the end to get the most out of it, because it doesn't have much torque down low, so you'll find yourself looking for the optimum gear ratio to get the engine close to seven thousand revs, something curious in an eight-valve engine. The Stage 2 has a fuller engine throughout the rev range, but not as much of a red-zone chaser. It doesn't give that grinding feeling, but in return it's easier to get the most out of it. 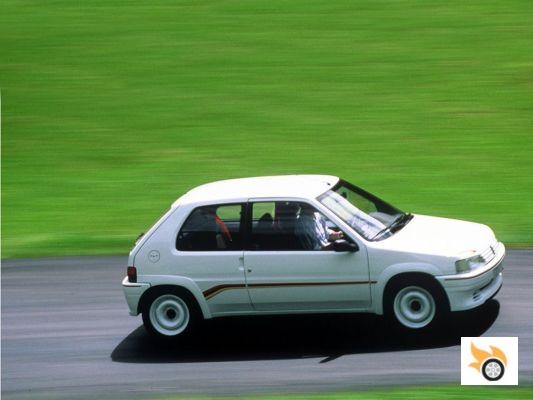 The steering accurately telegraphs available grip, and the rear is always ready to help you close corners.

In a straight line it's a noisy car, with bumps and potholes coming into our hips and neck neatly. If the road surface is uneven, it can take the car out of the straight line and move it a bit, but that mobility is provided by the stabilisers, which quickly compensate for those sensations when we enter a corner.

The car is almost instantaneously straight, as soon as you turn the steering wheel. You will have read me a thousand times complaining about the stabilisers on today's cars, because of the way they are set up. Today's customer wants cars that don't stray from their line when going in a straight line, so that the driver enjoys the peace of mind of having a car with "solid footing". We see this in cars with a strong sporty character. But this is achieved at the cost of not putting in as much stabilizer as we would like to have. 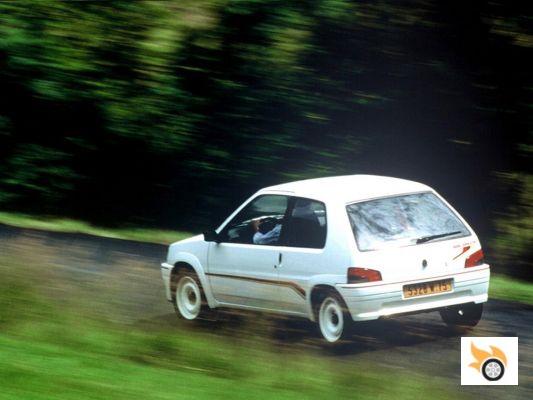 This 106 proves that a stiff front stabilizer allows us to have good front bite, gripping the road almost instantly. The steering wheel telegraphs in great detail the available grip, and responds with precision to our requests.

And the rear? Well, it's also joining the party. The Phase 1s respond with abrupt changes in throttle load, and we can even play with the inertias, with the butt already "somewhat turned" to the curve. The Phase 2's rear stabilizer is a bit thicker in comparison. This makes it even easier to change the yaw of the car in full support if necessary.

As there is no horsepower to lose the nose when accelerating, we can put on the gas as soon as we glimpse the exit of the corner, and play with the line. With the little power and the little weight we have in our hands, the game with the 106 is to trace the curves in the cleanest way possible, to take advantage of the available power, playing with frank support, and "feeling the road", every bump, every change of support, every white line... 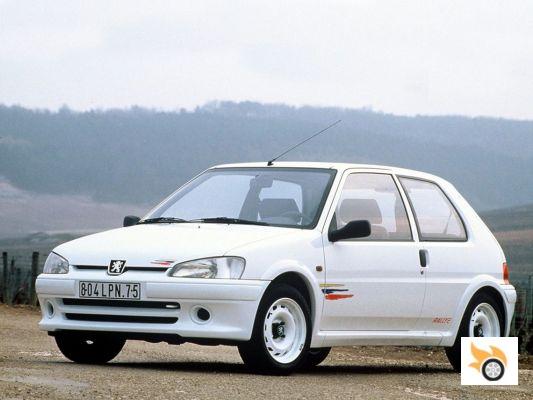 After a good cornering session you'll get off with a smile from ear to ear. Yes, your friend in the Corsa OPC Nürburgring may have arrived half an hour before you, but don't worry: he didn't enjoy the corners as much as you did.

The 106 Rally is one of those "school cars" that, with little power, allows you to learn to make the most of what you have, with a good chassis, exemplary in behaviour and manners, and with plenty of information available, so that your body learns to understand what is happening in the tyre-asphalt negotiation in search of grip.

Peugeot may not have the most reliable cars to its recent credit. Electronics problems two generations ago have cast a shadow over its reputation for reliability, which now seems to have been corrected. But the 106 Rally is "a rock". With almost no on-board electronics and a rock-hard engine, it has no known rust problems either.

All the "fat", everything you have to watch out for, comes from three big points.

The first is the gearbox, the weak point of many Peugeots. If you're thinking of buying one, check the play in the gear lever, check that all the gears engage properly and don't slip out, don't scrape... The usual stuff.

The rear suspension arms rear hoses tend to fail in their bearings. Their replacement (my friend Javi will remember this well, allow me to mention it...) is not too complicated, but if you find a unit with problems in these wheels, you'd better look for another free of any problem. 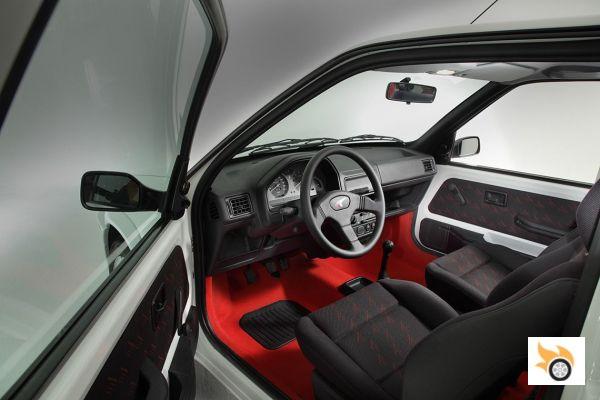 In a nutshell: the 106 Rally is a low-cost smile-smasher.

Finally, as a good car "looking for curves", what usually happens is that many of these 106 Rally have led a hard life, so you have to watch all the typical things you would look at a second-hand car of this kind: no goals, no ball joints touched, no fluid leaks, no warped brakes .... 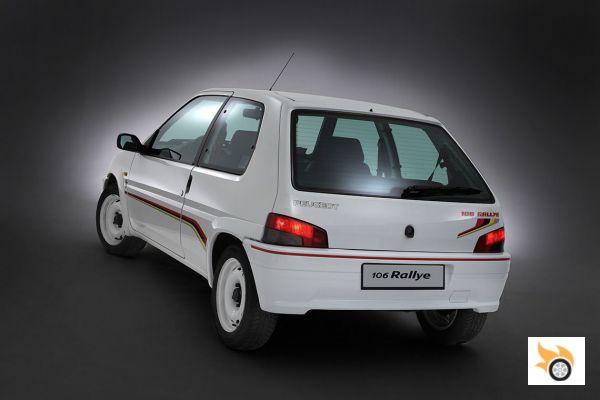 Apart from the 205 GTI, which is already a myth, if you ask me for a car with which you can have fun for little money in the curve to curve, and with enough performance to start and learn, the 106 Rally would be my recommended model. No, it's not recommended for long motorway journeys, and no, it's not as safe as a more modern car (a 206 for example), but it has that rare character that we find less and less in modern cars every day. It's pure, it's addictive, it's fun, and... it's not too expensive. All the others I can think of from the 106 era onwards are much more powerful, more complicated, more expensive to maintain?

Anyway, the 106 is one of those last links of the real economic sport utility car.

"Will I be able to get my car license in 2 weeks?"

Car racing is for the rich