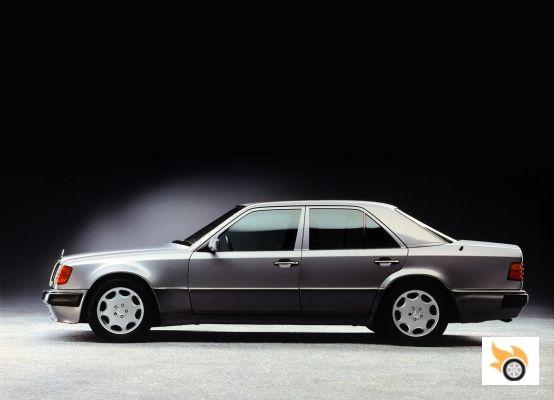 BMW's only rivals were the 380 bhp Lotus (Opel) Omega and its 300 km/h top speed and the versions prepared by Mercedes specialists such as Brabus or AMG. Both the production figures of Lotus and the tuners did not worry BMW, as only 891 units of the -not very popular- M5 Touring were produced, compared to 950 units of the Lotus Omega...

The Meccano of Stuttgart

Obviously, Mercedes was not going to leave BMW alone in the domain of the Autobahn. The engineers of the brand with the star had what they considered to be the ultimate weapon ready, but they had no place to build it, so they asked their neighbors at Porsche for help. In Zuffenhausen, the 959 assembly line was empty, as the car was no longer in production, so they accepted with open arms. This is how Porsche produced "its" first 4-door body.

All the credit for the development of the 500E goes to Mercedes, but it was up to Porsche to make sure that everything they had arranged at Mercedes was properly integrated into the body of the W124. The first thing was to get the V8 into the engine bay, which meant widening and reinforcing the engine bay, as well as the floor of the car. While they were at it, Porsche technicians ensured that the engine was as far back in the engine bay as possible for the sake of dynamic performance. 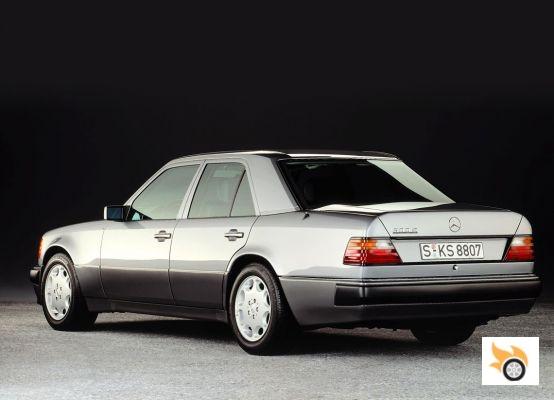 They also strengthened and redesigned the rear suspension, widened the transmission tunnel and created a new exhaust line that followed a different path under the car. The widened wings were assembled at Porsche before the W124 returned to Mercedes for painting and then back to Porsche for final assembly. No doubt a long (18 days for a single car) and complicated process that did not help to contain the manufacturing costs and the final price.

The 500E was equipped with the 4,973 cc 32-valve V8 with 326 hp and 430 Nm from the SL500. It was exclusively associated with a 4-ratio automatic transmission. Similarly, the 300 mm brake discs and 4-piston calipers at the front came from the SL500 (320 mm discs from the SL600 from the end of 1993). The car also received traction control as standard, which could not be switched off. Stealing customers from the BMW M5 was not going to be an easy task, it was necessary to convince them that the 500E was more than just a Porsche tuned taxi, even if it was a very fast one. 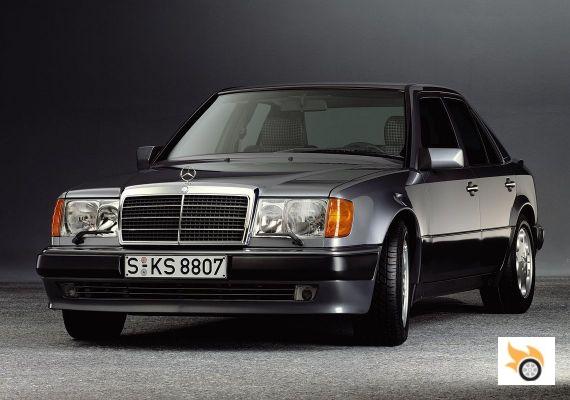 Visually, the 500E is as understated as the RS2 is striking (the other "made in Porsche" model of the same era). Only a trained eye will spot the flared wheel arches that differentiate the 500E from a simple 220E, for example. In fact, it's the only visual alteration Porsche made to the 500E. The interior is luxurious and packed with power amenities, such as the seats, power windows, sunroof. Of course, the dashboard and doors receive classic hardwood trim. On the centre console, the classic automatic gear knob with its staircase grille.


The V8, compared to current AMGs, is barely audible at idle. Once we put on the D and start rolling, it becomes clear that the 500E has nothing to do with a sports car. The car is quiet, it moves effortlessly, but for the most part the gearbox is very sluggish, kick-down doesn't happen with the necessary alacrity, to the point where you wonder if Porsche really had anything to do with this car.

In reality, the 500E is in a different league. It's infinitely more refined than the BMW M5 E34 or RS2. The Mercedes is built to cross the continent at heart-stopping speed in surprising comfort. We sink the right pedal, wait for the gearbox to downshift a couple of gears and the imposing Mercedes comes to life. The V8 carries us towards the horizon in an addictive combination of power and torque. It accelerates from 0-100 km/h in 6.5 seconds and reaches a top speed of 250 km/h (self-limiting).

The 500E is a competent car, but it doesn't stand out in any one area, it's very homogeneous. This doesn't mean it's a bad chassis, on the contrary, it can handle almost any situation. The steering is not a model of precision, but it is quick and direct enough for its level of performance. The roll is not very marked, thanks in part to the self-levelling suspensions, and its stability and poise are impressive for a car of this weight (1.7 tonnes) and performance, thanks to the widened tracks (+37 mm at the front and +38 mm at the rear).

Even so, it's not made for twisty roads, where the intrusion of ASR and inertia detract from its agility. Its favourite terrain are motorways and fast roads where we can feel how, despite the high speed, the car sticks to the asphalt in fast corners and pulls without stopping (if it's not raining), that is, it seems to go on rails. Literally.


For many, this car will be an unknown and even difficult to see it on the street, it is so discreet... However, with its visual simplicity and its powerful V8 is, for many others, the ideal car. In my particular case, it happens to be one of the first cars I was able to "test drive". It was in France and the car in question had its age, but it seemed indestructible. The 500E has a special aura about it and will soon be a much sought after classic. So much so that there are a couple of colleagues in my profession who have one and while they don't all use them as much as they would like to, none of them are thinking of selling theirs. If you see one for an affordable price, which there still are, don't hesitate a moment.

At the end of 1994, Mercedes launches a limited series of the E500, which in a display of originality is called Limited. Only 500 units would be available, only in black or silver grey, and equipped with 17" rims whose design imitates the rims of the Mercedes 190 that raced in DTM. The 500 units of the E500 Limited were sold exclusively in Switzerland (or almost), which gives us an idea of how peculiar is the Swiss market despite its small size.

Throughout 1993 and 1994, AMG produced 12 E60s based on the 500E/E500. The V8 was upped to 6 liters and power output topped out at 381 hp, allowing it to do 0-60 mph in 5.5 seconds. As AMG already had partnership agreements with Mercedes, genuine E60 AMGs carry the code "957 AMG Package" in their VIN number. After the E500 went out of production, AMG did other conversions, but on used cars and no longer on new models. Be careful not to confuse the E60 AMG with the legendary Hammer. The latter are earlier than the 500E and are characterized by their body kit with flared wings. 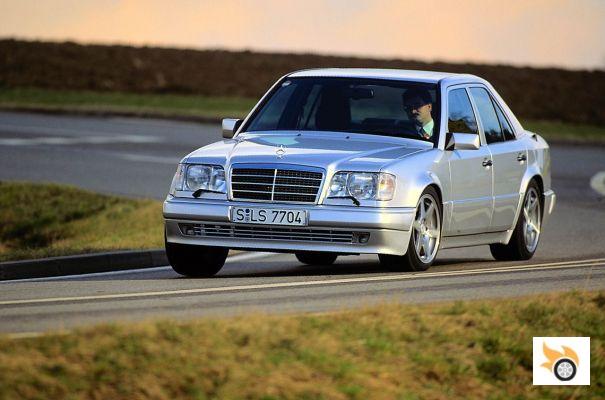 Mea culpa, or the responsibility of the motoring journalist when it comes to prescribing ❯