Ford Scorpio, or the failure of the generalists in the premium segment.

The Ford Scorpio arrived two years after the Ford Sierra. This D-segment sedan designed by Patrick Le Quément (who years later would continue experimenting at Renault) exhibited a very aerodynamic style that had already been announced with the Probe III concept car at the Frankfurt Motor Show in 1981. The Scorpio, recovered the elongated platform of the Sierra while its design was also inspired by the new Ford sedan. To emphasize its positioning as a high-end car, Ford included ABS (a Teves) as standard across the Scorpio range. At the time, and for a mainstream manufacturer, it was quite an event. 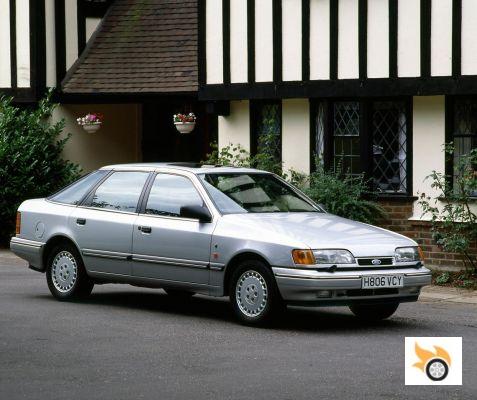 The Scorpio's arrival was positively received by the press, so much so that the Scorpio was voted European Car of the Year in 1986. Among its qualities were its habitability, an excellent driving position and a dynamic behaviour far superior to that of the Granada. The Scorpio is equipped with a sophisticated multi-link rear suspension (another Ford innovation at this level of the range). The proposed engines do their job, without more; especially the entry-level 4-cylinder of the then already old-fashioned "Pinto" family.

The choice of a 2-volume body did not seem the most successful, except in France. Classic looks already seemed to prevail in this segment, while practical aspects were relegated to second place. Compared to its rivals from truly premium brands, such as the Mercedes 230E or the SAAB 9000, the quality of workmanship and materials used did not stand the Scorpio in good stead. 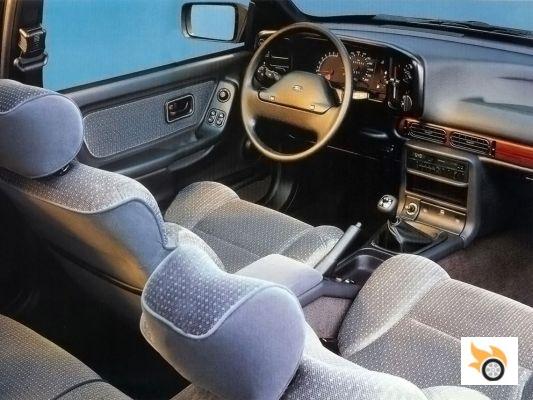 Even so, the Scorpio had a successful commercial career. It was even sold in the United States under the Merkur label - just like the Sierra - available through the Lincoln and Mercury dealer network. Tailored to American tastes, the Scorpio was presented as "the German premium car", a reference to its Cologne provenance. The local press liked the car, but the sales network was unable or unwilling to sell these models from a label created expressly for European Fords. 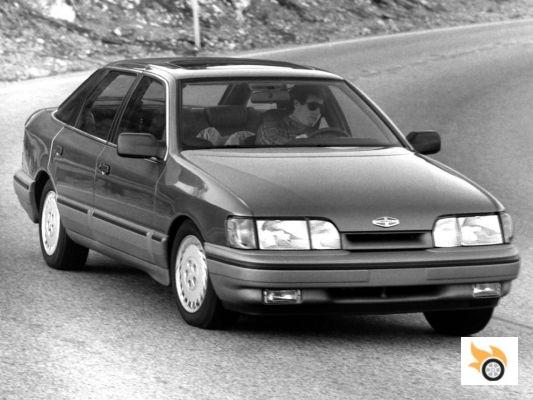 In 1989, Ford updated the entry-level 4-cylinder Scorpio. It now had a twin-shaft engine which, although it had no more character than its predecessor, did consume much less fuel. The following year, Ford rectifies the design of the Scorpio and proposes a classic 3-body body. Long, elegant and classic, as the canons of the segment dictate, the Scorpio also offers improved equipment, or so its leaders believed. While the leather upholstery might have been a good compromise in the early years, the genuine plastic faux wood trim that was supposed to give the interior a touch of luxury fooled no one (except Ford's management, of course).

Are we renewing or not? 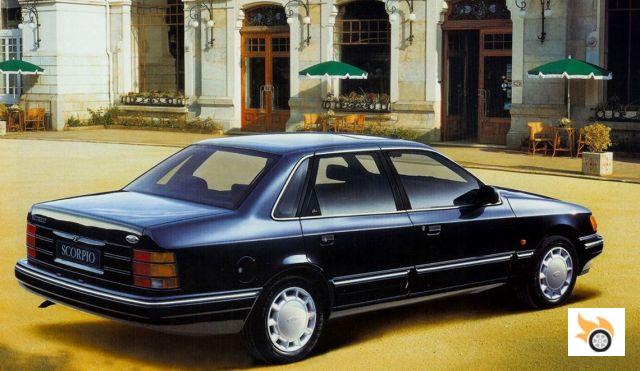 In the mid-1990s, Ford had to decide whether or not to renew the Scorpio. At that time, large sedans were not selling as well as they used to, suffering from competition from MPVs. While in the second half of the 1980s the Renault Espace and Chrysler Voyager were alone, in the mid-1990s their rivals multiplied. PSA and Fiat then proposed the Peugoet 807, Fiat Ulysse, Lancia Zeta and Citroën Evasion, while Ford itself, in partnership with Volkswagen for the occasion, prepared its Ford Galaxy, the blue oval's version of the VW Sharan and SEAT Alhambra. Even General Motors is joining the party with the Opel Sintra, seeing the unexpected success of the Pontiac Transport in Europe.

The minivans responded to the need for a large car for the whole family. The clientele that used to buy a large D-segment car for reasons of habitability (interior and boot) now prefers to buy the original and versatile MPVs. D-segment buyers are increasingly doing so as a statement of their social status. They used to prefer brands such as BMW, Mercedes, Audi and even SAAB or Alfa Romeo. 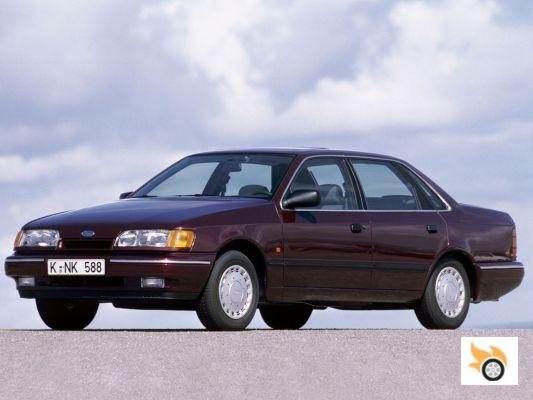 As the decline in sales in this segment is not yet drastic, Ford decided to renew the Scorpio. But they do it with a minimal investment: the new Scorpio retains the platform, structure and a good part of the mechanical elements of the previous generation.

Basically, the new Scorpio is technically almost identical to the previous one, Ford can't bet on tech to sell their car, so they'll have to do it with design. It's unclear if there were more flattering proposals than the final proposal that resulted in the final Scorpio II design, but the public and press reactions to seeing the design of the new Ford was almost all shock and disgust. Car even had the front page headline "who did it?", seeking responsibility for a brand that the British have always considered theirs (although everything has long since been decided in Detroit and Cologne). Today, it is still considered one of the ugliest cars in history. With the passage of time, I have to admit that it is not as ugly as the first generations of SsangYong Actyon and Rodius. 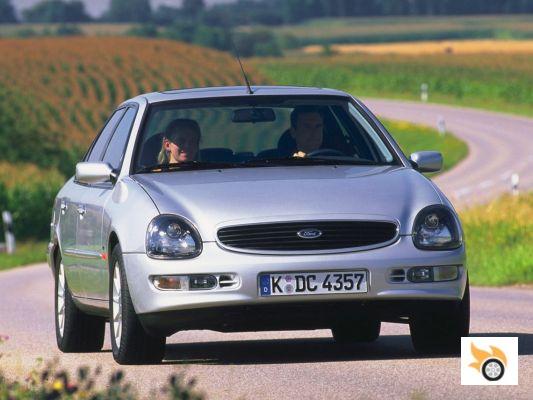 The shape of the headlights is such that you can't figure out what shape they are: oval? bell-shaped? In the end it doesn't matter, because they don't fit with the side of the car - where you can see the doors and windows of the Scorpio I - nor with the rear and its Lincoln Town Car airs melted under the sun. And for the record, the rear is the one that always seemed to me the most successful of the whole car.


On board, it didn't get any better either. The Mondeo-inspired dashboard still relied on shiny, gleaming plastic wood. Otherwise, the poor Scorpio II had nothing to fight with: the interior was almost identical to the previous one, while the competition was much more recent and offered cozier and more spacious cabins.

The Scorpio II never exceeded 100,000 units sold between 1994 and 1998, when it was withdrawn from the market. That's a figure far below what Ford had planned. 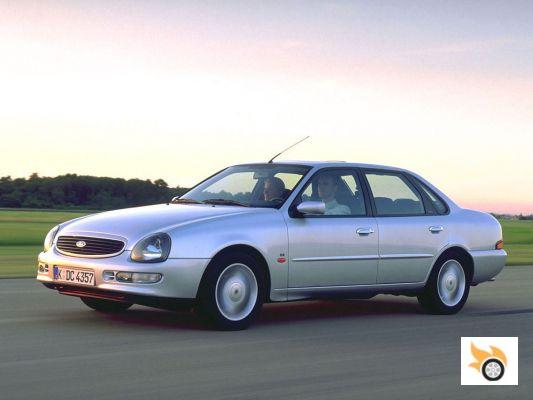 The Scorpio's strange and convoluted design is the typical example of how the generalist manufacturer was looking for a third way to convince the public and thus avoid a direct confrontation with the German premium trio. And that third way has always been aesthetic originality. While Citroën has a certain legitimacy in its originality thanks to the DS and SM, nobody understood very well how Renault dared with the VelSatis, nor Lancia with the Thesis or Opel with the Signum. What's more, the aesthetic originality of the Citroën DS and SM was based on an original technological innovation, while all the others offered cars of the most conventional technical level (sometimes even underpowered) under that original bodywork. Every attempt at "premium" by a generalist has failed since then. 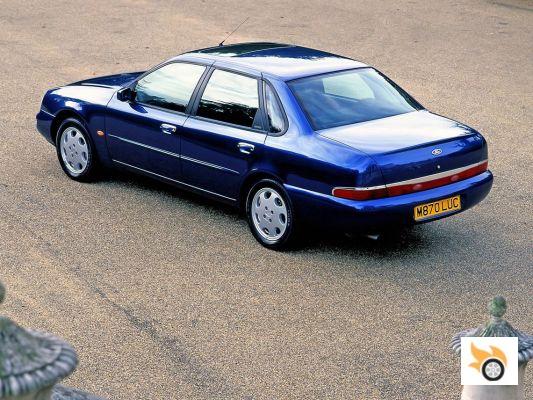 All of them? Not exactly. Seeing that the Europeans kept trying to do something original to attract the premium public, i.e. offering something they didn't like or ask for, Toyota decided to create Lexus to offer a product that, at the time of its launch, lacked any originality but met almost all the expectations of the premium customer. In 1989, the brand's first model arrived, the Lexus LS. Unashamedly inspired by the Mercedes S-Class, it was an instant success in the US and blazed a trail in Europe.

Instead of telling customers "you are sheep, look how original we are", as the generalists did, Lexus took the opposite approach. "I'm not original, that's true, but I do everything you ask of me and more (technology, quality, reliability, classicism, elegance, etc.)". We all know today who was right, but that's another story.

add a comment of Ford Scorpio, or the failure of the generalists in the premium segment.