Classifying the Swift is a bit complicated by its dimensions. Only measures 3.84 meters long (1 cm less than the previous generation Swift), is very small to be a B, but in habitability is above average and in that length no one offers more trunk: 265 liters (55 more). In terms of size it's somewhere between an A+/B-, but in terms of quality it's clearly in the B-segment. In terms of power and driving feel, technology and equipment, too. In many respects it's a very smart investment.

Compared to its predecessor, it's 40 mm wider (the Japan model isn't) and 15 mm lower. Passengers also ride closer to the ground (21 mm at the front and 25 mm at the rear), so there's no loss of roominess, and it's also increased. The axles are 20 mm further apart. The engineering exercise is brilliant, because the new platform (Heartect) manages to reduce weight by 120 kg! by using higher strength steels. The Swift weighs 840 kg at best, less than several lower category models. 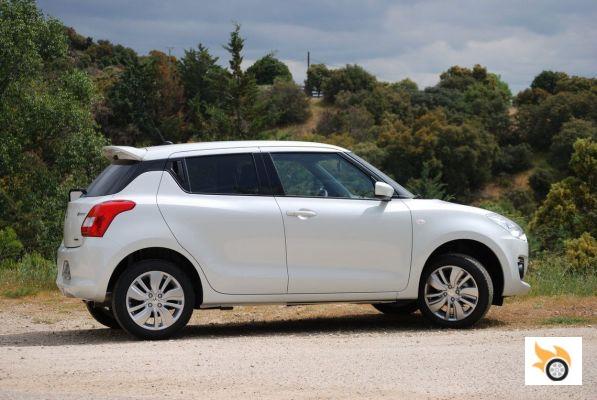 This optimisation is noticeable in fuel consumption, less mass, less effort. In addition, aerodynamically it is 8% more efficient, so the difference gets bigger the faster you drive. The design is quite continuist, true, but improves in the obvious and not so obvious. The floating roof with those black pillars and the simulation of a wedge in the C-pillar quickly catches the eye. As in the 2010 model, is a less feminine design, the 2005 Swift was bought mostly by women.

In our country does not reach the simplest model (GL), all Swift come with 16-inch alloy wheels, the GLE have them normal and GLX polished with black two-tone. You can also tell the GLE from the GLX because the latter have all LED headlamps, the GLE still uses standard bulbs in the tail lamps and the LED lights are outside the main headlamp. The unit tested is GLE, as it's the only possible combination with all-wheel drive (AllGrip), but I'll talk about that later.


It can be chosen with seven body colors and four two-tone combinations (black or gray body/roof), always with five doors.

Inside, the driver will appreciate a simple and functional design, where things are quick to find and there is a lot of coherence in the lines: circular elements abound. In addition, the controls are oriented towards the driver by 5 degrees, making it more ergonomic. It has a clear and simple instrumentation, in the case of the GLX has a multifunction display with graphics, the GLE does not draw attention in that regard. All Swift cars that come to Spain have a touchscreen with Bluetooth, stereo, mobile integration (Android Auto, Apple Carplay and Mirrorlink), browser (standard on GLX, optional on GLE), radio, etc.. 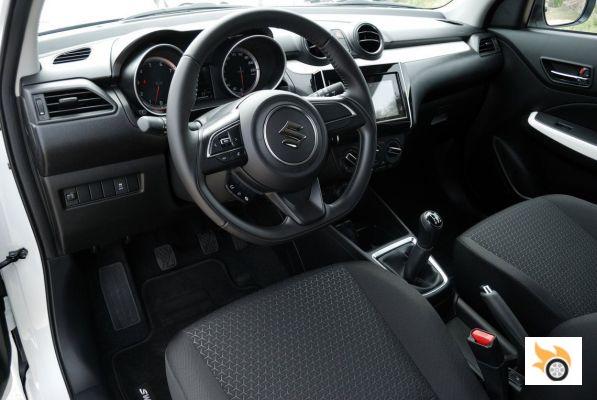 No objections to the interior. The car is well finished, there are no rattles or poorly finished edges, the appearance is solid and looks quality. In addition, there are numerous pockets to empty your pockets even in the rear seats. The seats provide more than adequate support for the Swift's approach, and it's not difficult to find a good driving position. It's easier to sit in the GLX because the steering wheel also adjusts in depth, in the GLE only in height.

I can't speak so highly of the rear seats. First downside: there is no central headrest in the GLE, something I criticized 10 years ago and now I do it even more strongly. But that's not all, when I sat in the side seats I was very disappointed: the headrests are a simple foam padding without any internal metal structure. I doubt their effectiveness in the event of a rear-end collision. EuroNCAP hasn't yet assessed this model, but it may well be able to show its colours: the rear headrests are now being tested.


The rear seats of the Swift GLE leave a lot to be desired in passive safety.

It's a shame that for such a small detail (which ends up not being so) the quality of the rest of the car is tarnished. Apart from this problem, they are very correct in terms of available space, even for the hips in the case of sitting five people. The GLX has three conventional headrests, with their internal structure and adjustable in height (and folding). Therefore, I strongly recommend going for the more equipped models, they are safer for rear occupants. 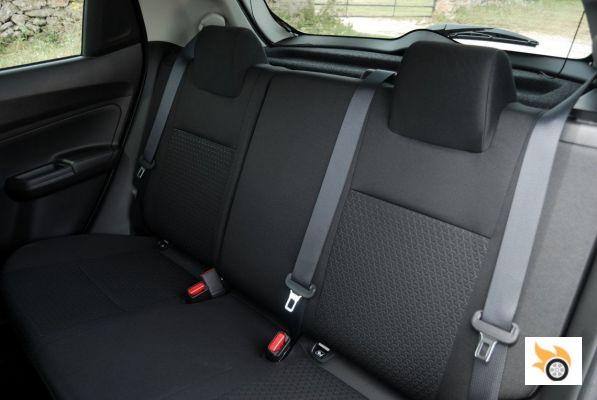 The truth is that the Suzuki Swift is a model in which safety -at least in the top model- has been taken care of. In addition to the usual systems, there is a video camera with laser (DSBS) that is able to activate automatic braking, switch to low beams when the high beams can dazzle others, give fatigue warning and warn the driver that he is going to leave his lane without activating the turn signal. In addition, and this is not common in the B-segment, the GLX has front radar with active cruise control (ACC), a luxury! The GLE lacks all these features.

Speaking of safety, it's good to mention that all-wheel drive gives extra reassurance in certain parts of the country where the weather isn't kind. The Swift is the only non-SUV in the category that allows you to choose all-wheel drive. The Swift AllGrip has a viscous differential, meaning that when there is a loss of traction on the front axle, power is transferred to the rear. On a clean road it is difficult to appreciate its advantages, but in this case the rear suspension is independent.


Who will most notice the advantages of all-wheel drive is who has to fight regularly with rain or snow. Off-road it is a car with little distance to sleep, where it can defend itself with dignity with a little mud, but little more. If the road is complicated then you will miss the high suspension of a model like the Ignis or Jimny. Suzuki is clear, it's not an SUV and doesn't want to be one. All Swift AllGrip have GLE finish, 1.2 90 hp engine and five-speed manual transmission. Lentils, take them or leave them. 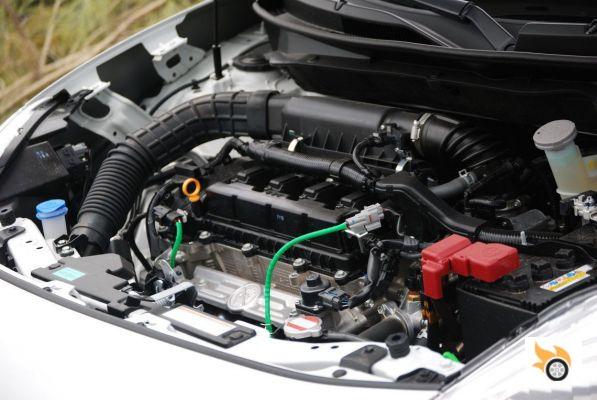 There are two engines for the Swift, both petrol; it doesn't need a diesel. On the one hand there's the 90bhp 1.2 DualJet, with multi-point injection and no turbo, and the 111bhp 1.0 BoosterJet, a turbocharged three-cylinder with direct injection. An automatic version (1.2 with CVT, 1.0 with torque converter) or the SHVS hybrid system is available for both engines. Suzuki claims best-in-segment fuel economy versus 100% gasoline or semi-hybrid models. No version pays registration tax.

With the 90 hp engine the Suzuki Swift is a lively and agile car, no rocket, but with two adults moves almost a ton. The five-speed gearbox has somewhat long gear ratios, but the engine has enough power to recover decently even in fifth gear. As Colin Chapman said, it's better to reduce weight than to put power. A reduction of 120 kg in such a small car is very noticeable and commendable, it is not easy to lose so much weight without drastic changes.

Around 30% of the Suzuki Baleno that are being sold are hybrids, those responsible for the brand have not specified whether the Swift can happen the same. Of course the hybrids carry the ECO sticker and are exempt from the limitations of circulation in Madrid and Barcelona with high pollution. In addition, the regulated parking is cheaper for these models. The Toyota Yaris Hybrid has a tough competitor: with a very light and very cheap system, consumption is significantly reduced, and without giving up the manual gearbox; it drives like any other car. 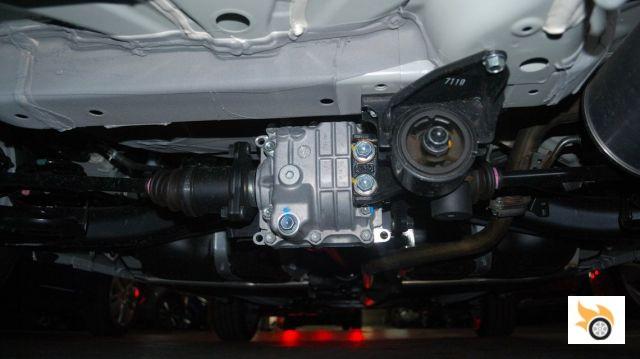 We haven't driven the Swift for long, but the preliminary impressions are positive. With the lengthened wheelbase, it feels settled and stable on the road, with no bad reactions. This, and what has dropped in weight, is enough for driving the current model and the outgoing should be noticed differently, at least in theory, because I have not tasted the previous generation. The power steering feels a little soft, but that's not exactly uncommon in this class.

The GLEs have rear drums, the GLXs have disc brakes.

On the other hand, the pace of the test was rather quiet, especially after seeing two mobile radars along the way. From here I thank Suzuki for putting the driver change point exactly where an Exeo with the infamous black cone was hiding. If it hadn't been for that, I could have been fined 50 euros if I hadn't wandered off. They could have caught anyone there, this radar was a kilometre and a bit away from another one that was very visible: you couldn't even smell it in my direction of traffic.

Anecdotally, the 90 hp 1.2 engine, even with all-wheel drive, is quite thirsty. The average fuel consumption meter danced between 5.5 and 5.7 l/100 km of petrol. With a more efficient driving and the hybrid system, I think it's quite feasible to go under 5 l/100 km real, so who wants a problematic petrol car? It's a good thing it consumes little, because the fuel tank is tiny: 37 litres. You have to stop to refuel more often, but it consumes less euros. It doesn't have Stop&Start. 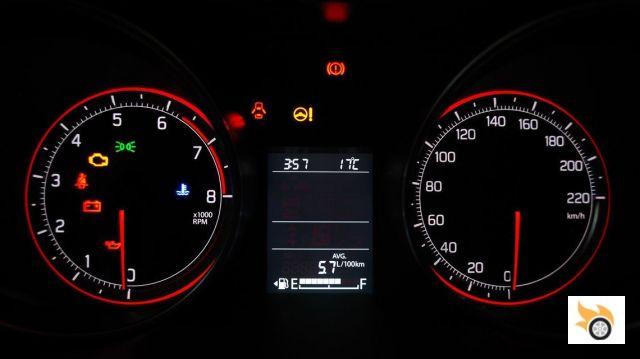 The 111 hp three-cylinder engine is more lively and driving is less demanding on the gear lever, as we saw in our test drive of the Baleno. As is often the case with these engines, it does vibrate noticeably more, but it has a more funky sound. If you have a heavy foot it will easily spend more than the 1.2, which is perfectly understandable. If you combine it with the SHVS system, we are talking about the only hybrid with turbo and manual gearbox on the market.

Prices start at 12,250 euros and the most expensive does not reach 17,000, accessing finance the brand reduces 1,000 euros. Hybrids are always associated with the highest finish, manual transmission and front-wheel drive. The warranty is five years, and that must be added that it is manufactured in Japan, the Hungarian plant will focus on the Vitara and S-Cross. A sportier version will arrive later in the year, with the 140bhp 1.4 BoosterJet engine - at least - and settings more focused on spirited driving. 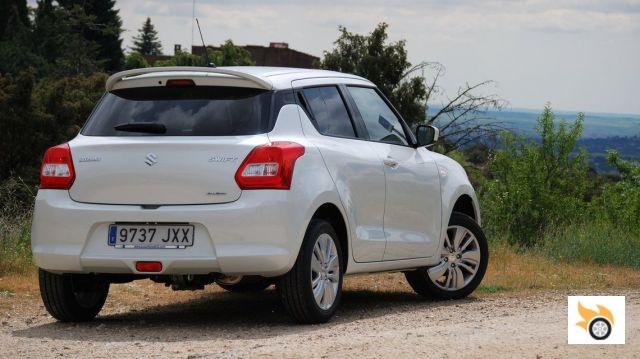